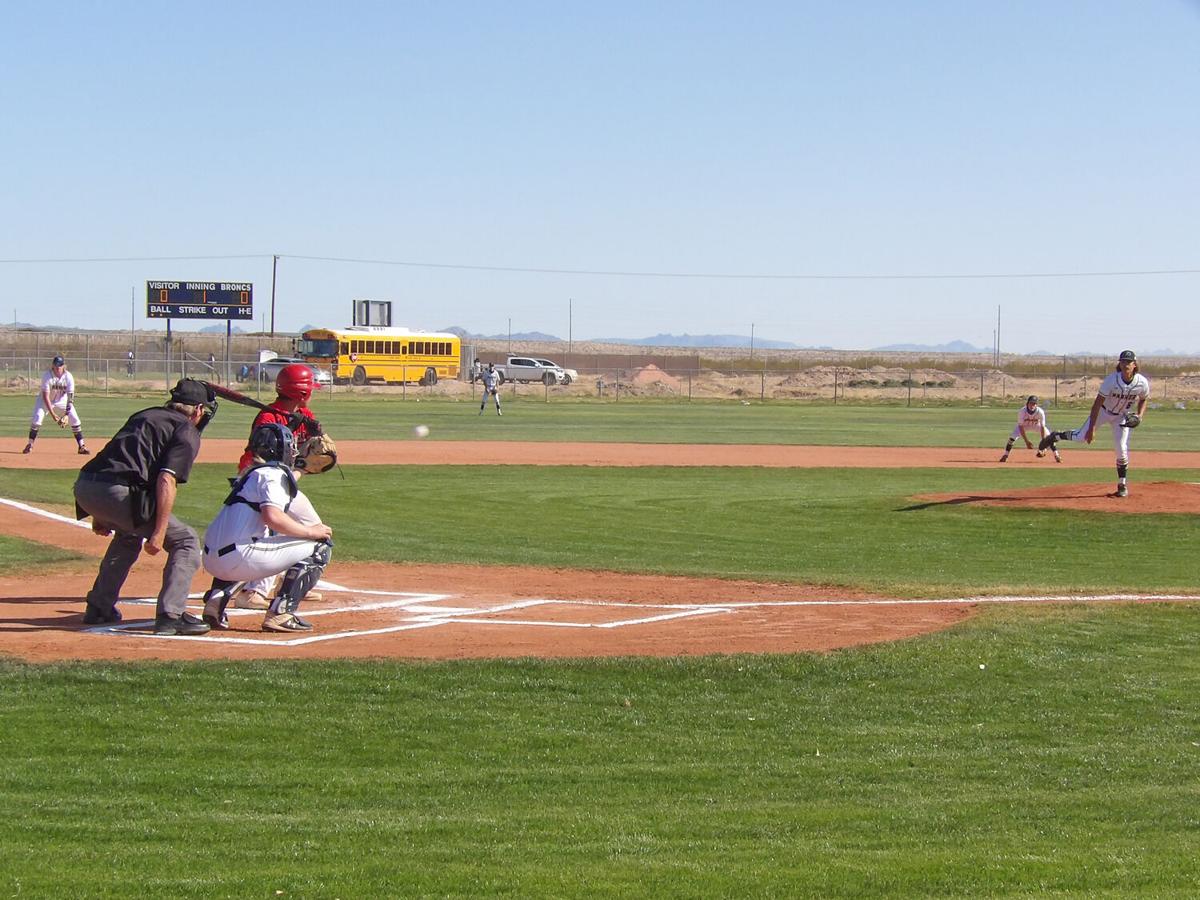 Parker’s Cameron Poole pitches to the first batter in the Broncs’ home opener March 24 against the Florence Gophers. After taking an early lead, the Broncs would go on to lose, 11-4. 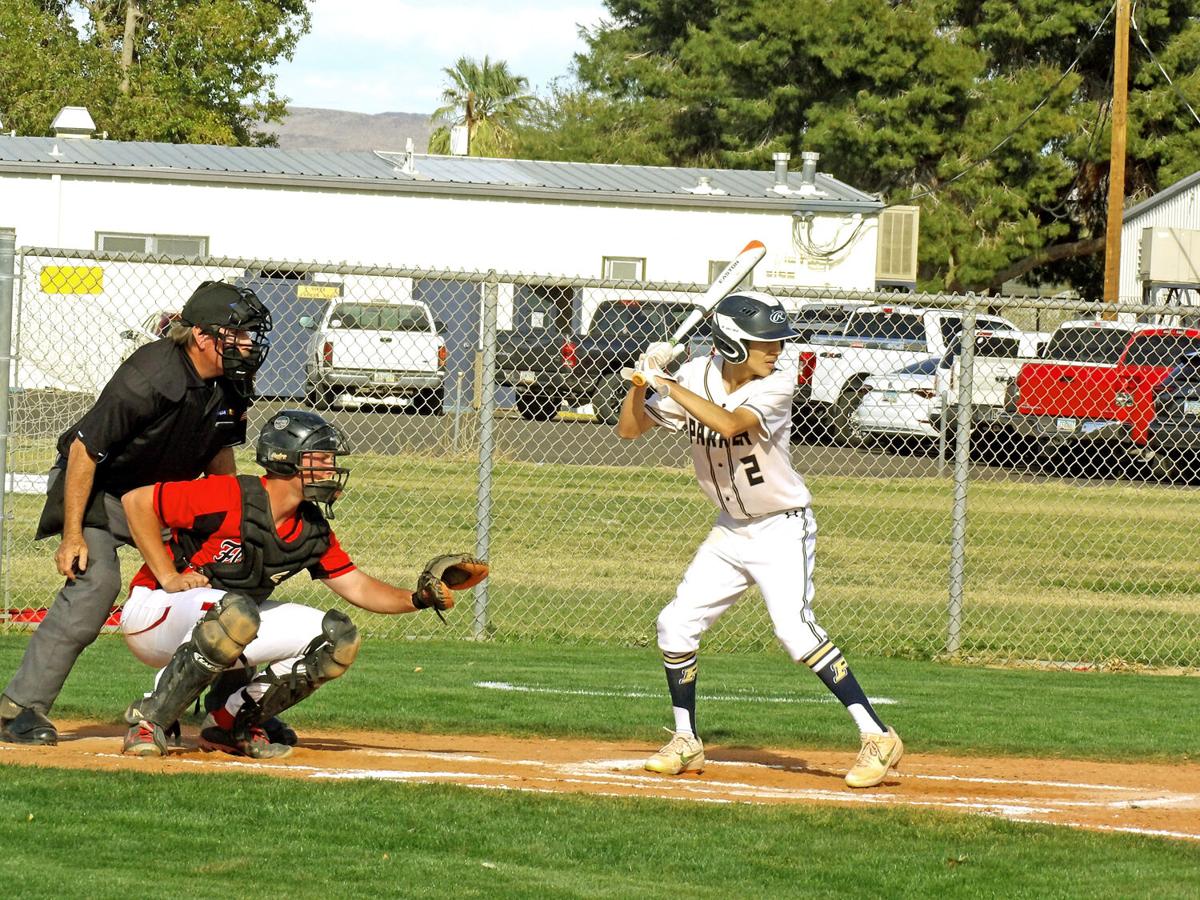 Parker’s Matthew Rodriguez looks ready for a pitch in the Broncs’ game against the Florence Gophers March 24. 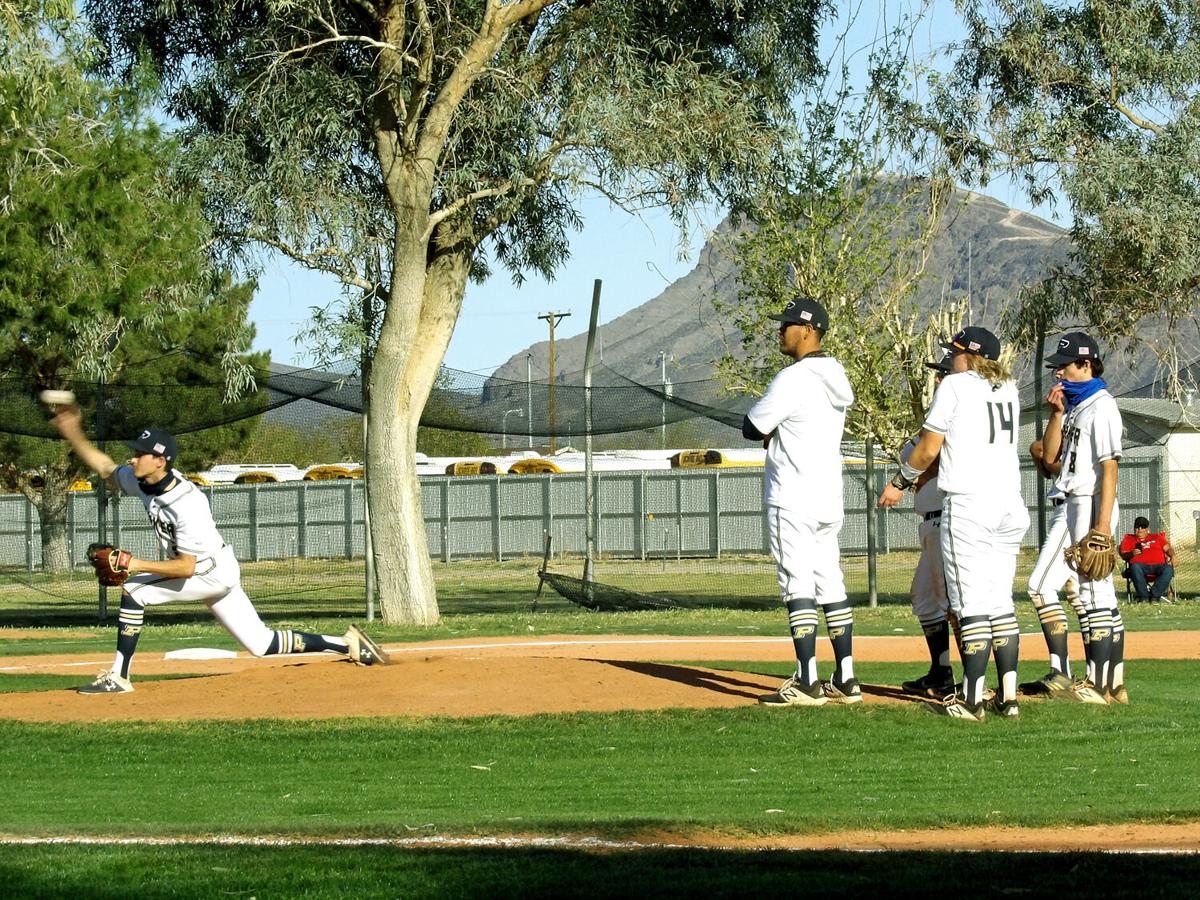 Matthew Rodriguez came in to pitch in relief in the sixth inning against Florence March 24. He warmed up under the watchful eyes of Coach Sean Golding (no number) and his teammates.

Parker’s Cameron Poole pitches to the first batter in the Broncs’ home opener March 24 against the Florence Gophers. After taking an early lead, the Broncs would go on to lose, 11-4.

Parker’s Matthew Rodriguez looks ready for a pitch in the Broncs’ game against the Florence Gophers March 24.

Matthew Rodriguez came in to pitch in relief in the sixth inning against Florence March 24. He warmed up under the watchful eyes of Coach Sean Golding (no number) and his teammates.

The rough times for the Parker Broncs’ baseball team continued last week as they had three losses. They lost a close one to the Antelope Rams of Wellton, 6-5, March 23 on the road, and then had two losses at home. They lost their home opener to the Florence Gophers, 11-4, on March 24 and then lost to the River Valley Dust Devils, 15-4, on March 26.

The game against Florence started out well, as the Broncs scored two runs in the bottom of the first to take a 2-0 lead. Matthew Rodriguez singled and advance to second on a passed ball. Joe Martinez walked, and both runners advanced a base on a sacrifice ground out by Armando Flores. Both runners scored on a single from Cameron Poole.

The lead didn’t last long, as the Gophers scored two in the second and one in the third to take the lead. They got a fourth run in the fourth inning and Tyson Ross was sent in to relieve Parker’s starter, Poole.

After adding another run in the fifth, the wheels came off for the Broncs in Florence’s half of the sixth inning. Three hits, a walk, and three hit batters led to five runs. Parker Coach Sean Golding sent Matthew Rodriguez in to relieve Ross.

The Gophers added one more run in the top of the seventh, and the Broncs scored two in the bottom of the seventh. Gage Honomichl singled and Zavier Zeyouma was hit by a pitch. Both scored on a single by Rodriguez.

Golding remarked that the team was playing a better seven innings than they were the week before. He said the Florence game started out well, with the Broncs scoring two runs in the first.

Against River Valley, the Broncs again got off to a 2-0 lead in the first inning. The Dust Devils responded with six runs in the second inning. The Broncs score two more runs in the third inning, it looked like they were going to keep it close. Then, the Dust Devils score nine runs in the next two innings to take a 15-4 lead. The Broncs didn’t score in the bottom of the fifth, and the game was called when the 10-run “mercy rule” was invoked.

As for individual performances, Gage Honomichl scored two runs against Antelope, while Joe Martinez had a double and Tyson Ross and Jason Rodriguez each had two stolen bases.

Against River Valley, Matthew Rodriguez and Joe Martinez each had two hits, and Martinez scored two runs. Collin Stanton and Armando Flores each had a double.

The Broncs are now 0-1 against 3A teams and 0-5 overall. They haven’t faced any of their 3A West rivals yet this season. They’ll have their first region games this week as they face the Odyssey Institute Minotaurs twice. They’ll be at home Tuesday March 30. Game time is 3:45 p.m. They’ll play the Minotaurs again Thursday, April 1 on the road. As of March 28, the Minotaurs are in first place in the 3A West, with a 3-0 record against 3A teams and an overall record of 4-0.

Here are the standings in the 3A West. Teams are listed by records in the region, records against 3A teams and their overall record. Explanations for tie-breakers and standings anomalies are explained.

Registration for Kindergarten, screening for K-Prep April 16 and 17

The Parker Broncs’ baseball team is still winless on their 2021 season. They playe…