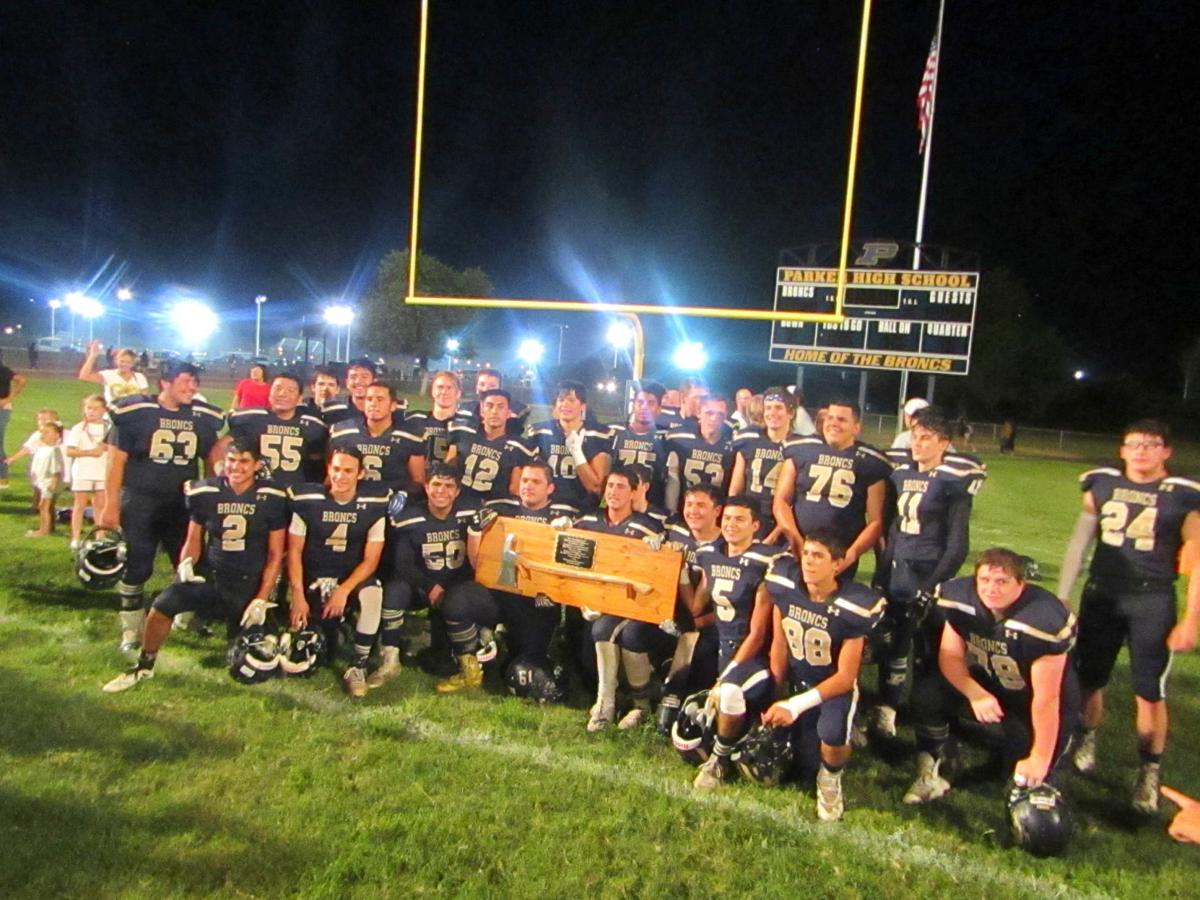 The Parker Broncs’ football team made it to the state playoffs and hosted a playoff game for the first time in years. They are seen Aug. 30 with the firefighter’s axe they won back from the Wickenburg Wranglers with a 36-6 win. 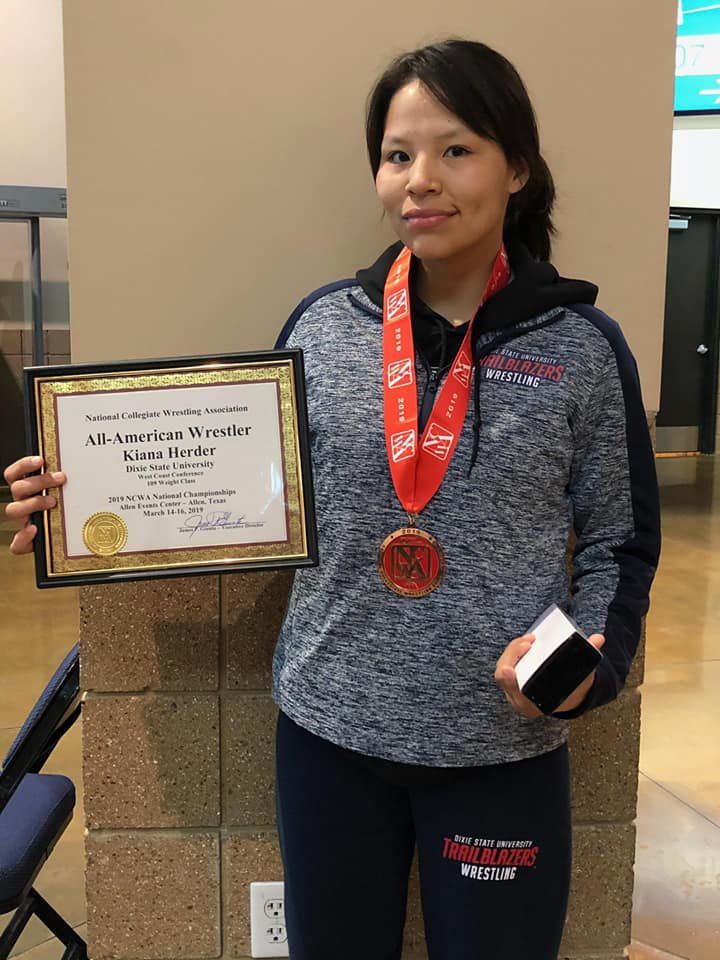 The Parker Broncs’ football team made it to the state playoffs and hosted a playoff game for the first time in years. They are seen Aug. 30 with the firefighter’s axe they won back from the Wickenburg Wranglers with a 36-6 win.

The Parker Broncs’ football team had one of their best seasons in years, going 3-1 against their 2A Verde opponents and 9-1 overall. They reached their state playoffs and hosted a playoff game for the first time in years. The Broncs defeated the Antelope Rams, 20-0, Nov. 8 in the first round of the playoffs. They were eliminated from the playoffs the following week, when they lost to the Santa Cruz Valley Dust Devils of Eloy, 50-12.

For many of the players, the highlight of the regular season came Aug. 30, when they defeated the Wickenburg Wranglers, 36-6, to win back the firefighter’s axe that is the trophy for the games between the two long-time rivals.

They were called the Yellow Cord Boys. They were eight young men who played football for Parker High and graduated in 1960. The surviving members gathered for a reunion Oct. 11 during Parker High’s homecoming.

They were named the Yellow Cord Boys because, in their senior year, they wore yellow corduroy pants that looked like their gold football pants. They decorated the pants with school spirit slogans.

It was a difficult season for Parker Broncs girls’ volleyball, but they still managed to make the state playoffs.

The Broncs finished the regular season with a record of 5-3 against their 2A West opponents, 6-4 against other 2A teams, and 12-5 overall. They were ranked No. 9 in the state in 2A in AIA power points. They won a play-in game with Desert Christian to reach the state tournament. They fell in the first round to Scottsdale Prep.

The Broncs’ Demi Durham was named the 2A West Region Player of the Year. She also made the 2A All-State First Team.

Broncs’ cross-country made their presence known

The Parker Broncs’ cross country team was small, but they made sure the opponents knew they were there. Curtiss Felknor often placed in the top 10 at meets on the boys’ side, while Aleesha Begaye remained the Broncs’ top girl runner.

They lost in the first round of the state playoffs to another 2A West team, the Arizona Lutheran Coyotes, 67-57, Feb. 15. The Broncs defeated the Coyotes twice in the regular season.

The Parker girls finished the 2018-2019 regular season with a 6-2 record against their 2A West opponents, which was good enough for second place. The Broncs were 7-5 against other 2A opponents and 9-9 overall. They often did not have a full team for games because they were dealing with injuries all season.

They qualified for a state 2A tournament play-in game, but lost that game Feb. 13 to Phoenix Country Day School, 69-26.

Two Broncs were named to the 2A West All-Region First Team:  Alicia Briones and Tallia Robledo. Robledo has become the Broncs’ top scorer so far in the 2019-20 season.

The Broncs ended the 2018-19 soccer season with a record of 2-3-1 against their 3A Northwest region opponents, which put them in fourth place. They were 4-7-1 overall, and were ranked 33rd in the state.

While they did not make the playoffs, they ended the season and a four-game losing streak in spectacular fashion, defeating the River Valley Dust Devils, 11-0, Jan. 24 in Mohave Valley.

Two Broncs, Aaron Gonzalez and Jesus Saucedo, were named to the 3A Northwest All-Region First Team.

It was a rough two days for the four Bronc wrestlers who made it to the state meet held Feb. 7 and 8 in Prescott Valley. Only one of the Broncs, Jose Diaz, managed to get beyond the first day of competition.

In the double-elimination tournament. Philpot went 0-2. Solorio won his first match, and then lost his next two. Taylor lost his first, won his second, and lost his third.

Diaz went 2-2 and advanced to the quarter-final round before he was eliminated. His final match was a thriller, going to double overtime.

In just her freshman year in college, a former Parker High student has achieved a high award:  she has been named an All-American. Kiana Herder, PHS Class of 2018, placed fourth in the 109-pound weight class in the National College Wrestling Association National Championships held March 14-16 in Allen, Texas.

Herder said she was thrilled to represent Parker and to do so well at the national tournament.

Herder is a freshman at Dixie State University in St. George, Utah. During the regular season, she competed in the 116-pound class. She went 7-4 with two pins, and was the NCWA West Coast Conference Champion in her weight class.

Herder has other interests besides wrestling. She was involved in La Paz Youth Pageants at the Gingerbread House, and was crowned Miss Teen Parker in 2017.

The Parker Broncs baseball team went 7-1 against their 2A West opponents to win their region title. They qualified for the state tournament with an 11-0 win over the Sedona Red Rock Scorpions April 30 in Parker. The game was called after five innings due to the “10 run” rule.

The Broncs were eliminated from the state playoffs when they lost to the Alchesay Falcons, 5-2, May 3.

The Broncs girls’ softball team was definitely improved over the 2018 version. They finished the season with a record of 3-5 in the 2A West, which put them in fourth place. They were 6-6 against other 2A teams, and 6-13 overall. They won two more games than they did in 2018. They were ranked No. 22 in Arizona Interscholastic Association power points. The end came May 1 when the Broncs lost to Chandler Prep, 15-4, in a state tournament play-in game.

Despite the results of the play-in game, Coach Dan Maya said the Broncs had a great season. They qualified for the postseason, something they hadn’t done in quite a while.

The Parker Broncs track team took more athletes to the state meet this year than they have in a long time. While they had no state champions, they did have some athletes who placed in the top 10 in their events, and some who placed in more than one event. This put them among the state’s elite athletes.

The best finishers for Parker on the boys’ side was the 4 x 400 relay team of Jesus Saucedo, James Parks, Manuel Najera and Axel Gonzalez. In the finals, the finished sixth with a time of 3:33.59.

In individual events, Saucedo placed eighth in the 200-meter dash finals with a time of 23.79 seconds. He almost cracked the top 10 in the 100-meter dash, finishing 11th at 11.58 seconds. His time was less than one-third of a second off the state champion.

Jason Amador was Parker’s top jumper as he placed eighth in the long jump with a leap of 19 feet-11.25 inches. He and Najera tied for ninth in the triple jump as they reached 40 feet-4 inches.

On the girls’ side, Demi Durham placed eighth in two events. She cleared 4 feet-10 inches in the high jump and she made a toss of 30 feet-10.25 inches in the shot put.

The Parker Broncs’ golf team ended the 2019 season with an average team score of 77 over par for their matches. Coach Chad McKenzie said this was a great improvement over the 2018 average score of 118 over par.

The Broncs’ best match came April 23 against the River Valley Dust Devils in Mohave Valley. The Broncs were 55 over par for nine holes, which was 21 strokes better than the Dust Devils. Devin Donley, Brayden Page and Ethan Sale all had scores of 47, the best for their high school careers. This was the second time this season Page came in under 50, and the first time for Donley and Sale. They’re the only Broncs to have scores lower than 50 this season.

This came after a mix-up when the team was told they couldn’t use the golf course where the match was originally scheduled. They and the Dust Devils were sent to another course.

McKenzie said this made the team better appreciate Steve Benton, Art Gonzalez and the rest of the staff at their home course, the Emerald Canyon Golf Course.

Jacoby Ellsbury, a member of the Colorado River Indian Tribes who spent part of his childhood growing up in Parker, was released by the New York Yankees Nov. 20. He broke in with the Boston Red Sox in 20017 and signed a $153 million free agent contract with the Yanks in 2014.

He had his best seasons with the Red Sox. In 2011, he was healthy for the entire season and hit 32 home runs, batted .321, and had 105 RBI. He had 212 hits and scored 119 runs. He was named to the American League All-Star team and placed second in the balloting for AL Most Valuable Player.

UPDATE: ADOT has postponed this work for approximately two weeks. They said they'l…

This Martin Luther King, Jr. Day, all Arizona residents will get free admission to…

Downtown Experience to be held Jan. 22