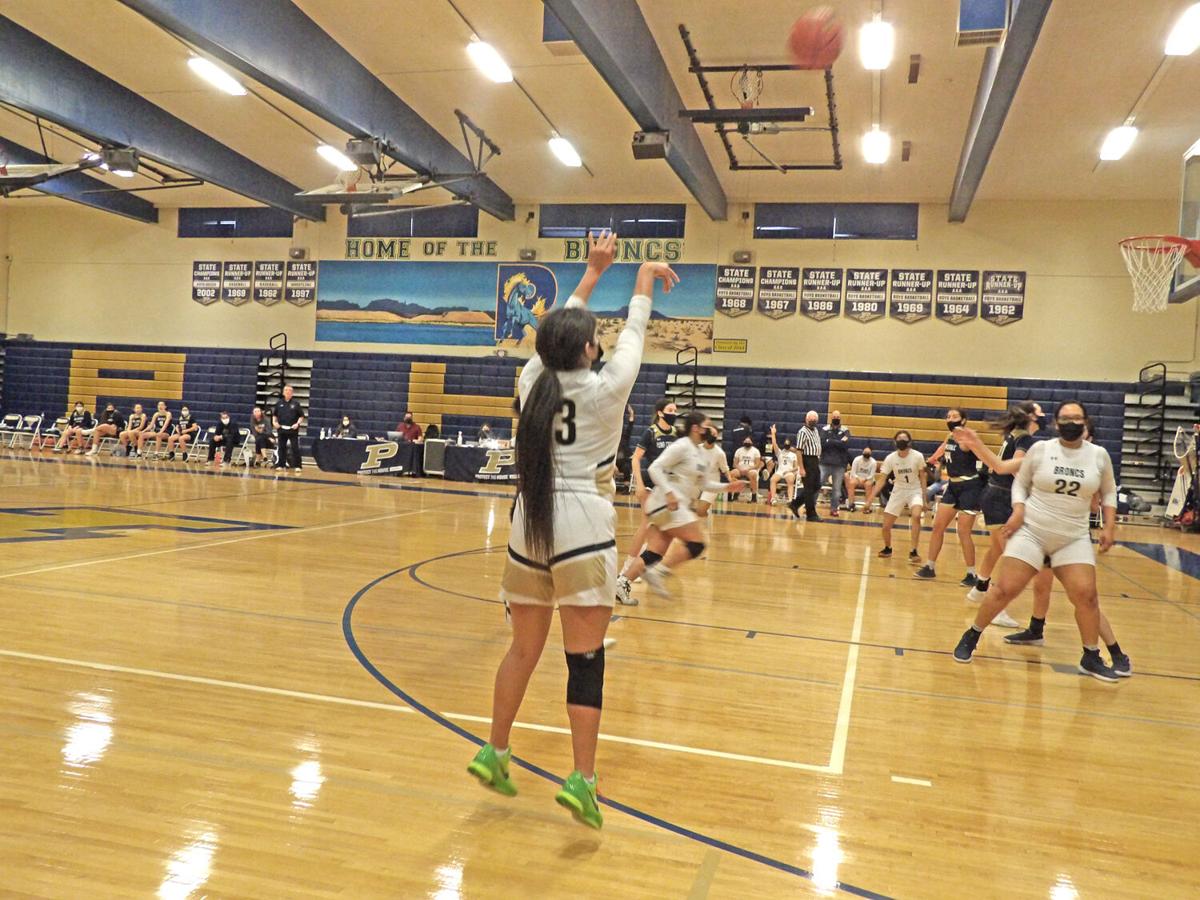 Parker’s Tyra Robledo gets off a shot in the Broncs’ game with the Yuma Catholic Shamrocks Feb. 12 in Parker. Robledo would score 25 points as the Broncs lost, 69-64. They came close to handing the Shamrocks their first loss of the season. 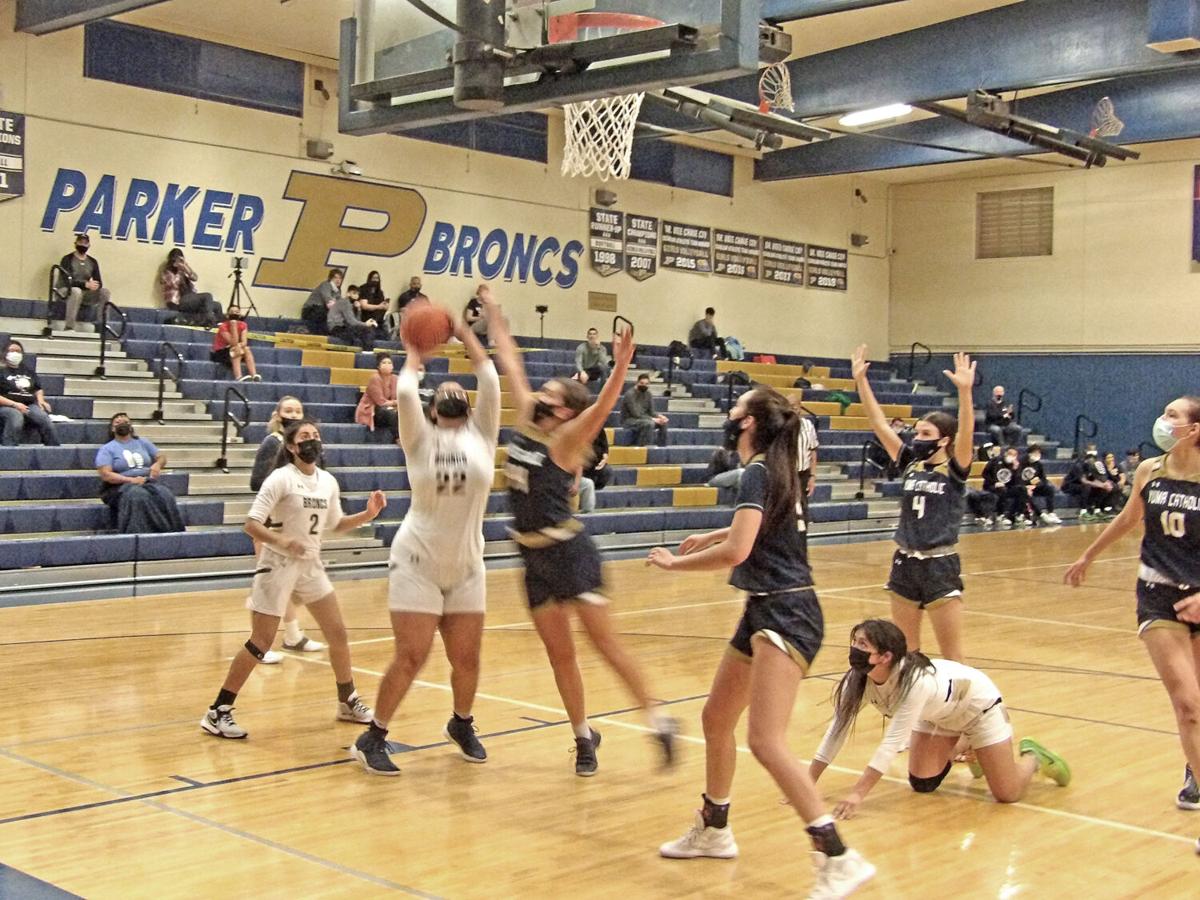 The Parker Broncs’ Ernee McCabe (22) tries to get a shot on the basket against the Yuma Catholic Shamrocks Feb. 12 in Parker. The Broncs looked much better in a 69-64 loss than they did in earlier loss this season to the Shamrocks.

Parker’s Tyra Robledo gets off a shot in the Broncs’ game with the Yuma Catholic Shamrocks Feb. 12 in Parker. Robledo would score 25 points as the Broncs lost, 69-64. They came close to handing the Shamrocks their first loss of the season.

The Parker Broncs’ Ernee McCabe (22) tries to get a shot on the basket against the Yuma Catholic Shamrocks Feb. 12 in Parker. The Broncs looked much better in a 69-64 loss than they did in earlier loss this season to the Shamrocks.

They went 2-1 on the week, but the most memorable game for the Parker Broncs girls’ basketball team this past week may have been the one they lost. They cave very close to a major upset and almost handed the Yuma Catholic Shamrocks, the top team in their region, their first loss of the season.

Close, but not quite. The Broncs lost to the Shamrocks 69-64 at home on Friday, Feb. 12. That was a real improvement over the 61-30 loss the Broncs were handed the last time these two teams met, Jan. 26 in Yuma.

Parker Coach Kyle Peta said he was very happy with how the Broncs played.

“I can’t complain about the effort,” he said.

The Broncs actually had the lead early in the game, 12-6 in the middle of the first quarter. The Shamrocks had it tied at 12-12 with 1:33 left in the quarter. At the end of the quarter, it was Shamrocks 16, Broncs 15.

The Shamrocks kept pressing in the second quarter, but they couldn’t pull away as the Broncs kept pressing back. While Yuma Catholic had an 11-point lead, 32-21, midway through the quarter, Parker had cut that to 36-31 by halftime.

One minute into the second half, the Broncs narrowed the Shamrocks’ lead to two points, 38-36. Yuma Catholic kept trying to pull ahead, but the Broncs wouldn’t quit. They closed the gap to four points twice in the third quarter, 47-43 with 3:07 left and 50-46 with 1:01 left. Yuma Catholic put on a spurt at the end of the quarter to go into the final quarter ahead by 10, 56-46.

Parker didn’t give up and kept pressing. They narrowed the gap to four points again, 64-60, with 2:03 left, and an upset win for the Broncs looked very possible. However, the Shamrocks matched the Broncs’ final spurt and came away with a 69-64 win.

Tyra Robledo led the Broncs with 25 points. Tallia Robledo scored 16. Casandra Sandoval and De’Andrea Robledo each had 6, Ernee McCabe added 3, and Evelyn McCabe and Alicea Moreno each had 2.

Yuma Catholic’s Kylie Meechaum led all scorers with 29 points. Rori Martinez had 10, Isabei Torok scored 9, Reese Sellers and Hannah Swarthout each had 8, and Rian Martinez had 4.

“We handled the ball better and we handled pressure better,” Peta said of the Broncs. “We forced a lot of turnovers.”

Peta said they still have things they need to work on, and he again praised his players’ work ethic.

“We need to keep moving forward and try to get better every day,” he said.

The Broncs had two other games this past week, and they won both. They defeated the Mohave Accelerated Patriots, 55-29, Feb. 8 in Bullhead City. They then defeated the Kingman Academy Tigers, 67-51, Feb. 11 in Kingman.

Against Kingman Academy, Tyra Robledo had 20 points for the Broncs. Tallia Robledo was right behind her with 19. Ernee McCabe added 10, De’Andrea Robledo and Beth McCabe each scored 8, and Alicea Moreno had 4.

The week leaves the Broncs with a record of 1-3 in the 3A West, 3-3 against 3A teams, and 6-4 overall. They’re in fourth place in the 3A West, but have a chance to catch Wickenburg and Kingman this week to possibly move into second place. They’re ranked 21st in the state.

The Broncs have two games this week. They’ll be in Wickenburg Feb. 16 to play the Wranglers. They’ll be back at home Friday, Feb. 19 to face the Tonopah Valley Phoenix. Game time on Friday is 5:30 p.m.

Here are the standings in the 3A West as of Feb. 14. Schools are ranked by their record in the region, their record against 3A teams, and their overall records.

The Parker Public Library will be holding its sixth annual Celebration of Dr. Seus…

How local racers fared at the Parker 250

It was another rough week for the Parker Broncs boys’ basketball team. They lost a…