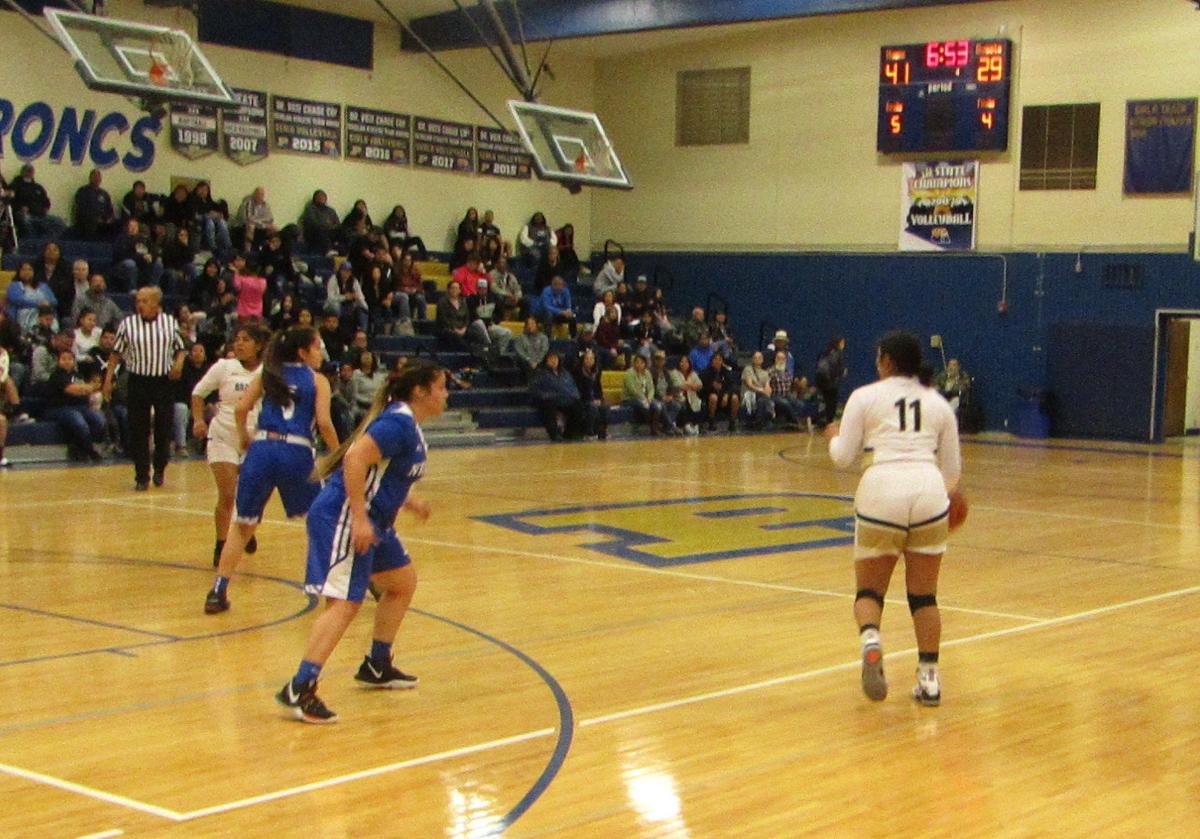 The Parker Broncs’ Tallia Robledo (11) looks to get the ball past Needles, Calif. defenders in the Broncs’ 55-42 win over Needles Dec. 16 in Parker. 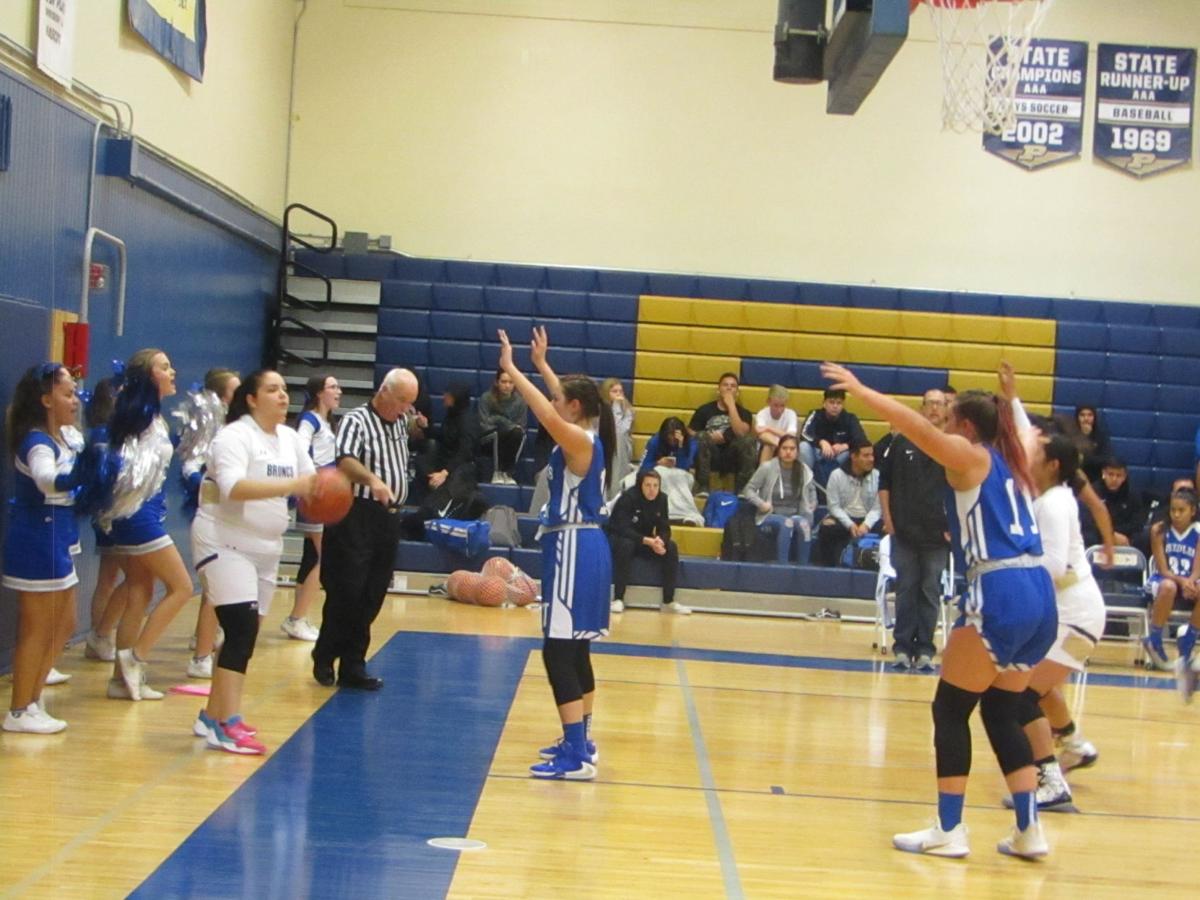 Parker’s Bobbie Esquerra (with ball) is looking for an open teammate as she prepares to inbound the ball against the Needles Mustangs Dec. 16 in Parker. 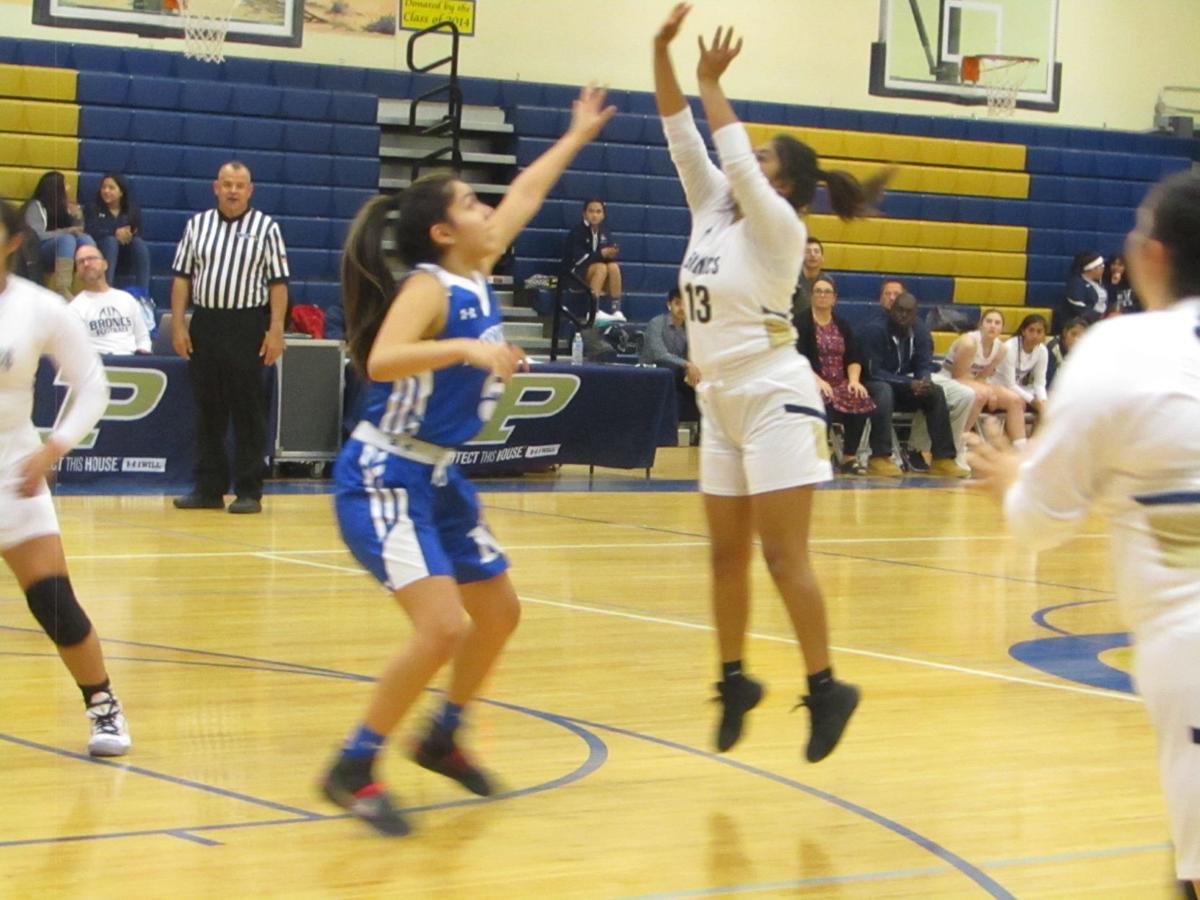 The Broncs’ Kalee Equerra (13) leaps to make a shot against the Needles Mustangs Dec. 16 in Parker.

The Parker Broncs’ Tallia Robledo (11) looks to get the ball past Needles, Calif. defenders in the Broncs’ 55-42 win over Needles Dec. 16 in Parker.

Parker’s Bobbie Esquerra (with ball) is looking for an open teammate as she prepares to inbound the ball against the Needles Mustangs Dec. 16 in Parker.

The Broncs’ Kalee Equerra (13) leaps to make a shot against the Needles Mustangs Dec. 16 in Parker.

The Parker Broncs’ girls’ varsity basketball team started their week with a 55-42 over the Needles, Calif. Mustangs Dec. 16 in Parker. It was a game where the Broncs led most of the way, but they were not really able to pull away until the last minutes of the game.

Coach Larissa Hansen said the team played well, given they were dealing with players who were ill or were dealing with a tragedy that hit their families and community, the fatal accident prior to the start of the parade Dec. 14.

The Broncs got an early lead, and led 16-10 after the first quarter. The Mustangs tied it at 16-16 with 5:45 left in the first half. The Bronc went on a spree that included a three-pointer from Casandra Sandoval, and they led, 28-20, at half-time.

In the second half, the Broncs managed to hold and build their lead through the third quarter, and were ahead 41-25 as the final quarter began. Then, the Mustangs went on a spree of their own. With three minutes left to play, they had closed the gap to just five points, 44-39.

The Broncs managed to surge ahead to 50-40 with just two minutes left to play. Then, the Mustangs got into trouble when they started fouling in the last minute of the game. The Broncs made their free throws, and won it by a 13-point margin, 55-42.

Tallia Robledo led the Broncs with 14 points, but Alicia Briones was right behind her with 14 points. Sandoval had 12, included a pair of three-pointers. Zahrah Schultz scored 10 points, including making six of eight free throw attempts. Bobbie Esquerra had a three-pointer.

Hansen said she was impressed with how the girls played, particularly on defense.

The Broncs followed this win with their most lopsided game so far this season:  a 48-9 win over the Santa Cruz Valley Dust Devils Friday, Dec. 20 in Eloy. The Dust Devils are having a difficult season, and are currently 0-9 overall. The nine points they scored represented their lowest for the season. The previous low was in a 79-10 loss to the Florence Gophers Dec. 2. The most they’ve scored in a game so far this season was 26 in a 42-26 loss to Veritas Prep.

The Broncs are now 1-1 against 2A teams and 4-2 overall. They’re in second place in the 2A West due to Tonopah Valley having a better record (2-1) against other 2A teams.

These two games marked the Broncs’ last games before the winter break, and their last regular season games in 2019. They’ll play in the Yvonne Johnson Memorial Tournament Dec. 27. Their next regular season game will be Jan. 9, 2020, when they face the Heritage Academy Heroes of Laveen at home. This will also be their first region game. Game time for varsity is 5:30 p.m. They’ll face the Santa Cruz Valley Dust Devils the following evening at home, again at 5:30 p.m.

From the Dugout: Hey! That’s cheating!

I have a new theme song for the Houston Astros:  “Your Cheatin’ Heart.”

The Iranians made a terrible mistake when they shot down that Ukrainian airliner. …

Editorial: Institutionalized racism, or how the government used mortgages to mandate housing segregation

On Monday, Jan. 20, we celebrated the life and legacy of the Rev. Dr. Martin Luthe…

Downtown Experience to be held Jan. 22