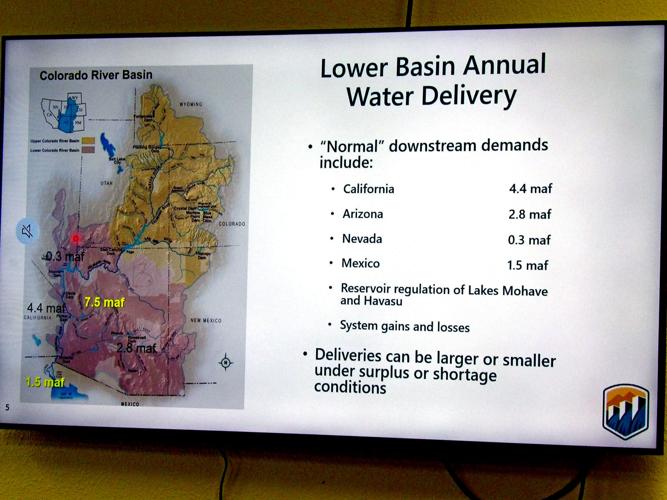 The Bureau of Reclamation met with area residents May 3 to explain what they do. This slide from their Power Point presentation explains how Colorado River water is allocated. 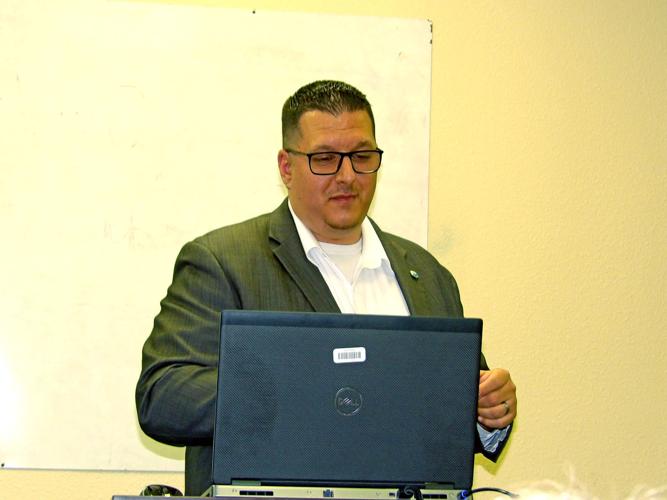 Reclamation’s Mike Bernardo led the presentation at the meeting May 3.

The Bureau of Reclamation met with area residents May 3 to explain what they do. This slide from their Power Point presentation explains how Colorado River water is allocated.

Reclamation’s Mike Bernardo led the presentation at the meeting May 3.

The U.S. Bureau of Reclamation is in charge of managing the Colorado River, a river on which many in the Southwest depend. They are trying to manage orders for water from that river and maintain the ecosystem while, at the same time, dealing with the region’s worst drought in recorded history.

That was the message Reclamation’s Mike Bernardo and Noe Santos delivered to a public meeting held Tuesday, May 3, at the La Paz County Boating Safety Center. The meeting had been arranged by La Paz County District 2 Supervisor Duce Minor so residents could hear from Reclamation directly and ask them questions.

The first part of the problem is the Colorado River is over-allocated, they said. A total of 16.5 million acre feet is allocated each year. The historical average flow through the river is 16 million acre feet per year. With the recent drought, the annual flow is currently about 13 million acre feet.

Bernardo said engineers and hydrologists recognized that flows would vary from year to year, so they built storage reservoirs like Lake Mead, Lake Powell and Lake Havasu to accommodate four times the average flow on the river. That way, they would have water to cover those years where there was less flow.

The water shortage can be seen in the fact that rock formations and other geographical features that had been submerged since these dams were built are now plainly visible. The City of Las Vegas, Nev. has had to extend its intake lines as the water level of Lake Meade has dropped below the level of the lines. On May 1, a barrel containing the body of a murder victim was found in Lake Meade as a result of the dropping water levels. The body had been submerged and hidden for more than 40 years. In published reports, the police are trying to identify the victim. Judging from the clothing, they said it looked like the victim was killed sometime from the mid-1970s to mid ‘80s.

Bernardo and Santos said they are working with the states to promote conservation. While, under legislation from 1928, the Secretary of the Interior is the “Water Master” for the river, the water legally belongs to the states involved.

“The water belongs to the states,” Bernardo said. “Reclamation is just a facilitator.”

One of the conservation ideas is “water banking.” Bernardo said it used to be that a user had to use their full allocation or they risked losing it. Under water banking, they don’t need to use all of their allocation. They can keep some it in reserve in Lake Meade. He said this has encouraged efforts like those of the Metropolitan Water District of Los Angeles to conserve water and develop new technologies like cleaning effluent so it can be pumped into the groundwater.

There were questions regarding Reclamation’s operations and how and when they decided to release water. Bernardo and Santos said that depends on scheduled deliveries of water that’s been ordered. This is why water releases and water levels vary greatly over the year. He added they also try to release more water for hydroelectric production at peak hours. This means utilities don’t have to purchase power on the open market.

Bernardo said much of Reclamation’s funding comes from revenue from hydroelectric power.

When asked about Headgate Rock Dam on the Colorado River Indian Reservation, Bernardo said the dam is operated by the Bureau of Indian Affairs as a diversion dam for irrigating the CRIT reservation. He said they work closely with BIA on water releases.

Another question was directed at Marcus Dickerson, the manager of Parker Dam. He was asked when vehicles with trailers will be allowed to cross the dam. He replied that some are already allowed. They have to be no wider or longer than the vehicle that’s pulling them, and they must be open, not enclosed.

“If a trailer meets those requirements, it should be allowed,” he said.

Dickerson said larger vehicles can’t cross the dam because the roadway is so narrow.

“It’s not a regulation roadway,” he said. “If vehicles are too wide, we could see a situation with a fender bender on the dam.”

At the end of the presentation, Minor thanked Bernardo and Santos. He said he appreciated the information they presented, and added that residents asked some good questions.

Bernardo described what they do and like “threading a needle.”

“We try to meet everyone’s needs,” he said. “We can’t make everyone happy, but we do the best we can.”

A few days after the meeting, Minor offered this link where people could see a video of the meeting as well as the Power Point presentation:  http://co.la-paz.az.us/607/Bureau-of-Reclamation-5-3-22-Meeting

tell me again what they do? manage water? another agency that failed in its job......

whoopsie! thats a problem! water rights are all about seniority, if i remember right......

Editorial: It’s no wonder why people have a low regard for the U.S. Supreme Court

Reclamation meets with residents to explain what they do.