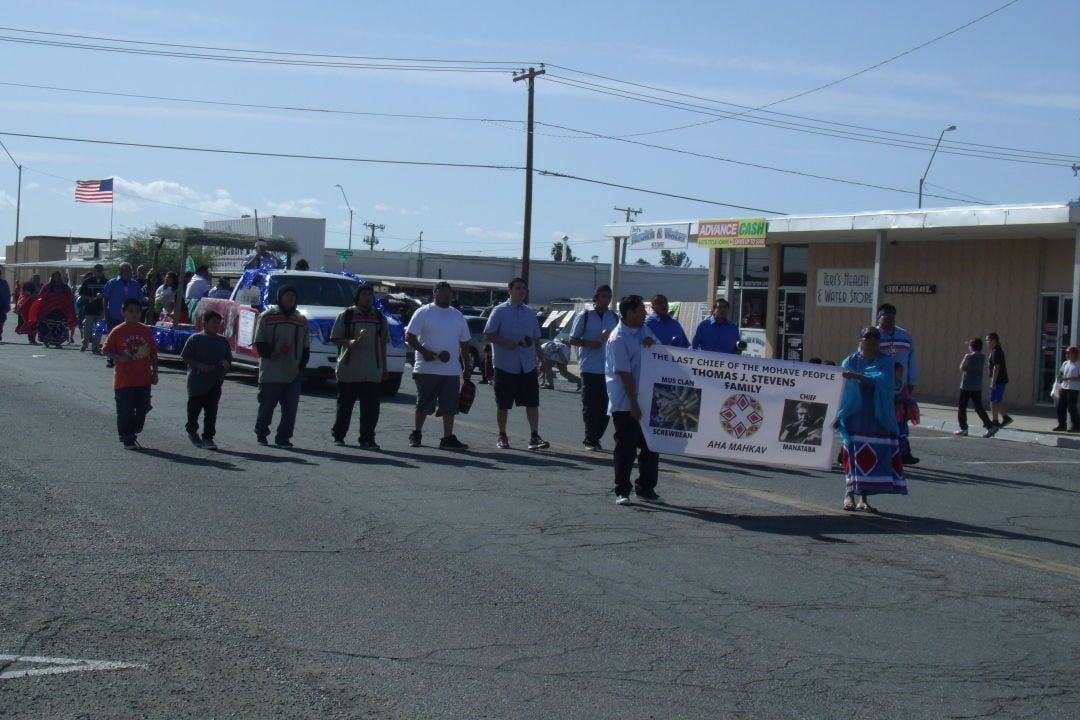 The family of the late Thomas J. Stevens, the last Chief of the Mohave people, marched in the CRIT 150th Anniversary Parade held Feb. 28. 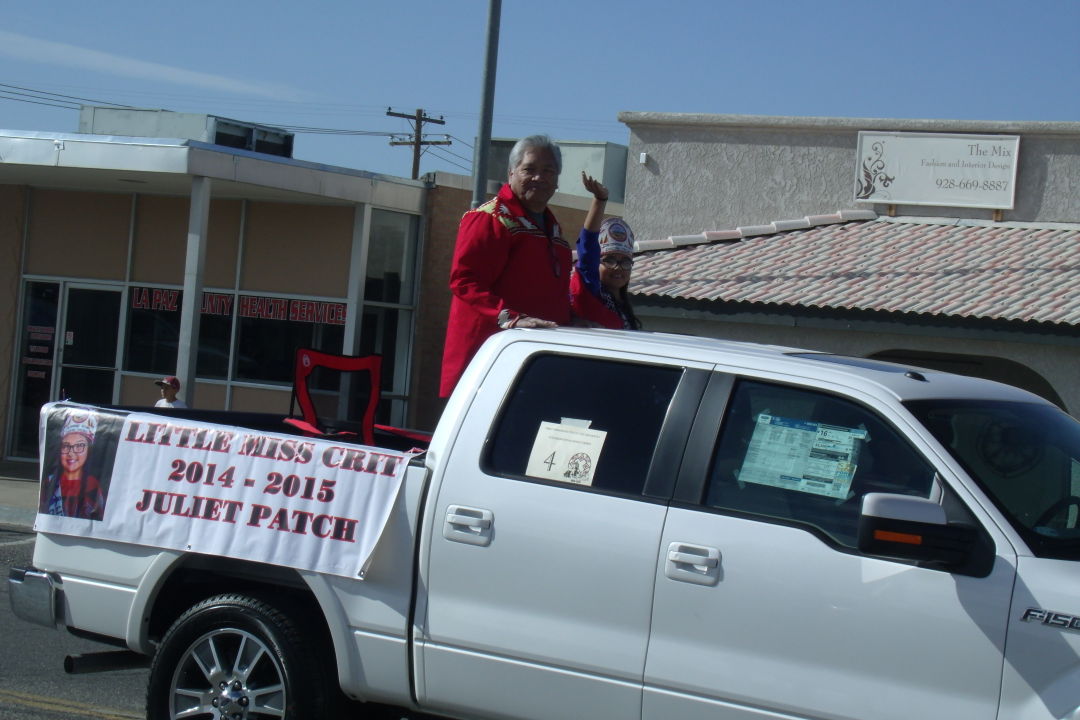 The family of the late Thomas J. Stevens, the last Chief of the Mohave people, marched in the CRIT 150th Anniversary Parade held Feb. 28.

Patch spoke to the audience and stated how blessed he felt to be there. He also spoke about leadership and why he respected the tribal elders.

“Some people would think we’re lucky, as we have this river and 220,000 acre feet of water,” Patch said. “But we have had great leaders, like Chief Irataba. He made sure the Mohaves stayed on land they had lived on since time immemorial.”

Patch said the late Pete Homer Sr. told him they did the best with what they had. He said he respected the elders for all they’ve done to make the reservation what it is today.

“I learned, ‘don’t think you’re so smart. You only see what we have here now,’” Patch said.

Patch noted others have come to the reservation. There were the Chemehuevis after their land was flooded for Parker Dam, the Japanese internees during World War II and the Navajos and Hopis who came after the war.

Tsosie spoke of the past and the future of the reservation. He noted the culture is always changing. He added the CRIR is unique in American history in that they have not lost any land.

Tsosie said Native Americans need to tell their own stories. He said he sees too many young people not talking to each other. They need to talk to each other, learn their history, and understand what came before them.

“Our history is one of success and improvement,” Tsosie said. “It is unique and powerful.”

Tsosie said Irataba understood the Mohave people would need to keep fighting to keep what they had. He said the future could see the reservation embattled, as they face pressure to give things like water and land away. He said the Tribes needed young leaders who would be able to stand up to these forces.

Tsosie said young tribal members need to understand their history so they will know where they came from and what forced their ancestors and elders overcame. He said he’s seen how young people had reinvigorated bird singing and dancing.

“Our people have achieved tremendous things,” Tsosie said. “We are a people who are unconquered.

Each of the members of the Tribal Council took his or her turn at the podium. Treasurer Valerie Welsh-Tahbo said the fashion show later that evening was meant to educate young people in the culture. She said Native culture and language would be lost if not taught to young people.

Secretary Amanda Barrera said the CRIR is unique in that more than one tribe is here. She encouraged parents to instill their history in their children.

Councilman Herman TJ Laffoon said it must have been like a nightmare when Irataba and Manataba went to Washington, D.C. during the formation of the reservation, but they went because they were leaders. He said great leaders have always fought for the tribes, and great leaders never give up.

Councilwoman Amelia Flores said elders needed to tell their stories to the younger generation. She urged young people to listen to the elders.

“You’ll cherish those moments,” she said. “The elders won’t be around forever.”

Councilman Granthum Stevens said the Mohaves have been on this land since time immemorial, and they are still fighting for this land.

Councilman Johnson JD Fisher thanked the crews who set up the event. He also thanked God for giving their ancestors foresight for the current generation. He thanked all who served in the military, especially U.S. Army Pfc. Ara Tyler Deysie, who was killed in 2008 in Afghanistan. Fisher said this was the first time he’d lost someone who was in the military.

Fisher noted the Mohaves were never conquered or relocated, and he expressed hope for the future.

“We are a strong and beautiful people,” he said. “We’re always going to have that better generation ahead of us.”

Councilman Johnny Hill Jr. began his comments by speaking in the Chemehuevi language. Hill is one of a handful of people in the world who are still fluent in this language, which was taught to him by his grandmother.

Hill said it was important for people to keep their language.

Hill said parents need to set an example for their children.

“Be what you want your children to be,” he said.

Harper spoke to the audience and said he was surprised to be named Chairman of the Mohave Elders Committee as there so many others who were ahead of him in preserving culture and history. He praised leaders like Thomas Stevens, the last Chief of the Mohaves; Pete Homer Sr., who pushed for economic development; and Edward Swick, who had the foresight to see the need for a dialysis center.

Harper praised his grandmother, Mamie Harper, who pushed for the government to take care of elders.

Invited guests who spoke included Parker Mayor Dan Beaver. He said the Tribes have much to be proud of and as someone raised in Parker, he was influenced by Tribal elders. He said Thomas Stevens was a friend of his father, Marion Beaver. Others who influenced him included Rex McKinley, Henry Little and John Scott.

Beaver said he congratulated the Tribes and added this was a time of celebration for all.

La Paz County District 1 Supervisor D.L. Wilson, whose district includes much of the reservation, congratulated the Tribes and wished them a “happy time immemorial.”

State Rep. Sonny Borrelli also congratulated the Tribes, and said he felt honored to be there.

The event was preceded by a Presentation of the Colors by The Freeman H. Sharp American Legion Post 70. The opening prayer was given by Sheldon Swick, who spoke in Mohave.

With federal grant, UA out to get more Native Americans into medicine

Growing up in Chinle, Arizona, the heart of the Navajo Nation, Kim Russell said she never saw the same physician twice.

The weather looks good for next week, with highs mostly in the 70s and overnight l…