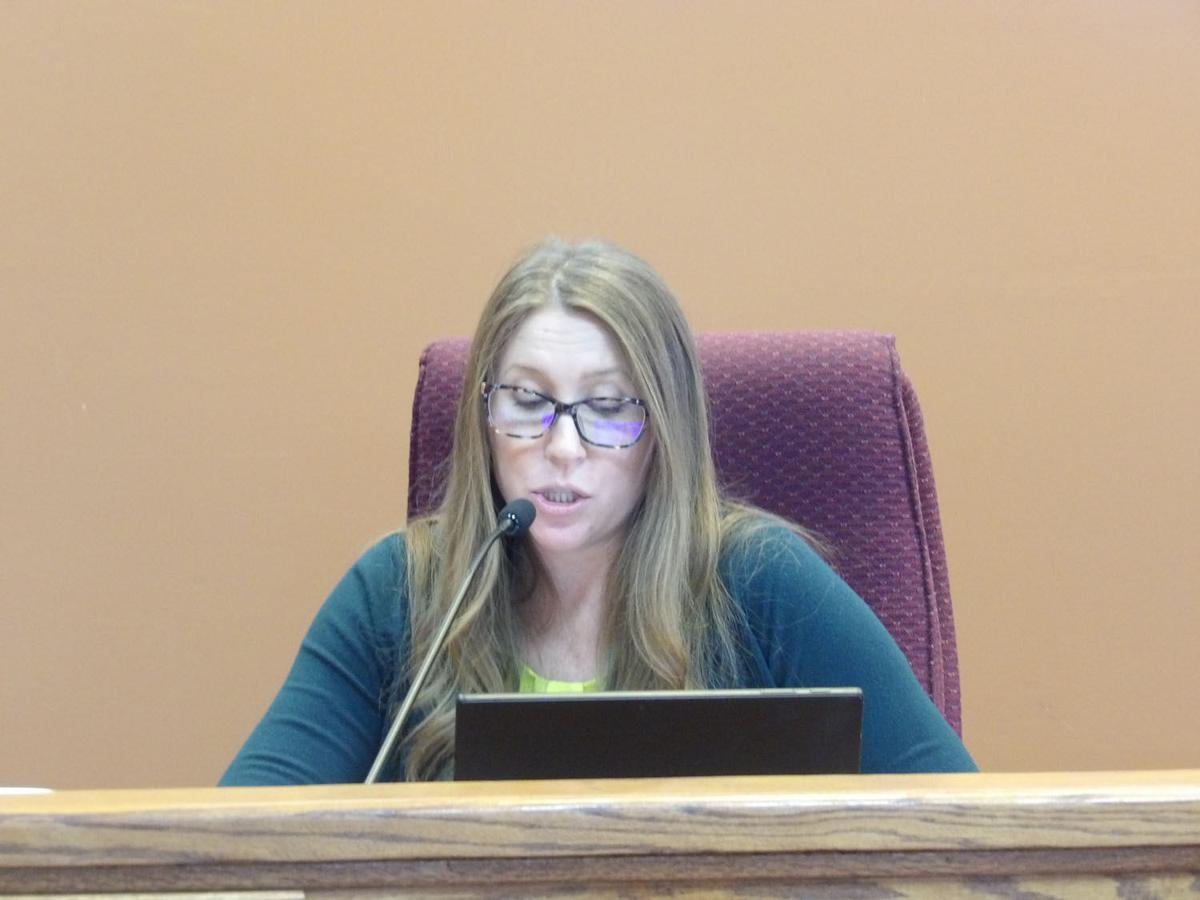 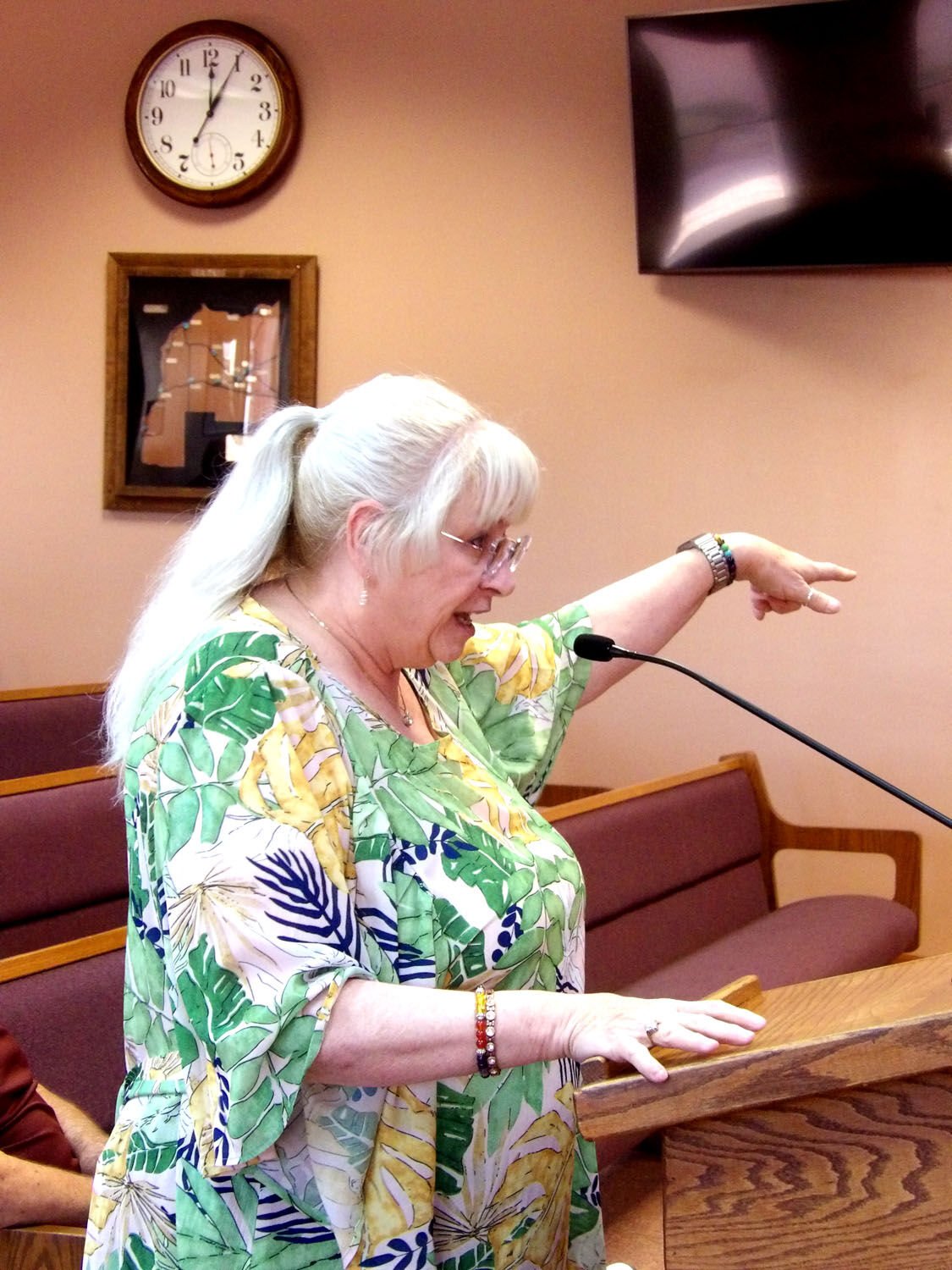 Diane Jones-Zakrajsek spoke out against consolidating the justice courts at the Nov. 15 Board of Supervisors’ meeting. She said the numbers don’t tell the whole story, and the Board needed to check out what happens at the justice courts.

Diane Jones-Zakrajsek spoke out against consolidating the justice courts at the Nov. 15 Board of Supervisors’ meeting. She said the numbers don’t tell the whole story, and the Board needed to check out what happens at the justice courts.

The county’s justice courts were the subject of a discussion at the La Paz County Board of Supervisors’ meeting Nov. 15. The question was whether they should consolidate the county’s three justice courts as a way of saving money for the general fund. Opponents of consolidation spoke of the need for the county to provide and maintain services in outlying areas of the county, and it would greatly inconvenience county residents to have to go to Parker if they needed the courts’ services.

This was a follow-up to the Board’s Sept. 20 meeting, where they instructed the staff to research the matter.

According to information presented by County Administrator Megan Spielman, the justice courts bring in $1.5 million in revenue with general fund expenses of $1.3 million. By consolidating to two courts, the county’s expenses would be $900,000. With one court, those expenses would be $600,000.

The county currently has justice courts in Parker, Quartzsite and Salome. They hear mostly civil and misdemeanor cases. They hear felony cases and decide if they should be bound over to the Superior Court.

Chief Civil Deputy County Attorney Ryan Dooley told the Supervisors at the Sept. 20 meeting other counties had consolidated their justice courts, and there could be a major cost savings for La Paz County.

The justice courts are ranked by judicial productivity credits. The formula for determining these credits is found in state law, ARS 22-125. These credits are used to determine the salaries for justice court judges and employees.

ARS 22-125-H states that no justice court may exceed 1,200 credits in a given year. If that happens, the statute states, “the county board of supervisors shall create sufficient courts, or redraw the justice court precinct boundaries according to section 22-101, in order to reduce the judicial productivity credits for any precinct which exceeds that limit.”

Spielman said the Quartzsite Justice Court currently has 270.93 credits per year, Parker had 178.37, and Salome has 100.30. The total credits of 549.6 is not even half of what the state would require to have more than one court.

Spielman and District 2 Supervisor Duce Minor both said this was a statewide problem. Other counties had consolidated their justice courts.

“I respect all the Justices of the Peace,” he said. “But the county is in bad shape. We need to take steps to correct this.”

Minor also that, if they have it wrong that consolidating the courts is a good idea, he wanted to know where and how they had it wrong.

“We need to have services in outlying areas,” she said. “Dave (District 1 Supervisor Dave Plunkett) and Duce don’t know what it’s like to live in the outlying areas. La Paz County is not all about Parker. We’re taxpayers, too!”

When the public was invited for comments, Diane Jones-Zakrajsek, a long-time court employee, said the numbers Spielman quoted didn’t tell the whole story, and the Supervisors needed to learn more about what the courts actually do.

“You have no idea what goes on in the justice courts,” she said. “Numbers aren’t everything. You don’t know what you’re talking about.”

Jones-Zakrajsek said the justice courts handle important and serious work, like orders of protection. She said they were doing what they could to get the job done with the workload they have.

“People come to us for help,” she said. “Where else are they going to go?”

Jones-Zakrajsek said the numbers don’t reflect how long it takes to complete the paperwork or build a case, and that it takes a long time to train a court clerk. She said she’d like to see a justice court with 1,200 credits and see how many judges and clerks they have.

Jones-Zakrajsek encouraged the Supervisors to check out the justice courts for themselves. She noted they are already self-sustaining, with $1.5 million in revenue as compared with $1.3 million in expenses.

Karen Slaughter, the Salome Justice of the Peace, said the courts were there to help people. She said they have elderly residents who need court services who can’t understand the electronic methods of doing things. She added the Justices of the Peace were on call 7 days a week, and they have to meet schedules set by the state. For example, if a defendant can’t see a judge for his or her initial appearance within a set time frame, the defendant must be released.

Salome resident Gary Zakrajsek acknowledged consolidation will save the county money. He asked the Supervisors to consider how much it would cost residents to travel to and from Parker for court services.

Zakrajsek asked if there were other ways to county could save money or increase revenue, such as selling closed county facilities. He noted the public works yard in Salome has been closed and empty for years.

Zakrajsek said the outlying areas of the county are growing, and the people there expect services. He added that people who live in these areas won’t work for the courts if they have to drive to Parker every day.

If they had to consolidate to one court, Zakrajsek said he would prefer to have Quartzsite remain open rather than Parker because it’s the busiest of the courts. The Quartzsite court has a lot of truck traffic due to citations issued on Interstate 10, and he wouldn’t want all those trucks coming to Parker.

Zakrajsek said he also wanted to see more discussion of this issue, and suggested work session or a town hall meeting.

Minor said no decision has been made yet. He added they were already doing what Zakrajsek wanted by having public discussions on the matter. He added the Supervisors are trying to spend wisely the money they’ve been entrusted with.

“We’re here to make tough decisions,” he said. “It works both ways. You need to walk in our shoes, too.”

Minor said they are going about this in a methodical manner as they don’t want to make a rush to judgement.

“We’re trying to do this right,” he said.

Minor thanked everyone for the lively discussion and the points that were raised. He said they have a lot to consider.

“We have more homework to do,” he said.

It looks like the new variant is going viral.