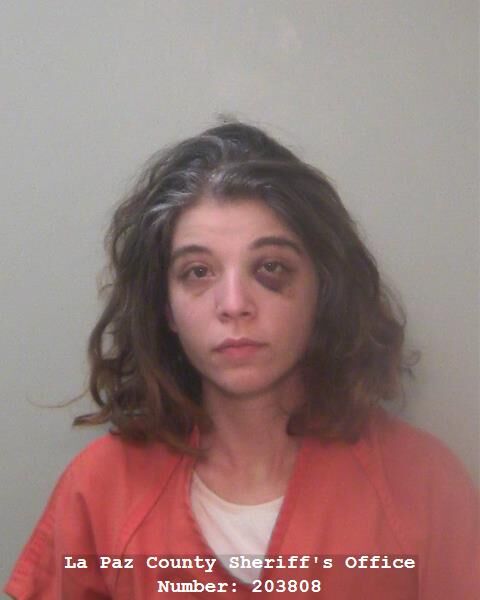 Kayleigh Lewis (above) was arrested for her alleged involvement in several shooting incidents north of Parker on Thanksgiving Day. She is also a suspect in a homicide in Henderson, Nev. She's in custody in the La Paz County Jail. 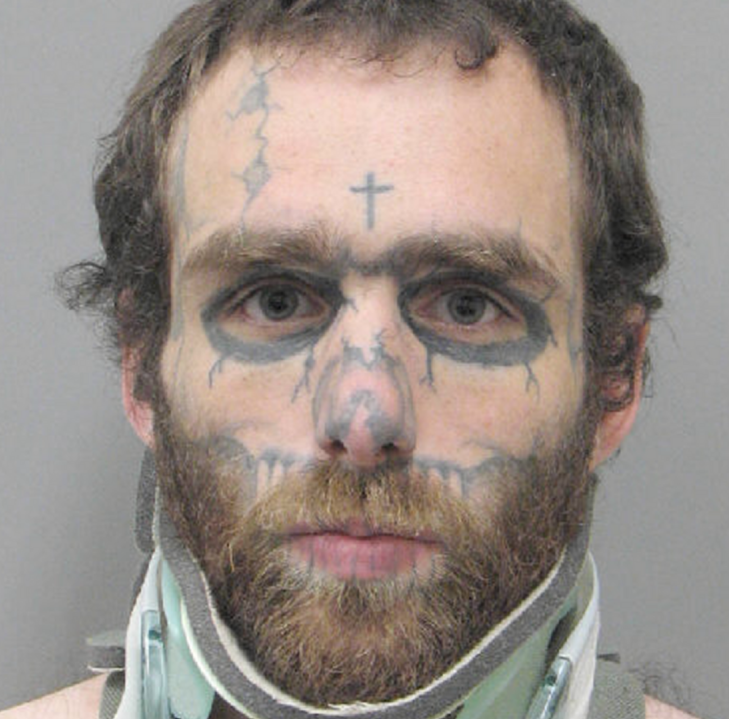 Christopher McDonnell is one of the suspects injured when their car rolled over Nov. 26 on State Route 72 south of Bouse. He is suspected of shooting incidents north of Parker on SR 95 and a homicide in Henderson, Nev. He is also on parole following felony convictions in Texas. 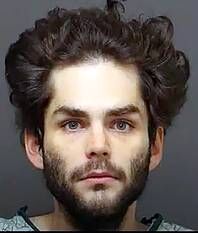 Kayleigh Lewis (above) was arrested for her alleged involvement in several shooting incidents north of Parker on Thanksgiving Day. She is also a suspect in a homicide in Henderson, Nev. She's in custody in the La Paz County Jail.

Christopher McDonnell is one of the suspects injured when their car rolled over Nov. 26 on State Route 72 south of Bouse. He is suspected of shooting incidents north of Parker on SR 95 and a homicide in Henderson, Nev. He is also on parole following felony convictions in Texas.

More information has come out about the suspects in a series of shooting incidents Thanksgiving Day, Nov. 26, on State Route 95 north of Parker. The suspects were arrested by Arizona Department of Public Safety troopers on State Route 72 south of Bouse after they rolled their vehicle. One of the suspects was shot by troopers after he allegedly pointed a gun at them.

The suspects are all residents of Tyler, Texas. Shawn McDonnell, 30, sustained serious but non-lethal gunshot wounds. Christopher McDonnell, 28, suffered injuries in the rollover accident. They remain hospitalized, with Christopher at Sunrise Hospital in Las Vegas.

Las Vegas television station KLAS reported on their website that Christopher McDonnell made his first appearance in Henderson Justice Court Dec. 1 by electronic means. He is facing 20 counts, including murder, attempted murder, and battery with substantial bodily harm. KLAS also reported he is on parole in Texas following a conviction for third degree assault against a family member.

The third suspect, Kayleigh Lewis, 25, was treated and released from La Paz Regional Hospital. She was booked into the La Paz County Jail on charges of manslaughter, aggravated assault and endangerment.

The Associated Press reported Dec. 1 that the McDonnells are brothers, and Lewis is married to Christopher McDonnell.

Michael Schwartzer, a chief deputy Clark County district attorney, said the trio could face the death penalty in Las Vegas stemming from the 11-hour two-state rampage, the Las Vegas Review-Journal reported. They could be charged with hate crimes and terrorism.

In a press release, the DPS said the suspects and their vehicle matched the descriptions of suspects and a vehicle used in several shooting incidents in Henderson, Nev. some hours before the incidents in La Paz County.

In those shootings, 22-year-old Kevin Mendiola was killed. The hate crime charges could stem from the fact Mendiola was black. Four others were injured, including men aged 18, 41 and 53 years old and a 23-year-old woman. Most of the shootings took place at a convenience store in Henderson. Television station KTNV said a police report indicated the suspects were involved in three shooting incidents prior to the incident at the convenience store.

“They traveled from Tyler, Texas, to Las Vegas,” Clark County District Attorney Steve Wolfson told the Las Vegas Review-Journal. “It appears that these were events that were planned before they arrived here in Las Vegas. I believe they were primarily random shootings, but more information will come out in the near future about why they chose to shoot at particular people.”

La Paz County Sheriff’s spokesman Capt. Curt Bagby said the vehicle they used was a car rented in Henderson. KLAS said it was a Toyota Camry.

Bagby said it appeared the suspects went through Lake Havasu City without shooting at anyone or anything. It was not known why they came to Arizona or La Paz County. He added some people may have been shot at without knowing they were shot at. He said people who were driving on SR 95 at the time of the shootings have called the Sheriff’s Office to report bullet holes in their vehicles they hadn’t noticed before.

In their press release, the DPS said a trooper was headed eastbound on SR 72 when he observed a vehicle that matched the description Nevada authorities had sent to the DPS regarding the suspects and vehicle involved in a homicide in Henderson.

As the trooper closed in on the vehicle, it went off the roadway and rolled. It came to rest on its rooftop with the suspects inside. A DPS sergeant arrived on the scene just after the rollover occurred. The two troopers made what the DPS press release called a “high risk stop.” When the troopers ordered the suspects to exit the vehicle, one of the suspects allegedly pointed a gun at them. They fired on and hit the suspect, later identified as Shawn McDonnell.

The DPS said troopers found several handguns at the scene and inside the vehicle.

In the incidents in Nevada, the Review-Journal said Henderson police were called at 12:54 a.m. Nov. 26 to a convenience store in the 800 block of East Lake Mead Parkway. They received several calls at the same time from several individuals alleging they had been shot at.

Henderson Police issued a statement saying the shootings appeared random and there was no apparent motive.

The trooper-involved shooting is being investigated by DPS detectives with assistance from the DPS Mohave County Criminal Targeting Unit. As of Monday, Nov. 30, DPS spokesman Bart Graves said there were no new developments in that investigation.

The La Paz County Sheriff’s Office is investigating the incidents on SR 95.

The suspects in a series of shooting incidents on Nov. 26 north of Parker are believed to ha…

If the idiots rolled their car at mile marker 31 EAST of Bouse, why was SR-71 closed from the 95/71 intersection? Making folks who live in Bouse having to use Plomosa Road. Has ADOT never heard of "local traffic only" As Biden would say :Come on man" that's a heck of a detour when trying to get home...like an additional 25 miles!

It was split week for the Parker Broncs volleyball team. They lost to one 3A West …