PHOENIX -- Members of a congressional panel are going to find out who was communicating with Arizona GOP Chair and Lake Havasu City resident Kelli Ward around the time of the 2020 election and the insurrection attempt that followed. 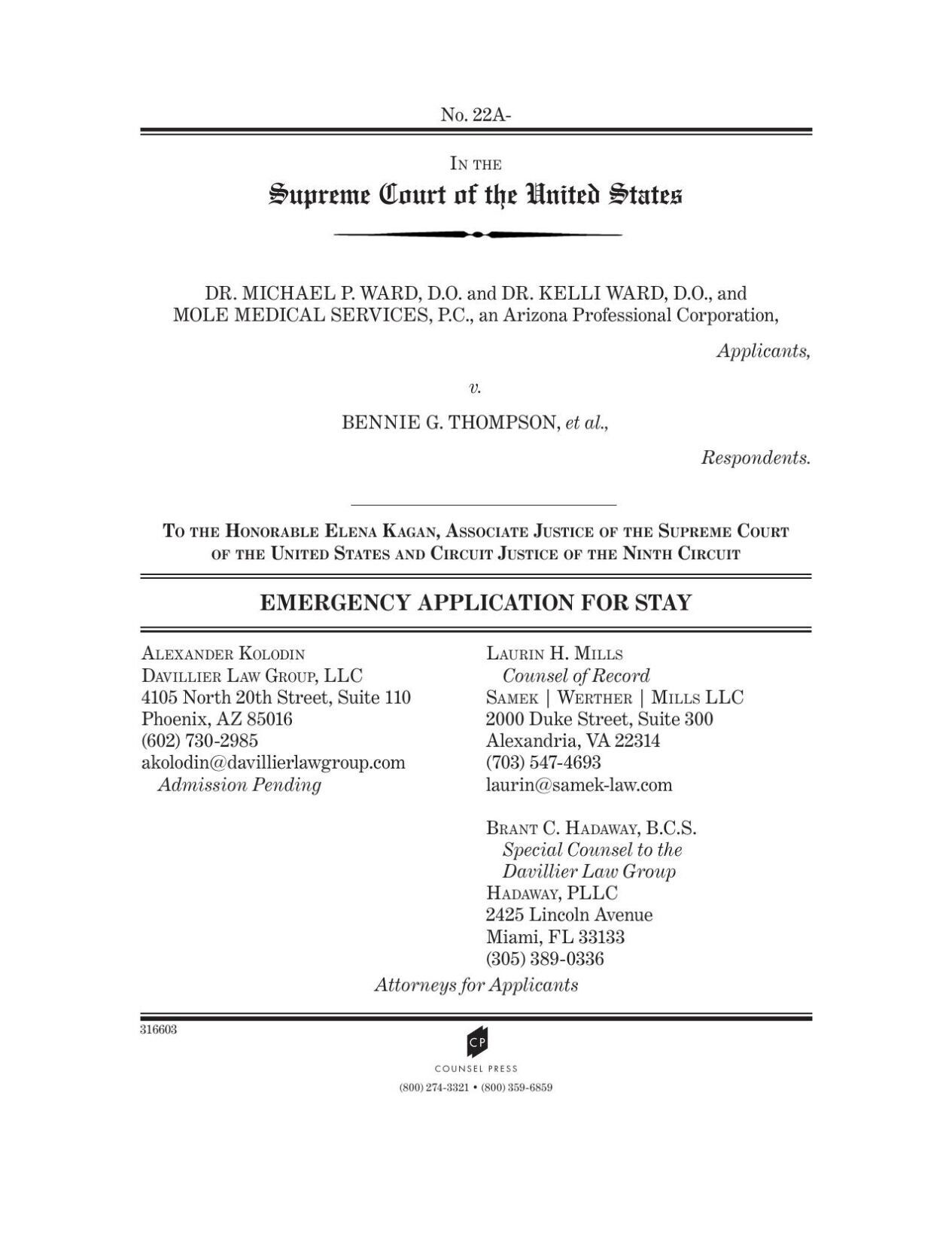 The U.S. Supreme Court on Monday rejected the bid by Ward, who chairs the Arizona Republican Party, to shield the record of her calls and texts from the committee investigating the Jan. 6 riot. The justices gave no reason for their decision.

But Alexander Kolodin, her attorney, said there is something to be said about the fact that Justices Clarence Thomas and Samuel Alito dissented from the order. They said they would have granted her request to delay the order of U.S. District Court Judge Diane Humetewa directing T-Mobile, the company that has the records, to surrender them to Congress and let the full court debate the issue.

"We are heartened by the fact that two Supreme Court justices considered the issue important enough to have wanted to order a stay,'' he told Capitol Media Services. "This sends a message for the next time someone seeks to interfere with the First Amendment right of association.''

That "right of association'' was at the heart of the argument that Kolodin could not get Humetewa, the 9th Circuit Court of Appeals -- and now the Supreme Court to accept.

The special panel studying the causes of the insurrection bid subpoenaed the records of the texts and calls to and from Ward from November 2020 through January 2021. Douglas Letter, legal counsel to the House, said the committee needs to know how Ward's activities played into all that.

That would include with whom she was in contact at the time.  But the materials sought would include only phone numbers, with no content of either the calls or the text messages.

That is similar to records the panel already has from other political actors and the White House as it seeks to draw a picture of who was talking to -- and possibly conspiring with -- whom. And Letter made it clear in his legal filings that Ward was part of some larger effort to overturn the election and prevent Joe Biden from being sworn in.

"Dr. Ward aided a coup attempt,'' he told the justices, participating in "multiple aspects of these attempts to interfere with the electoral count in Jan. 6,''

"She told officials in Maricopa County to stop counting ballots and promoted inaccurate allegations of election interference by Dominion Voting Systems,'' Letter said, and tried to arrange contact between President Trump and a top county official. He also said that Ward, in sending a set of unauthorized electoral votes to Congress -- a list that included her and her husband, Michael -- "mischaracterized (them) as representing the legal votes of Arizona.''

And that's not all.

"While Congress was recessed due to the mob's violence and attack on the Capitol, Dr. Ward continued to advocate for overturning the results of the election,'' Letter said, citing a Jan. 6 Twitter post.

All of that, Letter said, "helped lay the groundwork for the Jan. 6 attack on the Capitol.''

In asking the Supreme Court to stay the subpoena, Kolodin did not get into a discussion of Ward's activities.

Instead, he said courts justices should recognize that forcing disclosure of that information would interfere with the constitutional rights of not just Ward to associate with others but also the rights of those who were in contact with her. And all that, Kolodin said, would "chill'' the interest of members of the Arizona Republican Party in communicating with his client.

"If the subpoena is not quashed, members of the AZGOP will be made to fell that every time they communicate with party leadership, they risk those communications disclosed to law enforcement followed by a knock on the door (or worse) from federal investigators,'' he argued. "A stronger risk of associational chilling can scarcely be imagined.''

Kolodin also argued that because the House panel is controlled by Democrats that it would use the information in the phone records "to harass or persecute political rivals by inquiring into the dealings with the party chair.''

But Humetewa, in refusing to dissolve the subpoena, called those contentions "highly speculative,'' saying that Ward presented no evidence to support their claims. At best, the judge said, those claims "constitute a subjective fear of future reprisal,'' something that federal appellate judges have said is insufficient to show any infringement on associational rights.

Legal issues aside, what also may have been working against Ward is the calendar.

Letter pointed out to the high court that the committee -- and its ability to study the issues behind the Jan. 6 riot and prepare a report -- self-destructs after Jan. 3 when a new Congress is sworn in. Any delay in ordering T-Mobile to turn over the phone records would have undermined the panel's ability to finish on time.

That possibility became more of a reality after it became clear that Republicans would take over control of the House in January. And it is virtually certain that whoever is the new speaker, unlike Democrat Nancy Pelosi, will not want to pursue the matter.

While Monday's Supreme Court order ends the debate about congressional access to Ward's records, there may yet be future litigation.

That could come if the panel turns over its findings to the Department of Justice for a possible criminal investigation. That would raise a separate set of legal questions about whether documents obtained by a congressional panel, even with the blessing of the courts, can then be used in a criminal probe which has its own set of rules about gathering evidence.

PHOENIX — The head of the Arizona Republican Party got at least a temporary reprieve in her bid to stop her phone records from being turned over to Congress.

The battle to release Kelli Ward’s phone records is now at the Supreme Court.

County Attorney’s office: Plunkett did not have a conflict of interest in Bouse rezoning.

Kelly, Fontes and Yee declared winners of their races; others too close to call