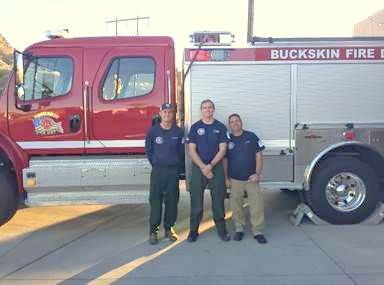 The Buckskin Fire Department has sent two crews to fight the wildfires raging in Southern California. On Dec. 6, the BFD sent two units (a Type 3 and a Type 6 fire engine) and seven Firefighters a staging area in Chino, Calif. This morning both crews were deployed to The Thomas Fire in Ventura, Calif. Crew deployments can be as long as twenty-eight days. Photo 1: The Type 3 engine is led by Engine Boss Mike Byrd (right) with Firefighters Cody Smith, Brandon Warrick and Chris Frost (not pictured). Photo 2: The Type 6 engine is led by Engine Boss Jason Weatherford (center) with Engine Boss Trainee Tyler Kowalski (Left) and Firefighter Steven Hollimon.

Don't you just love it when liars call each other liars? If everyone in government…

To the Editor: Thank you from the family of Donna Mae McCormick