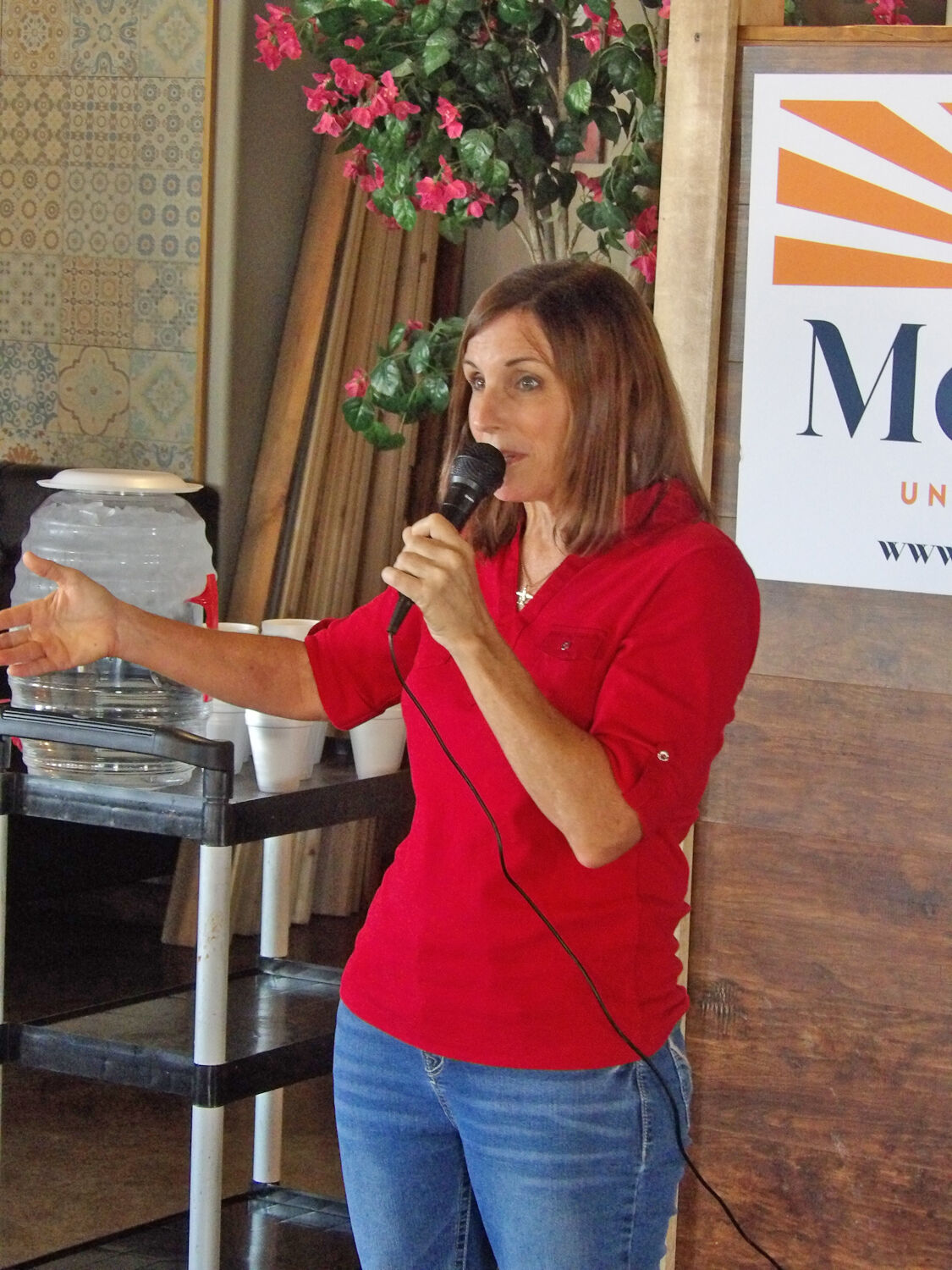 U.S. Sen. Martha McSally made a campaign stop Sept. 18 in Parker. She told the audience the election this year is a choice between freedom and socialism. 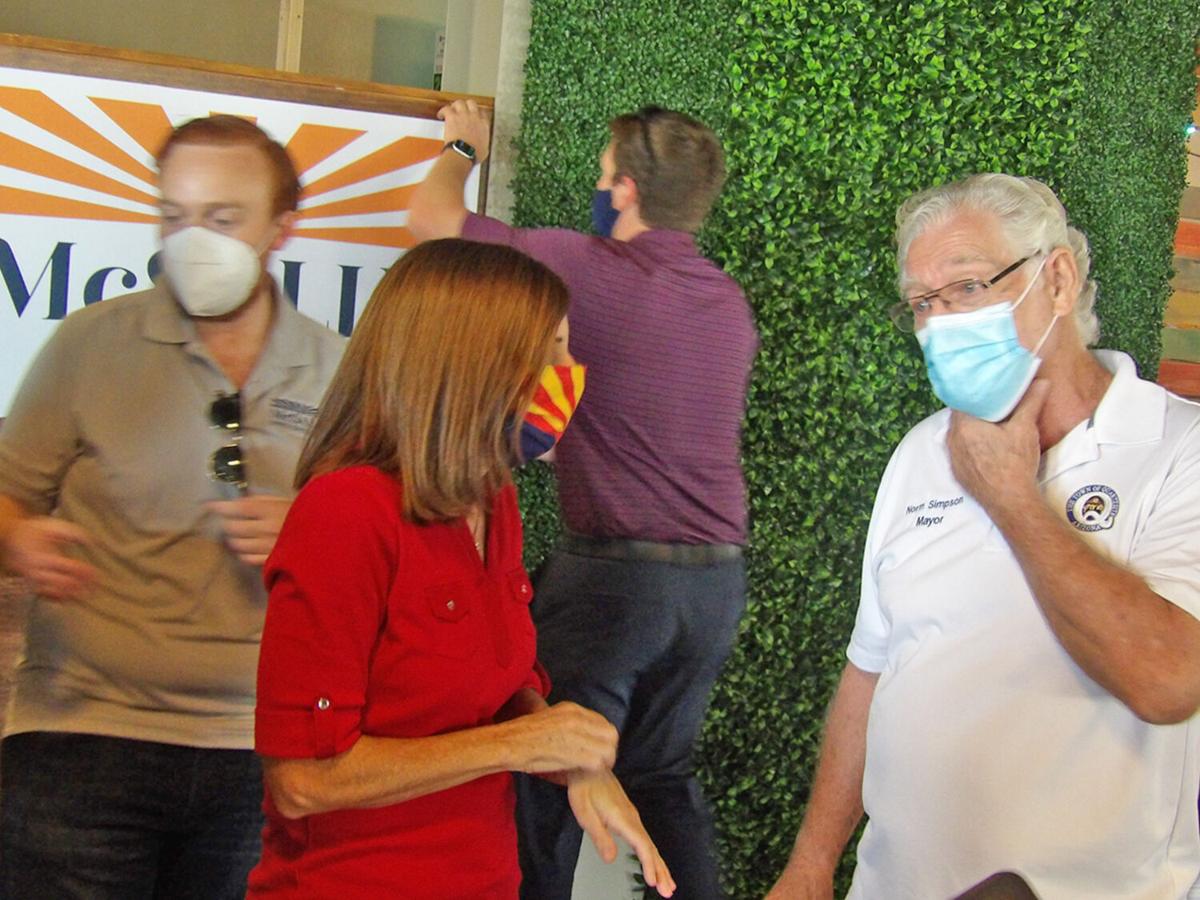 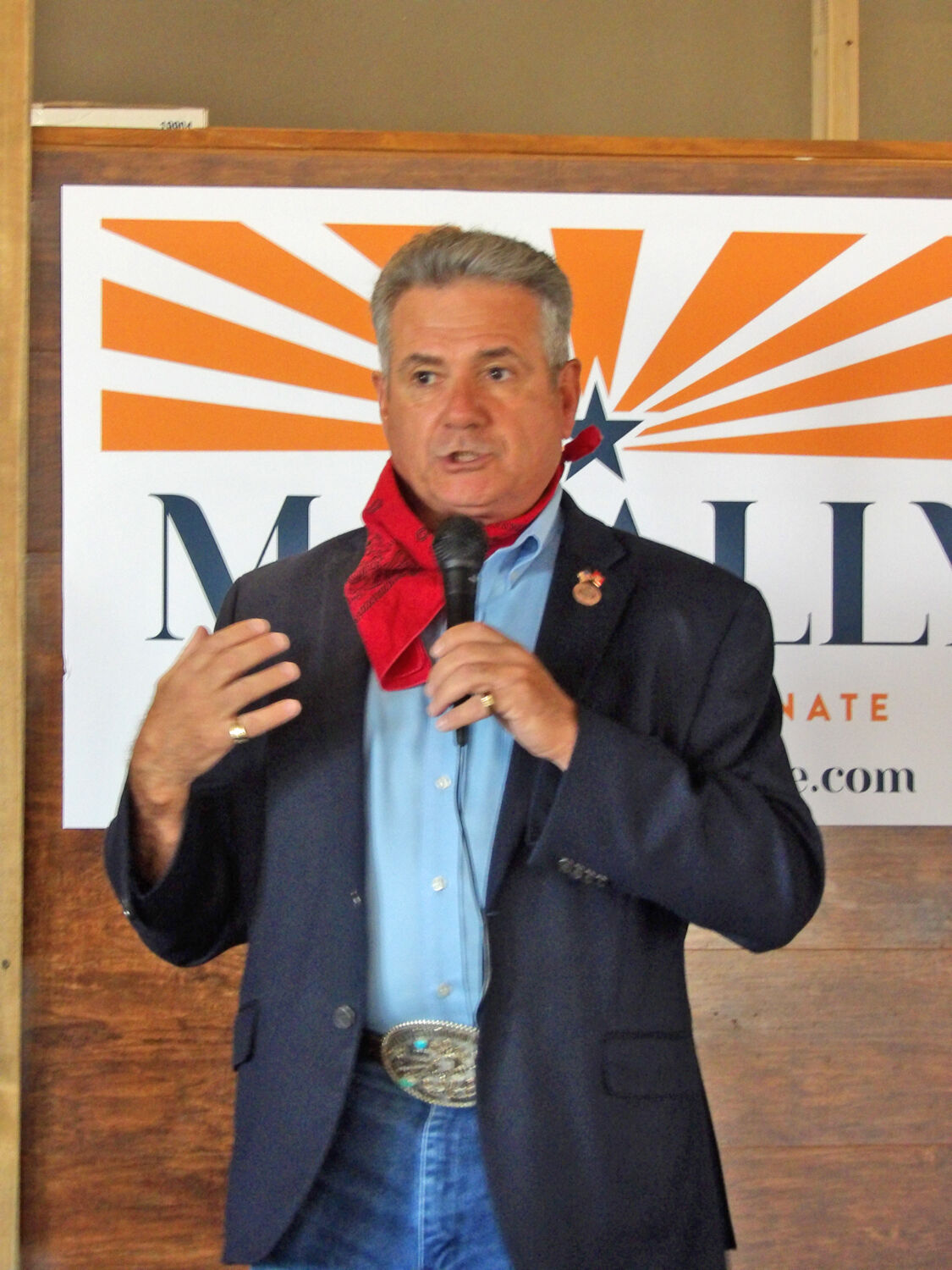 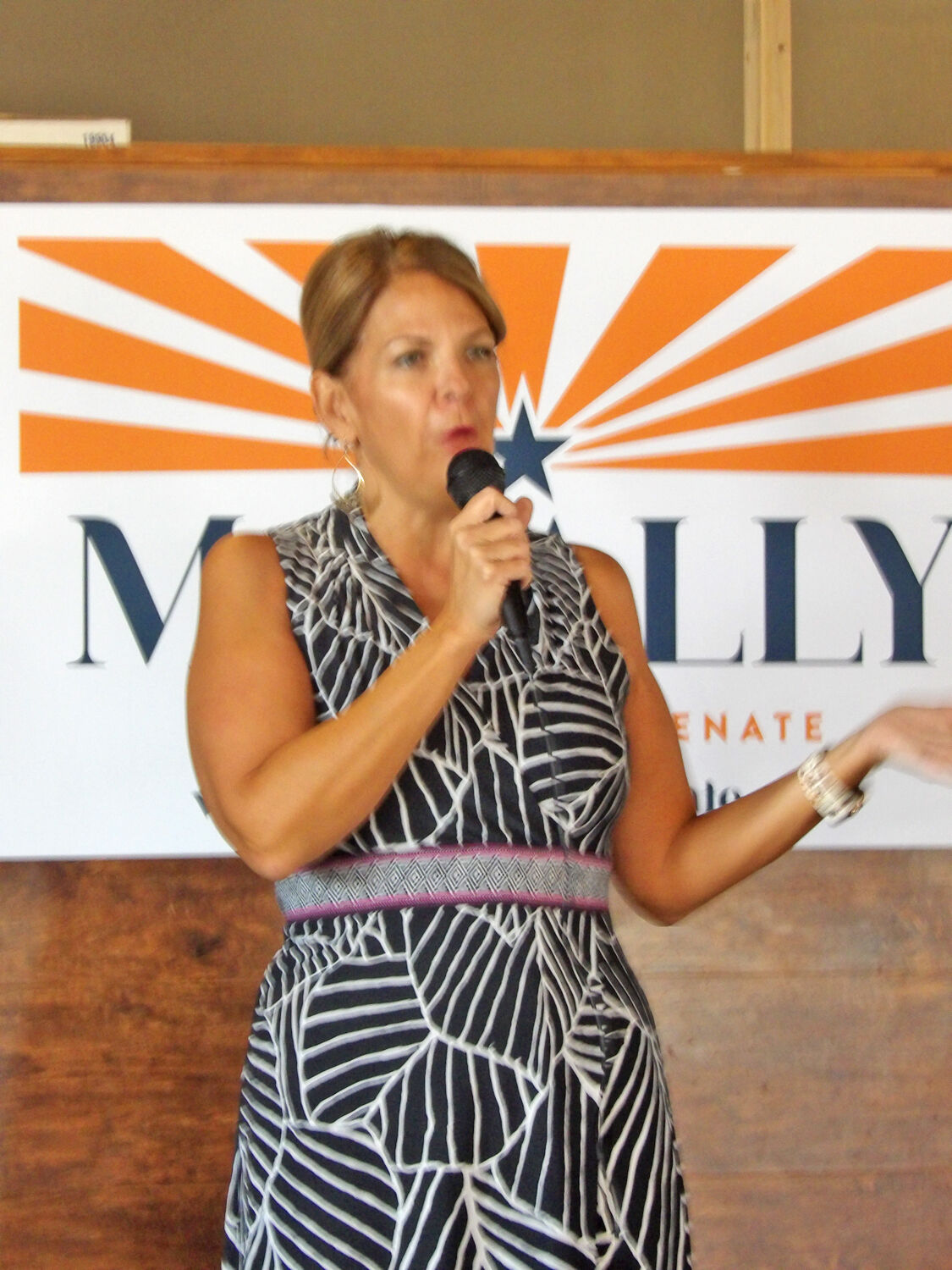 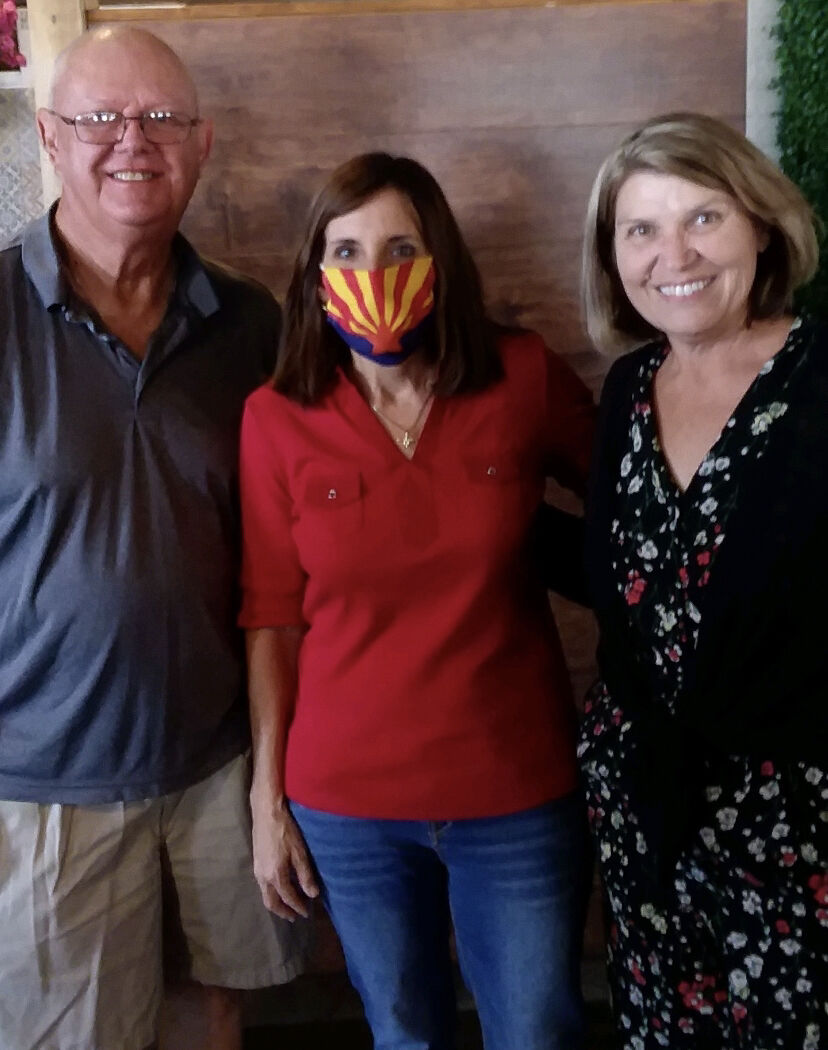 U.S. Sen. Martha McSally made a campaign stop Sept. 18 in Parker. She told the audience the election this year is a choice between freedom and socialism.

Arizona U.S. Senator Martha McSally made a campaign stop Sept. 19 in Parker. McSally, a Republican, is seeking election to a term or her own after being named by Gov. Doug Ducey to fill the seat previously held by the late Sen. John McCain.

McSally said what’s at stake in this election is whether the nation will live in freedom with a strong economy, a strong military and border security or live under left-wing socialism. She criticized the ties of the Democrats to China. She also said the U.S. Senate needed to confirm whoever President Donald Trump nominates to the U.S. Supreme Court to fill the seat left vacant by the death of Justice Ruth Bader Ginsburg.

She said her thoughts and prayers are with Ginsburg’s family at this time. Ginsburg, 87, died Friday, Sept. 18.

Speaking at El Sarape Restaurant, McSally began by reminding the audience of local officials about the achievements of the Republican Party under President Trump and the GOP majority in the U.S. Senate. She especially spoke of how they were transforming the federal judiciary. She said more conservative judges have been named to the federal courts, including the Ninth District Court of Appeals, which has been considered one of the most liberal courts in the nation.

As for the Supreme Court, she said it has been traditionally the duty of the Senate to confirm the President’s nominees. She added that, if this becomes a contested election, it would not be good to have just eight justices on the court as this could lead to tie votes.

McSally described the difference between how Democrats and Republicans see the courts.

McSally said President Trump had rebuilt the U.S. military, and had improved care for veterans. She said that, under “Obama-Biden,” the armed forces would be “gutted” to fund their socialist agenda.

The greatest accomplishment of the Trump Administration, McSally said, was how the economy grew before the onset of the coronavirus pandemic. She said this was because the Administration cut taxes and eliminated many regulations, allowing the economy to grow.

“We were hitting record lows for unemployment,” she said. “Wages were growing.”

McSally said the nation was ready for the Great American Comeback once the coronavirus was beaten. She said the economy would be even stronger because the Republicans will keep taxes low and they will bring jobs back from China.

The pandemic has made many Americans aware of how dependent our nation is on China, she said. She added that China is an adversary on the world stage.

“People are asking why are we dependent on China for things like personal protective equipment and pharmaceuticals,” she said. “It’s because people like Joe Biden (the Democratic candidate for President) outsourced jobs to China.”

McSally, a former U.S. Air Force fighter pilot, said she has been involved in national security her entire professional life. She recognizes China as a threat. Biden, on the other hand, is invested in China.

On a local matter, McSally told the audience she led efforts in the U.S. Senate to convey land in La Paz County held by the Bureau of Land Management for solar power development. She said it shouldn’t literally take an act of Congress to convey federal land to local entities.

McSally also rejected calls to defund police departments. She said that, in the military, if you have people who break the law, those people are court-martialed and/or discharged. She said the same thing should apply to law enforcement. Police officers shouldn’t be judged by the bad actions of a few.

“We need to hold law enforcement accountable,” she said. “But we still need to back the blue.”

McSally also made some comments about her election opponent, Democrat Mark Kelly. She described him as being a favorite of the Senate Minority Leader, Charles Schumer, D-N.Y.

“A vote for my opponent is a vote for a leftist agenda,” she said. “They won’t tell you this, but they are campaigning for the biggest tax increase in U.S. history.”

McSally said it was vital for the nation to keep the Republican majority in the Senate.

“We are the firewall in the Senate against Nancy Pelosi (U.S. House Speaker),” she said. “They will have to pry the Senate majority out of my cold, dead hands.”

McSally said Arizona is full of freedom-loving patriots, and said this state will be crucial to the election.

She urged everyone in the audience to get involved in the Republican campaign.

“I’m giving it all I got, but I need your help,” she said. “Talk to your friends, neighbors and co-workers and let them know what this election is all about.”

McSally closed her remarks by leading the audience in singing “God Bless America.”

McSally was introduced to the audience by State Dist. 5 Sen. Sonny Borrelli, who described her as a strong ally for protecting the border, for representing Arizona and advocating for veterans’ issues.

“On her watch, your guns will never be taken away,” Ward said.

Ward said the GOP was putting together a voter protection system that would insure the Democrats won’t try to steal the election.

As a long term partner with La Paz County generating tens of millions of dollars for the landfill plus free disposal and recycling services across the county, plus my five years of work paid for at my own expense to bring almost a billion dollar host package to the residents of La Paz County, I thank Senator McSally for her bipartisan effort to work with Congressman Paul Gosar and Senator Sinema to get more land conveyed to the local jurisdiction so that residents will get the benefits of direct lease fees versus Payment in Liew of Taxes from the BLM. Thanks for your service and commitment to rural economic development!

Volleyball Broncs at home this week.

The Broncs volleyball team got another sweep at they traveled to Tonopah Oct. 8 to…