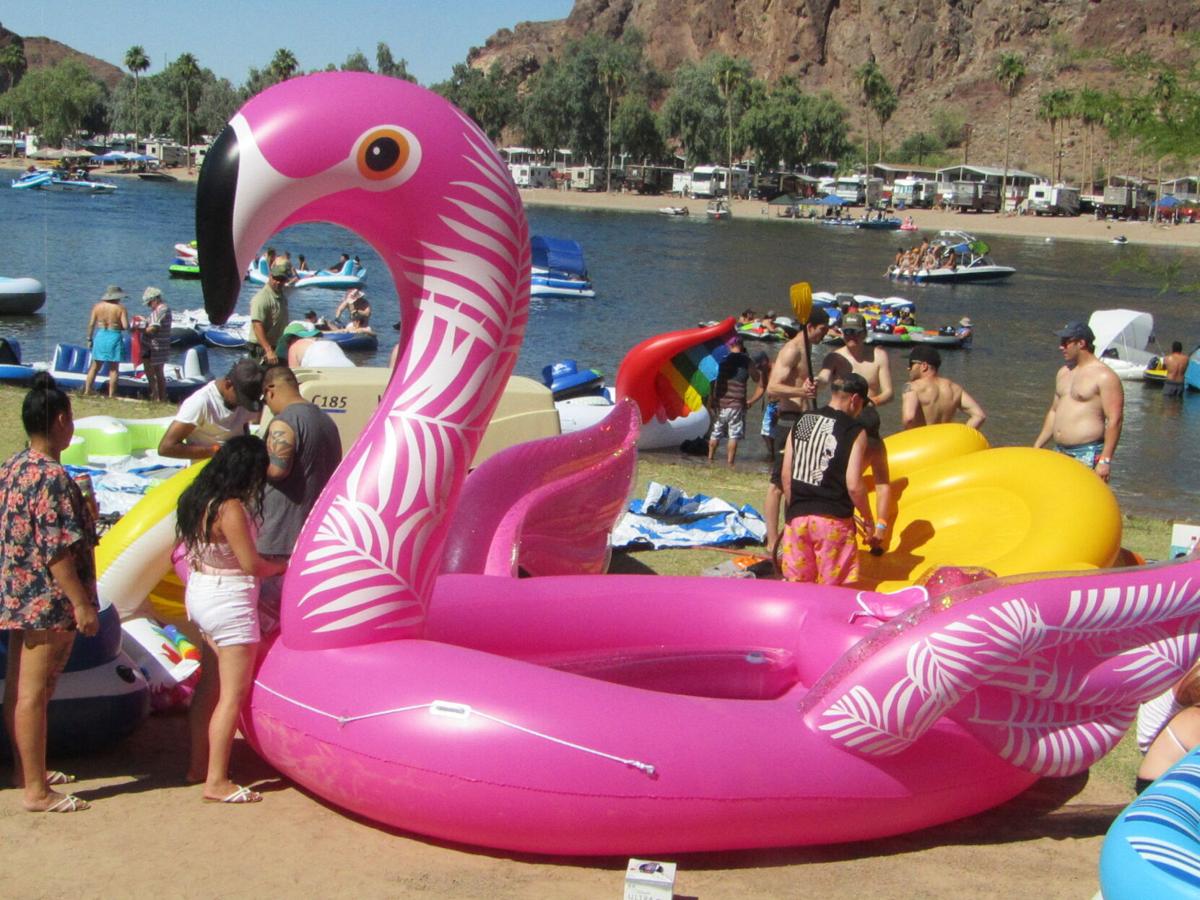 After being canceled in 2020 due to the coronavirus pandemic, the Parker Tube Float is back for 2021. Fanciful floats, like this one at the 2019 Tube Float, will be making their way down the Colorado River June 12. 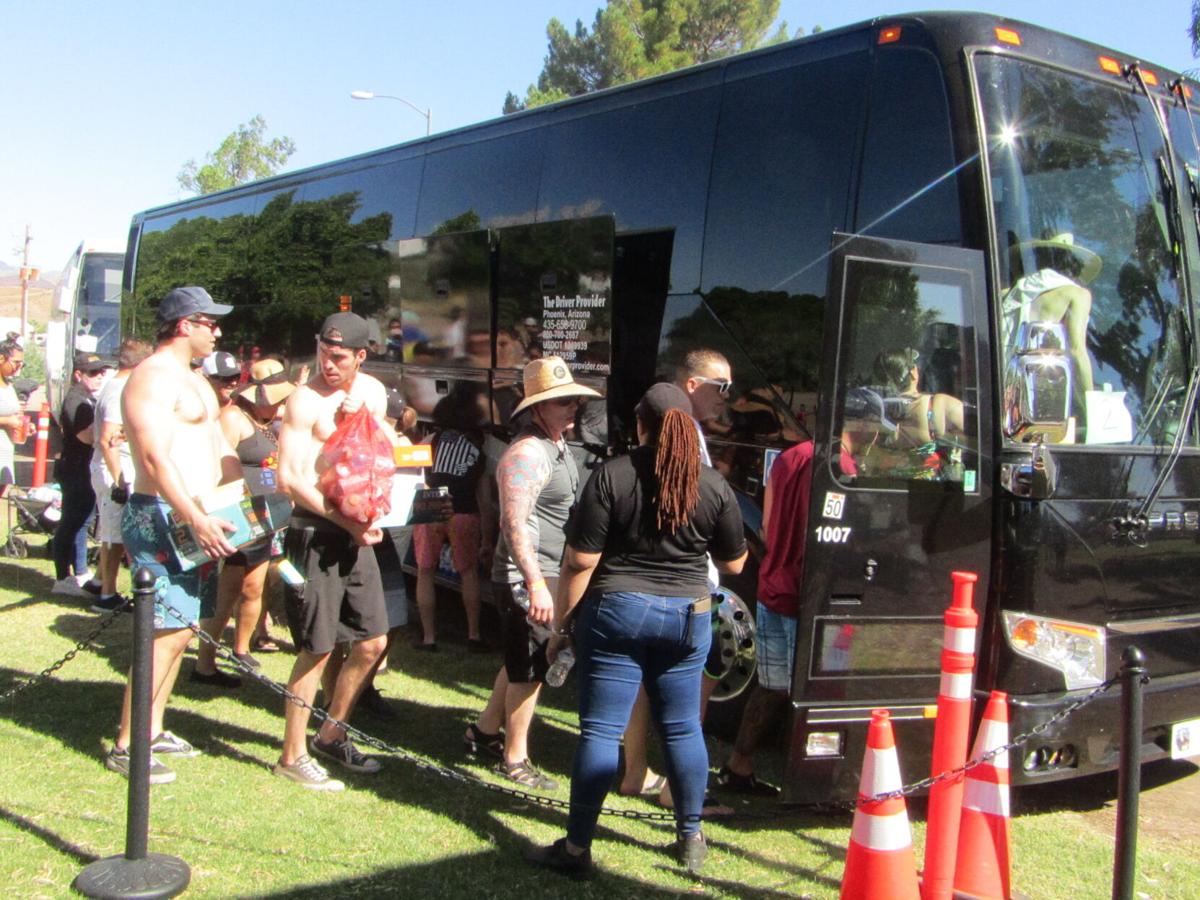 As in year’s past, Blasian Executive Secured Transport will be providing shuttle busses from La Paz County Park to the starting line at Buckskin Mountain State Park. Here, one of Blasian’s busses picks up float participants at the 2019 Tube Float.

After being canceled in 2020 due to the coronavirus pandemic, the Parker Tube Float is back for 2021. Fanciful floats, like this one at the 2019 Tube Float, will be making their way down the Colorado River June 12.

As in year’s past, Blasian Executive Secured Transport will be providing shuttle busses from La Paz County Park to the starting line at Buckskin Mountain State Park. Here, one of Blasian’s busses picks up float participants at the 2019 Tube Float.

After an absence of one year, the biggest event of the summer months in Parker is back for 2021. The 43rd Parker Tube Float will be held Saturday, June 12.

The Float always sees hundreds of colorful and fanciful floats making their way down the Colorado River. The weekend of the Tube Float is considered one of the four big weekend of summer in the Parker area, along with Memorial Day, the Fourth of July and Labor Day. This year’s theme is “This Float’s for You.”

Floaters will set off from 8 a.m. to 12 noon, with the float itself ending at 4 p.m. As has been done in recent years, floaters will arrive and park at La Paz County Park and be bussed to the Tube Float starting line at Buckskin Mountain State Park. The float will head down the Colorado River to the finish line and an after-float party at Pirate’s Den Resort in La Paz County Park.

A no-wake zone will be enforced from 8 a.m. to 4 p.m. on June 12 between Buckskin Mountain State Park and Pirate’s Den.

The event is organized by the Parker Regional Chamber of Commerce & Tourism. They ask that participants not inflate their floats until they get to Buckskin Mountain State Park. Compressors will be available at the starting line to inflate their floats.

Bus service will be provided by Blasian Executive Secured Transport. This Phoenix-based firm has been the official provider of shuttle bus services for the Tube Float since 2018. On their website, they say they handle anything from limousine service to large groups. They have been praised by Tube Float participants and have received positive reviews on the Yelp website.

“They do us right every time,” the chamber’s Danny Tucker said of Blasian.

Registration is currently underway at www.parkerfun.com. Following June 6, the fee is $40 per person. There will be on-site registration at La Paz County Park the day of the event. Each participant will receive a wristband. No one will be allowed to board the shuttle busses without a wristband.

The fee for parking at La Paz County Park is $10 per vehicle and is not included in the registration fee.

Tucker said he did not have the exact number of people who had registered for the float as of June 4. He said they were “right on target” from where they have been in the past.

Trash bags will be provided. Anyone caught dumping trash into the Colorado River will be subject to being removed from the float and possibly cited or arrested.

Volunteers are also needed for this event. To register online, or to sign up to be a volunteer, go to www.parkerfun.com.

This event is a fundraiser for the Parker Regional Chamber of Commerce & Tourism and allows them to provide services to local businesses.

This will be the fifth time the Tube Float has gone from Buckskin Mountain State Park to Pirate’s Den. Prior to 2017, it went from La Paz County Park to the BlueWater Resort & Casino. A new route was sought because of the time floaters spent in the hot sun and complaints from on-river residents about trespassers, litter and trash, and unruly participants.

The 2020 Parker Tube Float was cancelled. The event, which had already been moved from its traditional date in early to mid-June to Aug. 1, was cancelled June 29 following Gov. Doug Ducey’s executive orders regarding the coronavirus pandemic.

The Executive Order, No. 2020-43, specifically called for tubing operations and centers to be closed until July 27. While the date of the Tube Float was after the order's expiration date, it was possible the order could’ve be extended if there was no decrease in the number of new coronavirus cases.

Since that time, the number of new coronavirus cases in the state has declined. Many of the restrictions have been eased up or have been lifted completely. As of June 5, Arizona had seen 883,000 cases, of which 14,900 were active. There had been 17,698 deaths and 850,000 Arizonans had recovered.

Another Parker Tube Float is in the books. From the looks of things, it all went a…

Pits to the Town Council for not doing something about helping the Senior Center. …