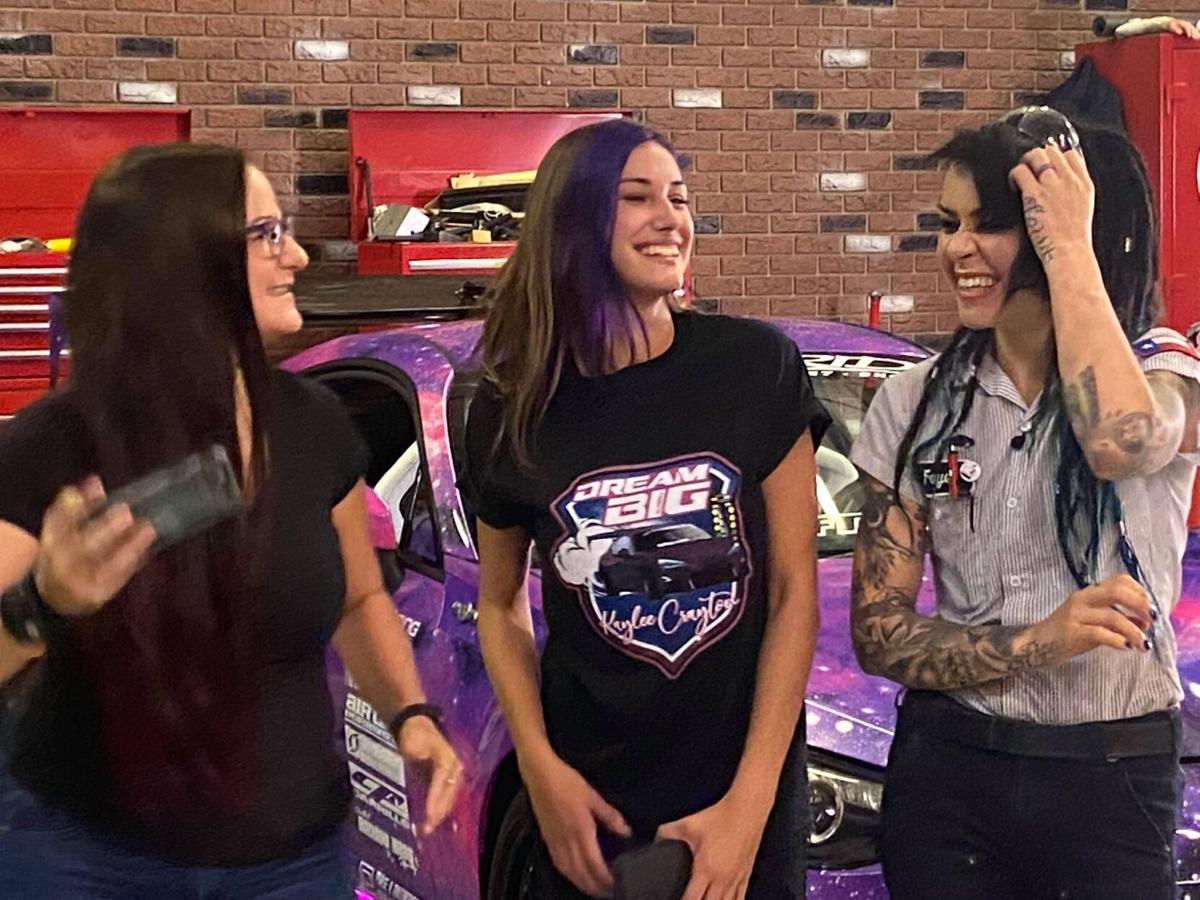 Parker drag racer Kaylee Crayton (center) is seen with two of the cast members of “All Girls Garage,” a syndicated racing show. Crayton taped the episode in August. It will air locally at 8:30 a.m. on Channel 89 on Suddenlink. 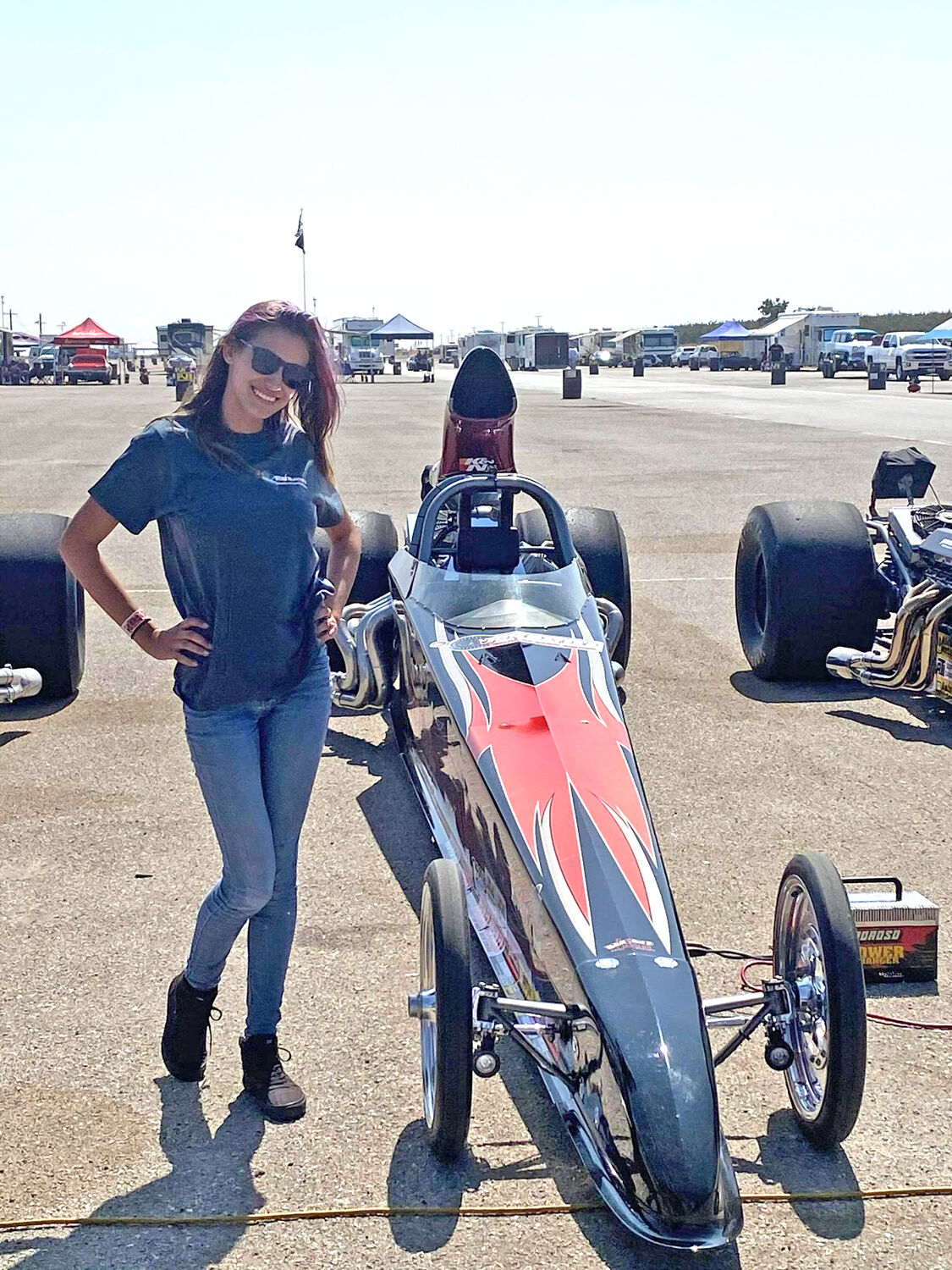 Kaylee Crayton is seen with the drag racer she drove at the Tom Bayer School of Drag Racing. She earned her NHRA drag racing license Sept. 19.

Parker drag racer Kaylee Crayton (center) is seen with two of the cast members of “All Girls Garage,” a syndicated racing show. Crayton taped the episode in August. It will air locally at 8:30 a.m. on Channel 89 on Suddenlink.

Kaylee Crayton is seen with the drag racer she drove at the Tom Bayer School of Drag Racing. She earned her NHRA drag racing license Sept. 19.

A young Parker woman continues to make a name for herself in the world of motorsports. Kaylee Crayton recently got her drag racing import, the Nebula 86, back on the track. She also earned a National Hot Rod Association drag racing license. Finally, she made an appearance on a syndicated television show that will be airing this weekend.

Crayton will be appearing on “All Girls Garage” at 8:30 a.m. on Oct. 3. It will air locally on Channel 89 on Suddenlink cable TV and Channel 247 on Dish TV. Direct TV will have the call letters MTHD.

Crayton is becoming known on the southwest import drag racing circuit with her car, the Nebula 86. In November 2019, she met with the cast members of “All Girls Garage.” One of the show’s cast members, Faye Hadley, recommended to the producers she be invited to appear on the show with her car.

It almost didn’t happen, according to Crayton’s father, Danny. He said the Nebula 86’s motor blew up in March 2020. A local high-performance shop, MNR Racing, was able to rebuild it. Danny said it now has a supercharger and puts out 650 hp.

Danny is also a drag racer, and he and Kaylee started racing together. He’s also one of the coaches for Mixxed Bloodz MMA in Parker.

Kaylee Crayton had her car shipped to Florida and had her appearance on “All Girls Garage” taped on Aug. 10 and 12.

The Nebula 86 returned to the track Sept. 12 for Drift and Drag in Chandler, Ariz. Danny said she did very well.

“She was significantly faster than she was before,” he said.

In addition to these accomplishments, Crayton earned her NHRA drag racing license from the Tom Bayer School of Drag Racing. She made eight runs on the track, with her best run being 8.97 seconds at 147 mph.

Danny said Kaylee will be taking more courses to expand her driving portfolio. He added she’s hoping for more opportunities in the future.

Her next event will be the Tucson Import Face-Off on Oct. 25.

Danny Crayton said he and Kaylee wanted to thank all their sponsors, and thank the community for their support. He said he dreamed things would reach this point.

“I never imagined this would happen to us,” he said. “We just went out and went racing together. We’re very blessed to be where we’re at. It’s very awesome to be a part of this."

As for any advice he and Kaylee could give to young people in the community, Danny said, “Keep dreaming big.”

From the Dugout: Another baseball legend gone

This is becoming a bad year for baseball legends. The latest legend we had to say …