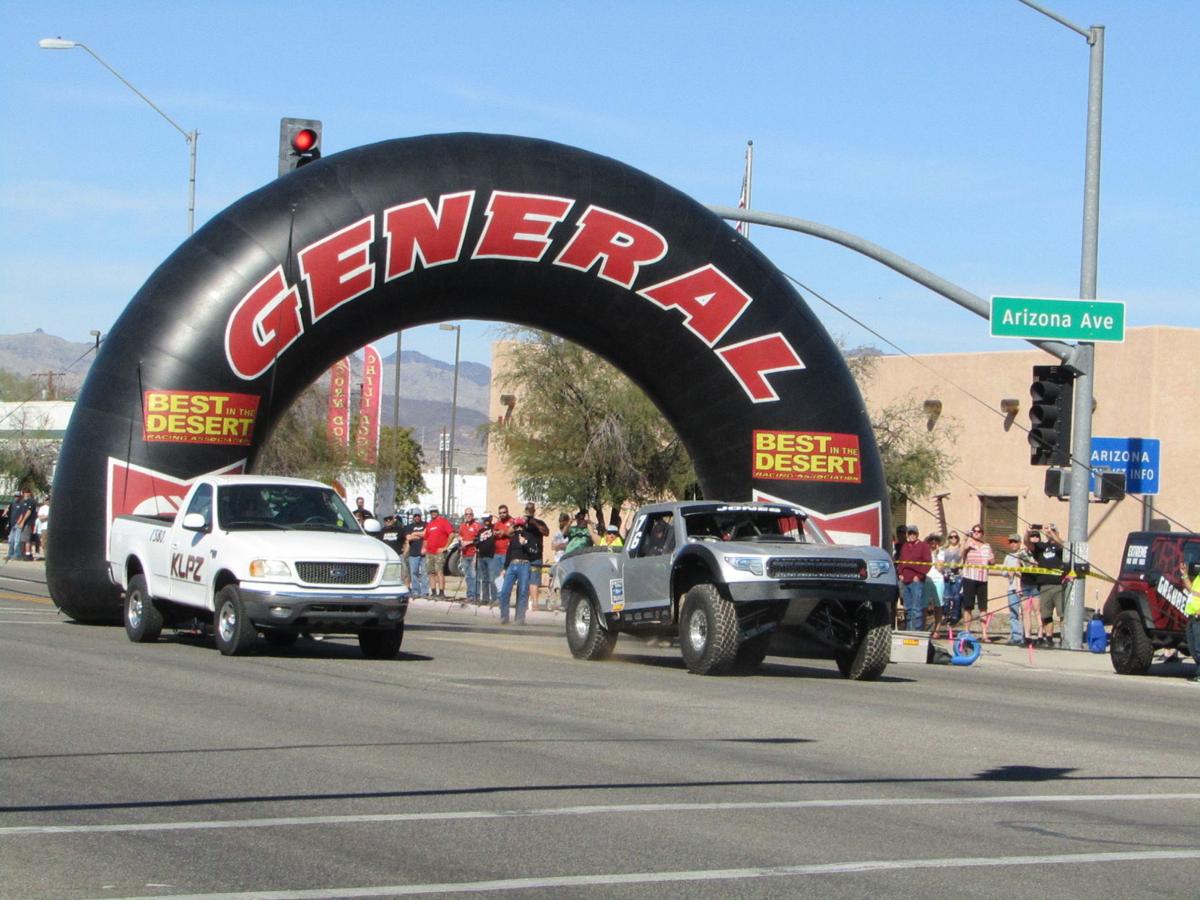 The 2020 Parker 425 will be held this weekend with two starts, one on Friday, Jan. 24 and the second on Saturday, Jan. 25. Both starts will be on California Avenue in downtown Parker. 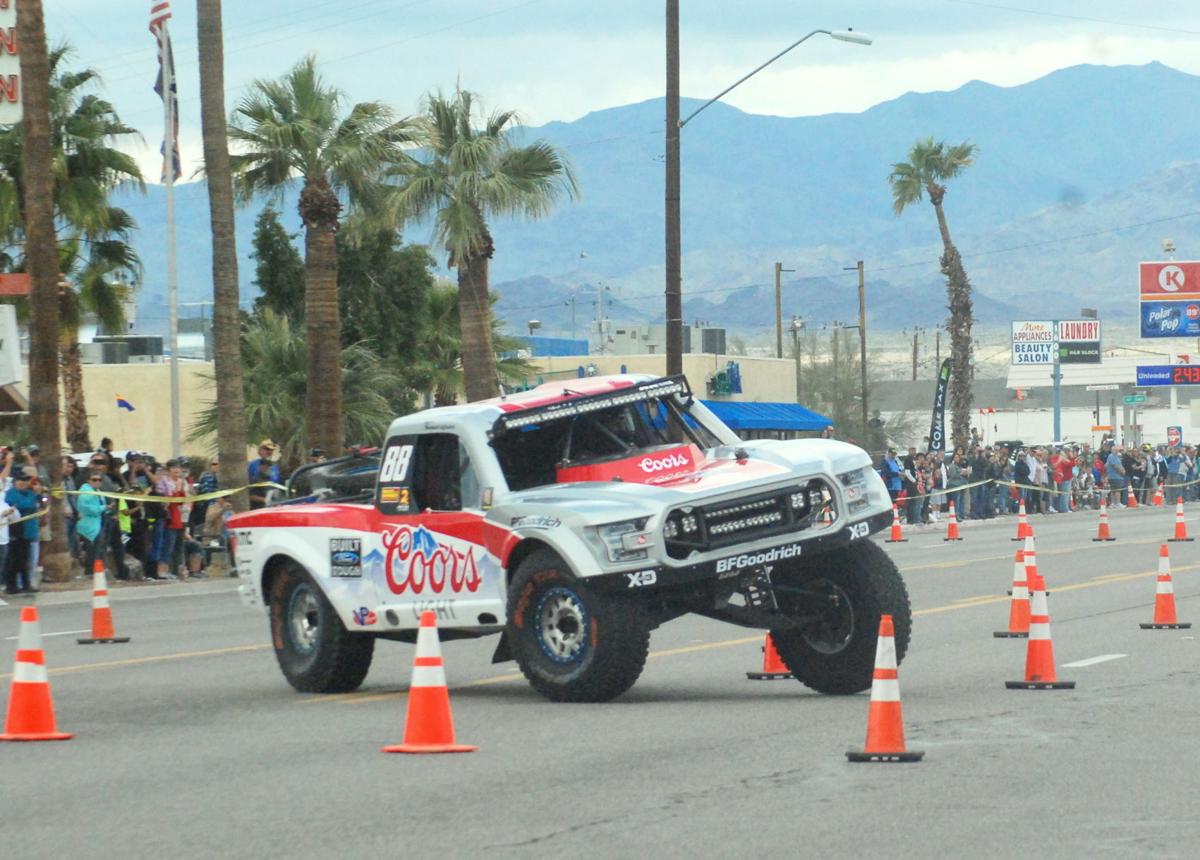 Brett Sourapas of Rancho Santa Fe, Calif. drives No. 88, a Ford, through the turn onto 18th Street from California Avenue in the 2019 race. Driving a Trick Truck, he was the overall winner in the second start and the best in the three-lap classes. His co-driver was his father, Steve Sourapas. Their time on the course was 6:45:57.991.

The 2020 Parker 425 will be held this weekend with two starts, one on Friday, Jan. 24 and the second on Saturday, Jan. 25. Both starts will be on California Avenue in downtown Parker.

Brett Sourapas of Rancho Santa Fe, Calif. drives No. 88, a Ford, through the turn onto 18th Street from California Avenue in the 2019 race. Driving a Trick Truck, he was the overall winner in the second start and the best in the three-lap classes. His co-driver was his father, Steve Sourapas. Their time on the course was 6:45:57.991.

The sights, sounds and thrills of off-road racing will fill the Parker area this weekend, Jan. 24 and 25, for the running of the BlueWater Resort & Casino/Best in the Desert Parker 425 presented by Jimco. This event is one of the largest, oldest and most prestigious off-road racing events in the nation.

The history of off-road racing in Parker goes back almost 50 years, to the very beginnings of the sport. It’s gone by different names and had different promoters and sanctioning bodies, but it has always attracted some of the top names in the sport. Since 2003, it’s been organized and promoted by Best in the Desert Racing Association of Las Vegas, Nev.

The race is seeing some major format changes this year. First, it’s being held earlier than it had in the past. Previously, it was held the first weekend in February. Donald Jackson, Operations Director for Best in the Desert, said they wanted to avoid conflicts with Super Bowl Sunday. They also wanted to prevent a scheduling conflict for many of their vendors.

A second format change was to have the race over two days. The first race will be Friday, Jan. 24 for the slower and two-lap classes. The second race will be on Saturday, Jan. 25 for the faster classes, including the very fast Trick Trucks. In recent years, there had been two starts on Saturday, one in the morning and one in the afternoon.

Jackson explained this format change was done for safety reasons. It would minimize the time racers have to spend driving in the dark. With the two start format on one day, there were still slower vehicles out on the course when the faster ones began their race.

Both races will start at 7:15 a.m. on California Avenue in downtown Parker in front of the Parker Regional Chamber of Commerce Building at Arizona Avenue.

Due to the two-day schedule, other events surrounding the race have had to be rescheduled. The Downtown Experience will start at 12 noon Wednesday, Jan. 22 in downtown Parker. Previously, it had been held the Thursday before the race.

This street fair and “show and shine” has grown each year since it was introduced in 2010. It’s now one of the main events of the race weekend. Racers and their vehicles will be headed downtown following the time trials Thursday morning. The Downtown Experience will allow fans to meet with racers and get a good look at their machines. There will also be vendors, live music, and lots of activities.

Vendors last year included everything from food to race gear to artwork, clothing and all kinds of merchandise. One of the local churches was even giving away free Bibles and bottles of water.

There will be temporary street closures for the Downtown Experience and the starts on both days. Those closings are listed in a story in this week’s Pioneer.

One event that will not be held this year is the Parker Youth Off-Road Experience, which was sponsored by the Parker Area Alliance for Community Empowerment and had been held the Wednesday before the race. The event was billed as more “kid friendly” than some others, and gave young people a chance to meet the racers.  PAACE Director Randy Hartless said they weren’t sure if they could get anyone to come on the Tuesday before the race, so the event was canceled. He said PAACE will have a booth at the Downtown Experience with fun activities for young people.

Contingency, technical inspection and vehicle registration have also been moved up a day due to the new two-day race format. Instead of being held the Friday before the race they’ll be held Thursday, Jan. 23. Contingency and technical inspection will be held in the north parking lot of one of the sponsors for this event, the BlueWater Resort & Casino. There will also be many vendors selling everything from t-shirts to tools, from accessories to racing helmets, and from race gear to radios. It’s another chance to get up close to the race cars. However, race fans should bear in mind the racers and crews have business to tend to.

The After-Race Party will be held at Saturday, Jan. 25 8 p.m. in the BlueWater’s Dig Lounge.

The event will conclude with an awards ceremony at 9 a.m. Sunday, Jan. 26 in the BlueWater’s Mohave and Hopi Rooms.

For more information, check out the Parker Pioneer’s Parker 425 guide, as well as related stories in this week’s edition. You can also call the Parker Regional Chamber of Commerce & Tourism at 928-669-2174 or go online to Best in the Desert’s website at www.bitd.com.

All times are Arizona time

The first unsanctioned off-road race in Parker was run by Joe E. Bush in 1910.