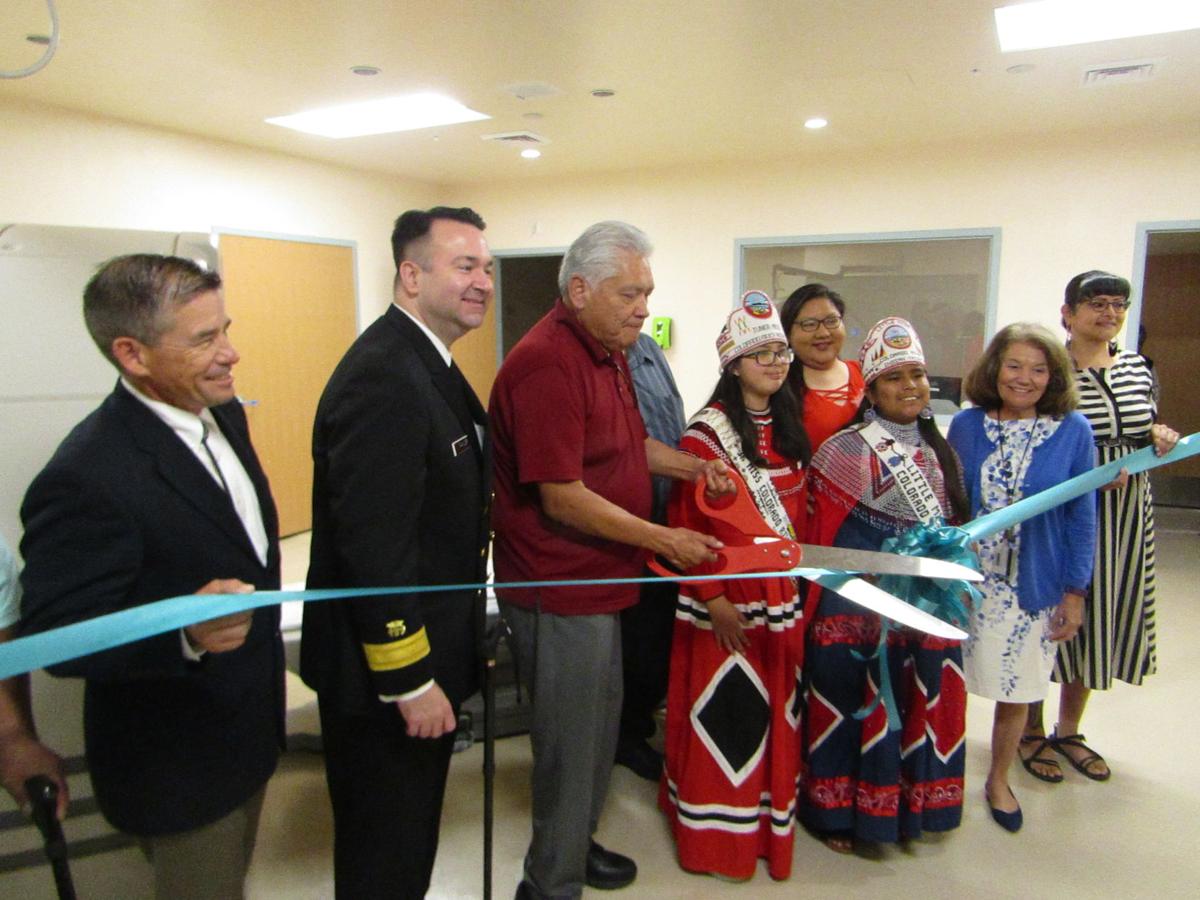 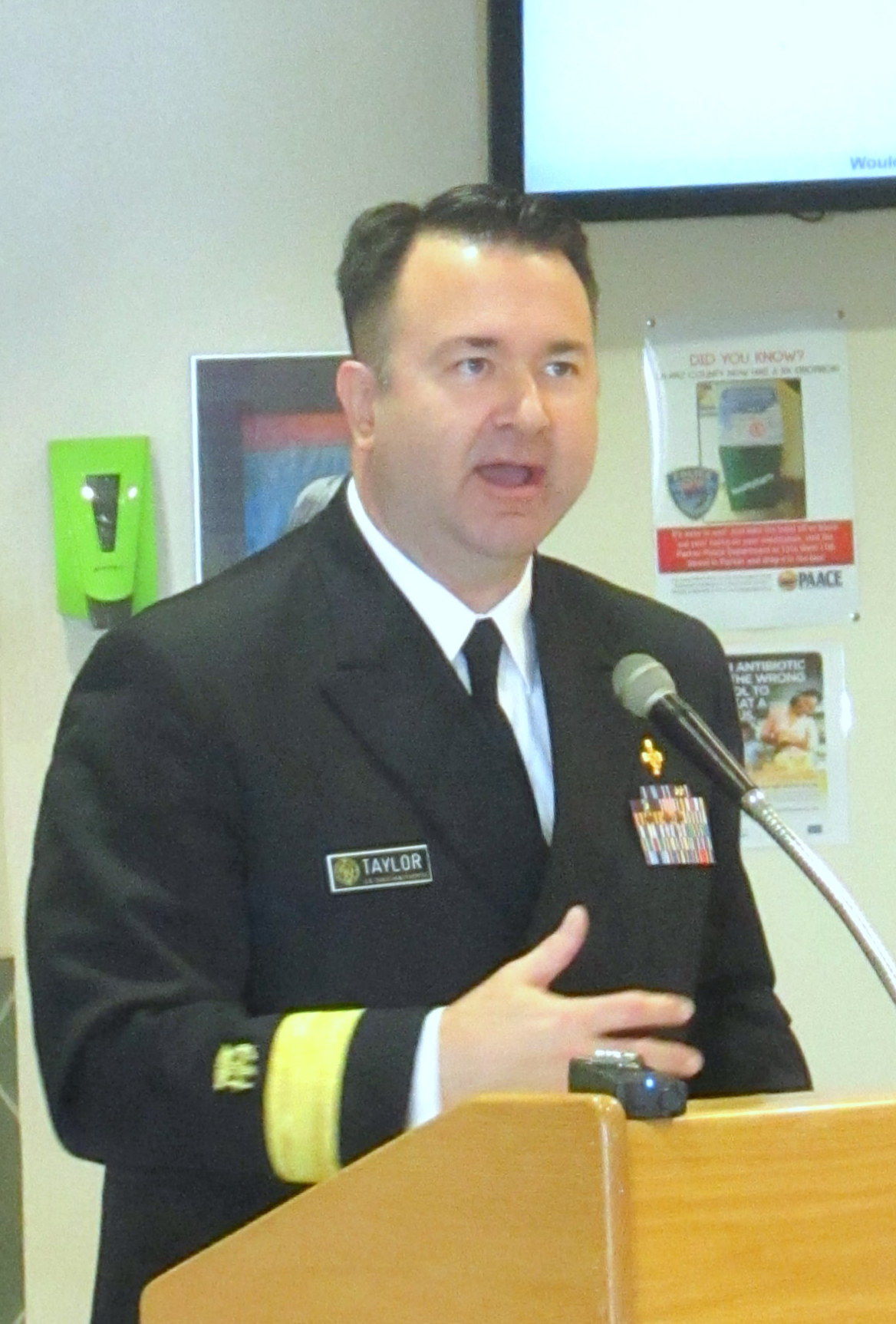 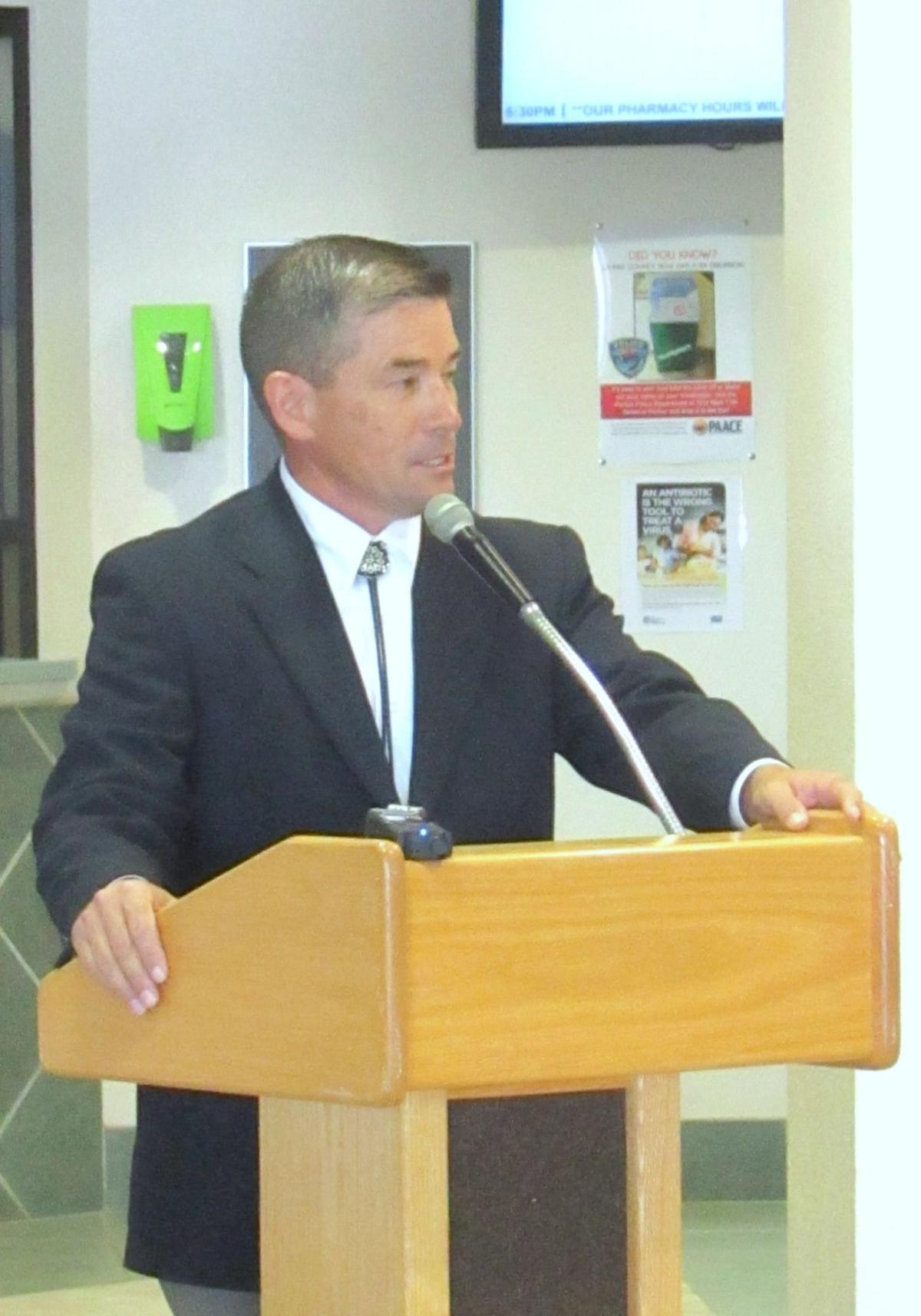 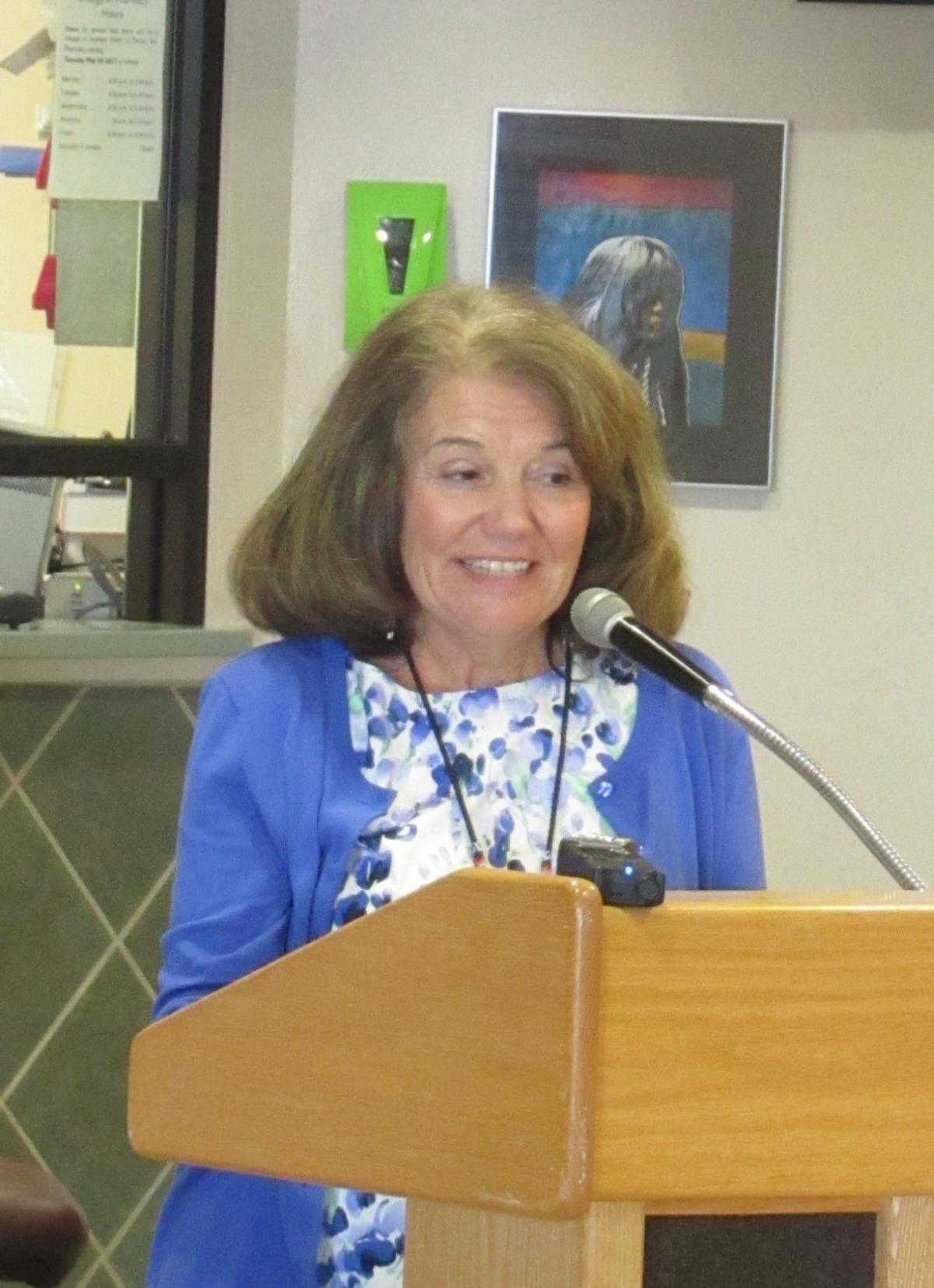 Elizabeth Helsel, the CEO of Parker Indian Health Center said she was excited for the community, Tribes and HIS with the new CT scan facility. 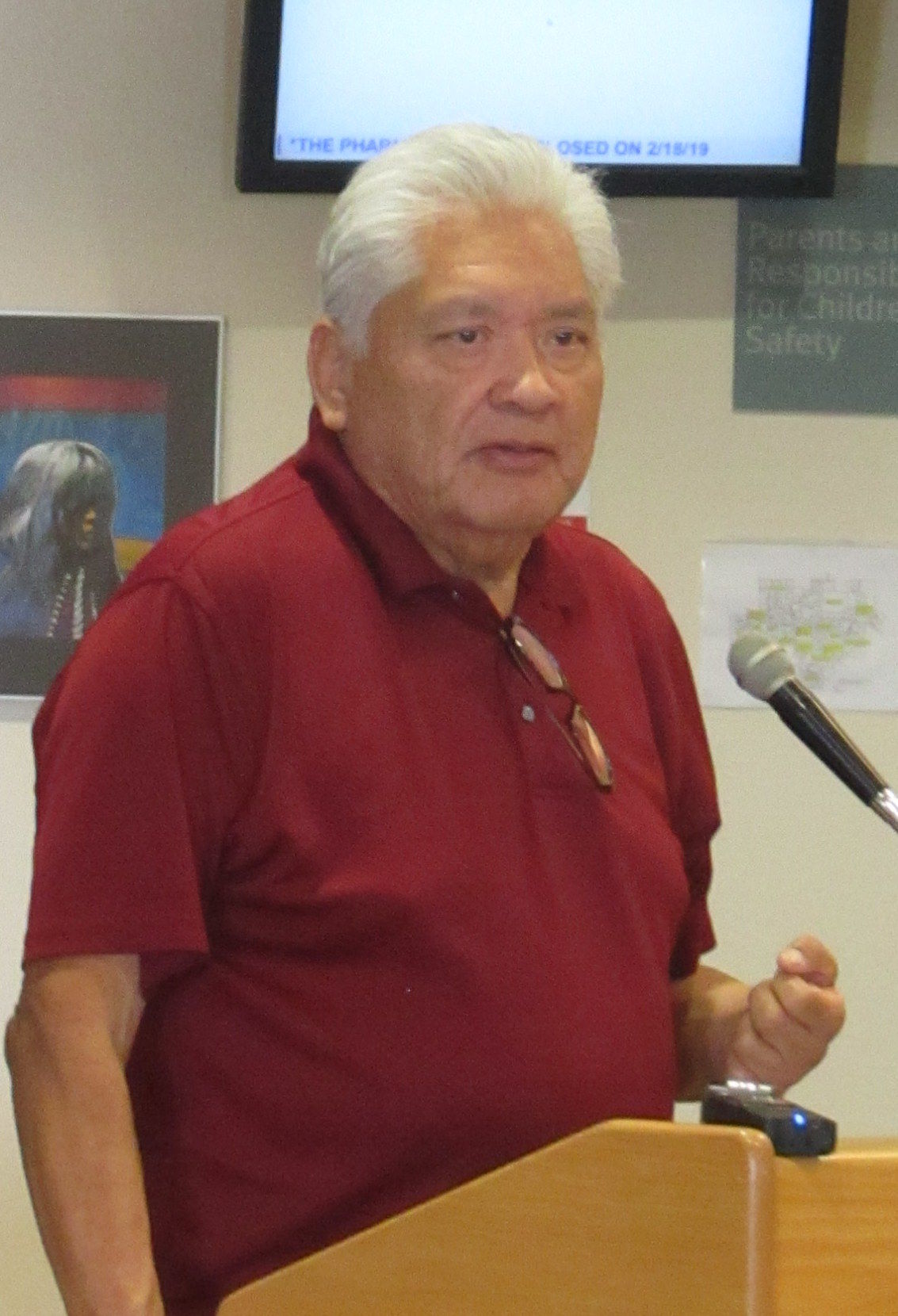 CRIT Chairman Dennis Patch said the new CT facility would save lives by cutting down the time needed for diagnostic scans. 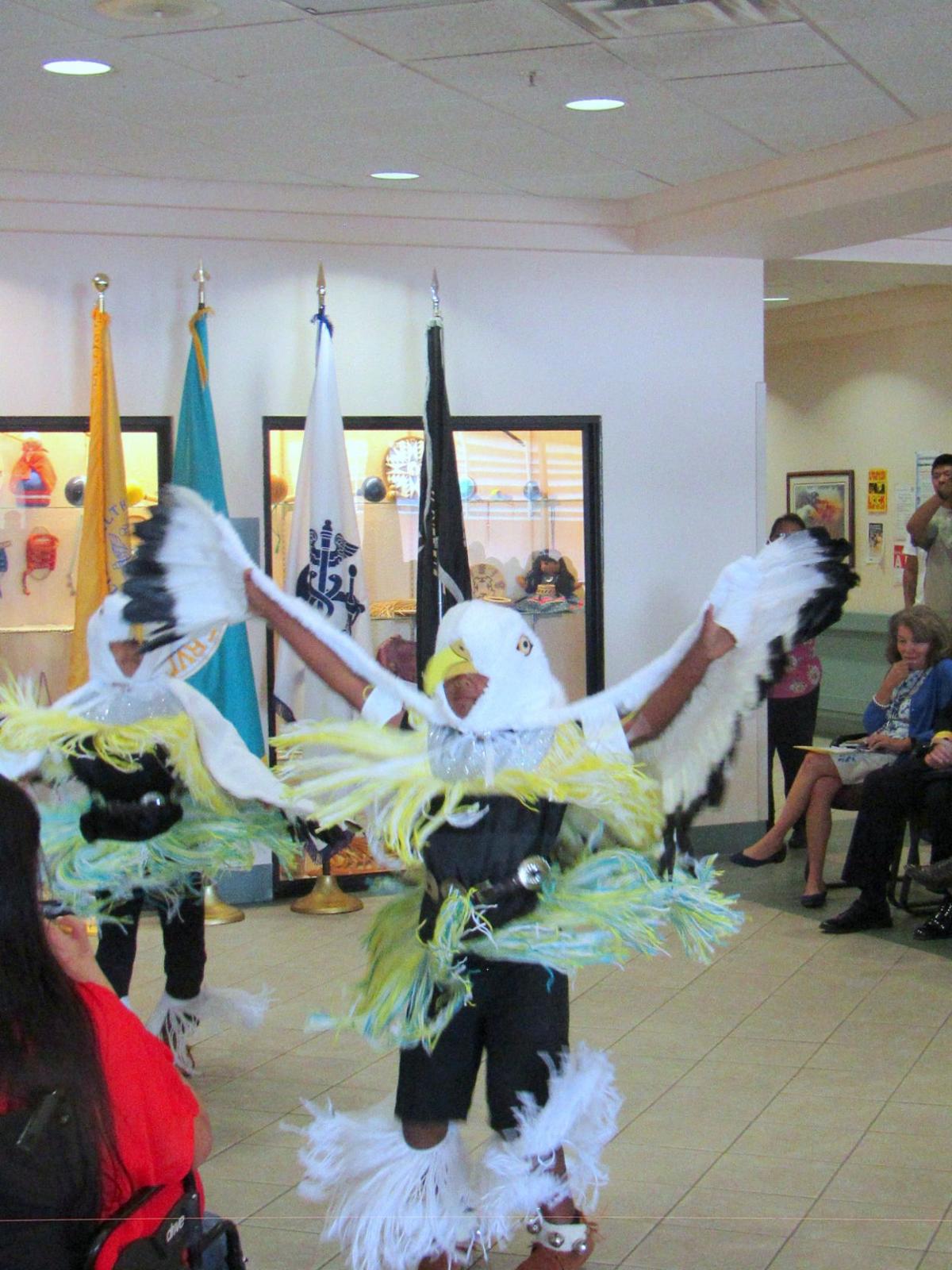 Navajo eagle dancers, the McCabe family, performed at the dedication ceremony for the CT scan facility. 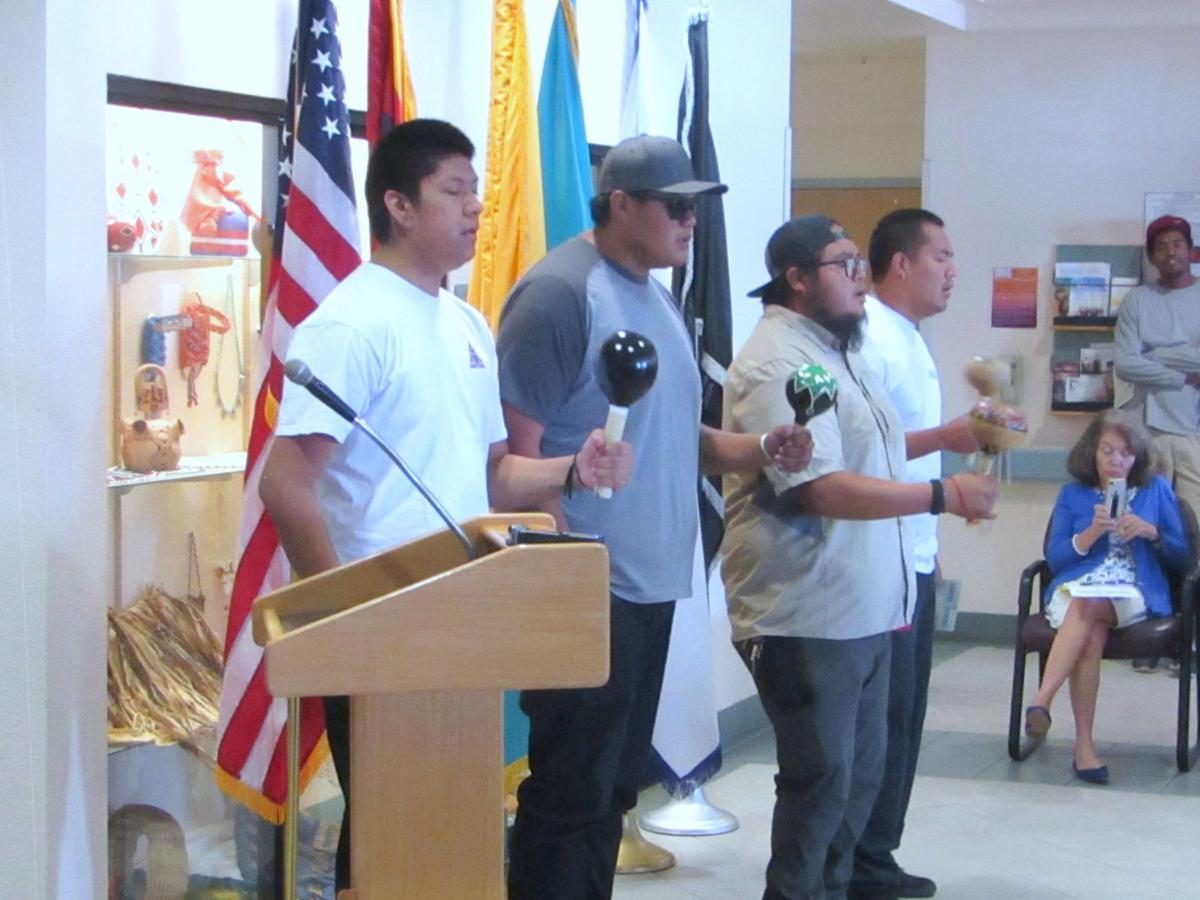 The Ase S’maav Bird Singers performed at the dedication ceremony. 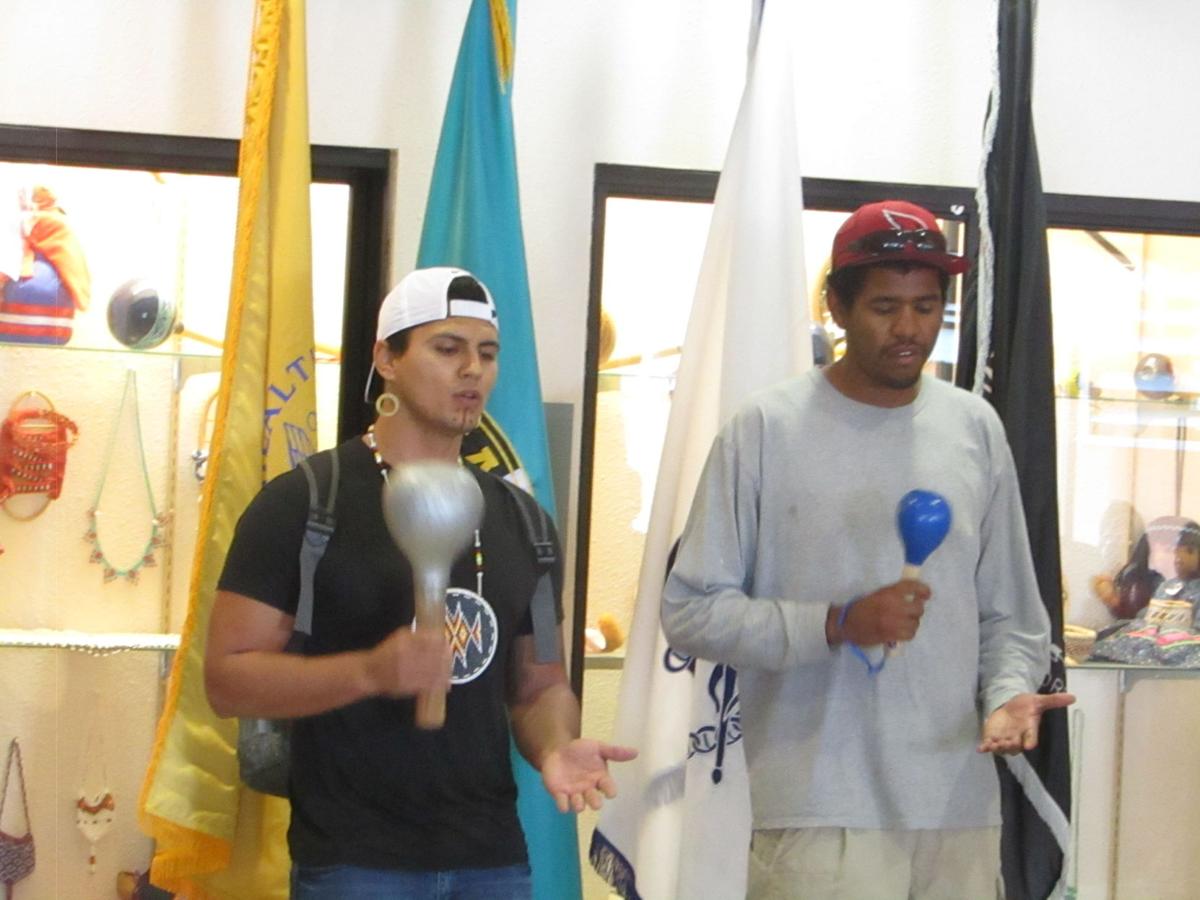 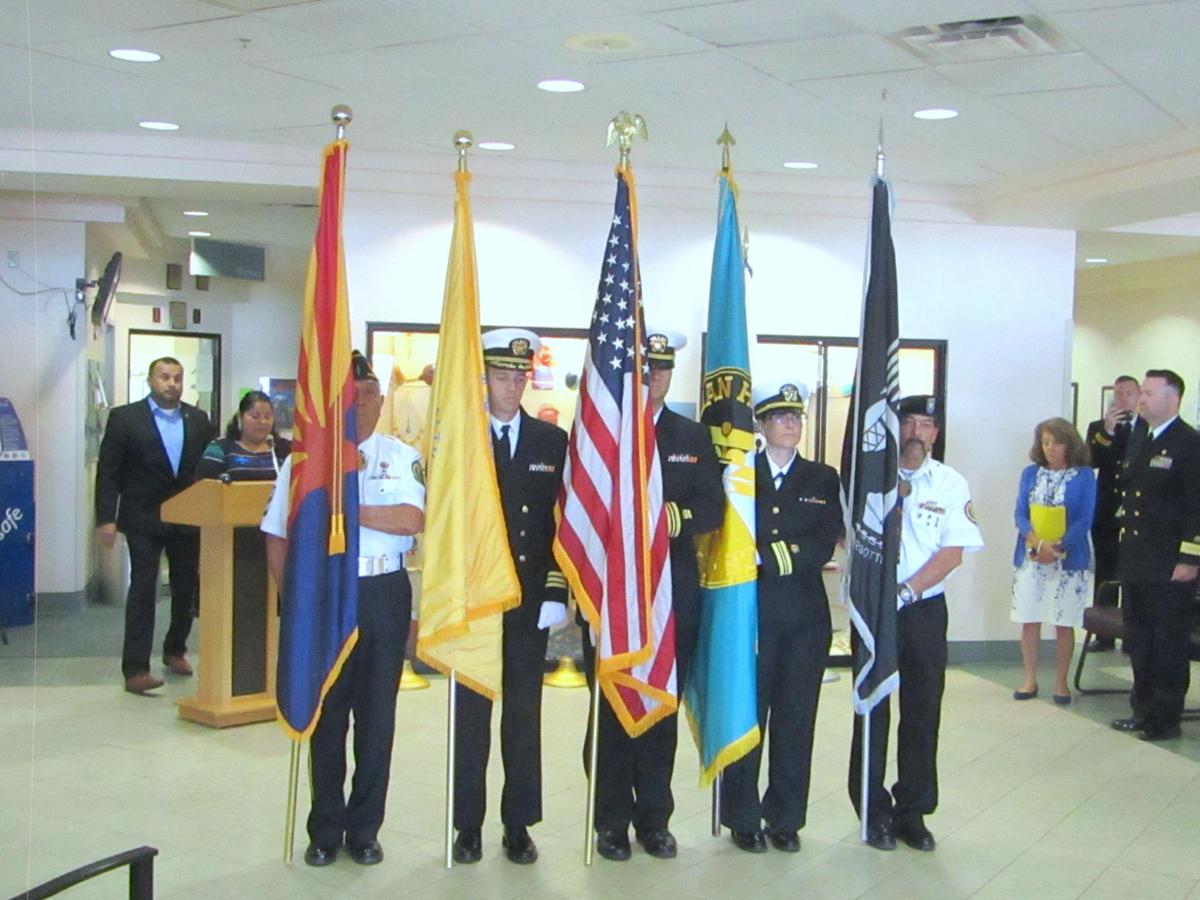 The colors were presented by members of the Freeman H. Sharp American Legion Post No. 70. 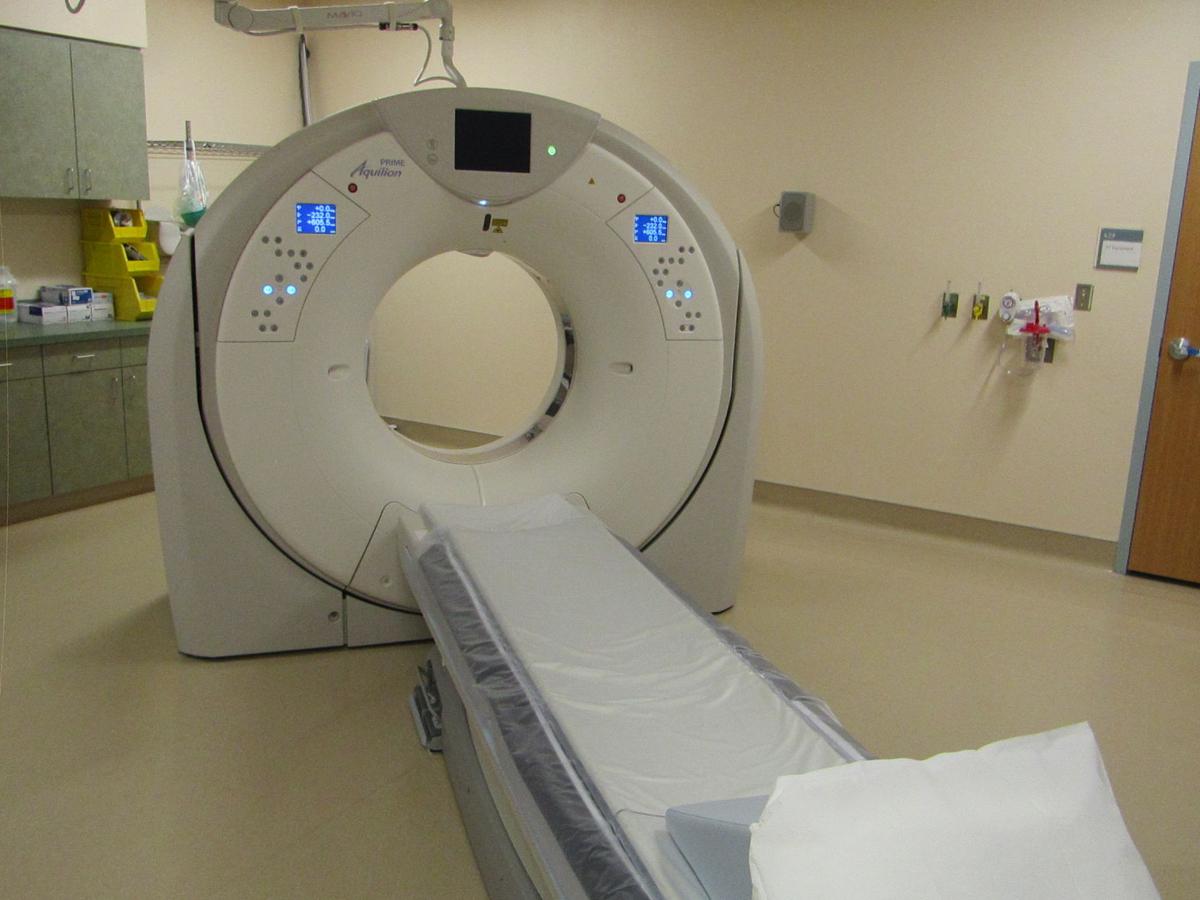 Elizabeth Helsel, the CEO of Parker Indian Health Center said she was excited for the community, Tribes and HIS with the new CT scan facility.

CRIT Chairman Dennis Patch said the new CT facility would save lives by cutting down the time needed for diagnostic scans.

Navajo eagle dancers, the McCabe family, performed at the dedication ceremony for the CT scan facility.

The Ase S’maav Bird Singers performed at the dedication ceremony.

The colors were presented by members of the Freeman H. Sharp American Legion Post No. 70.

It was a celebration that brought the Chief of Staff or Indian Health Services to Parker. Parker Indian Health Center had a dedication and ribbon cutting for their new CT lab Sept. 10. The new facility had been in the works since 2014. CT scans are often called “cat scans.”

The ceremony was held in the front lobby of PIHC. Perfecto Cronemeyer, Chief Operating Officer for PIHC, served as master of ceremonies. Following the speakers, the group moved to the CT lab, where a ribbon was cut in front of the new CT machine.

Among the special guests for the occasion was R. Adm. Brandon Taylor, the Chief of Staff for IHS. He said this would enhance the quality of life for tribal members. He congratulated the leaders of the Colorado River Indian Tribes and everyone who had a hand in getting the lab built.

“Congratulations on your vision becoming a reality,” Taylor said.

Another guest was R. Adm. Ty Reidhead (ret.), the Director of the Phoenix Area of IHS. He thanked the Tribal Council for their work and support. He said tribal members would no longer need to travel long distances for diagnostic services.

“This is a celebration,” he said. “Take the opportunity to celebrate your daily blessings and those who take care of you.”

CRIT Chairman Dennis Patch said the new CT lab will save a lot of lives.

“We were losing too many people who had to be sent out for CT scans and MTIs,” he said. “We wanted to get this done, and you bet we got this done.”

Elizabeth Helsel, the Chief Executive Officer of PIHC, said she was told by the Tribal Council when she started at PIHC four years ago that they wanted the CT scan facility built, up and running. She thanked Kevin Brown, the CEO at La Paz Regional Hospital for doing CT scans for them prior to the building of the new facility.

Perfecto Cronemeyer, PIHC Chief Operations Officer, said it was a trying time getting the facility built, but added it gave a badly needed service to their patients. He asked the audience to give a round of applause to everyone involved.

Near the end of the ceremony, the PIHC Director of Professional Services, Lt. Cmdr. Brenda Hoverson, RN, introduced the people who would be operating the CR scan lab, the radiology staff.

The ceremony saw performances of Mohave bird singers and Chemehuevi salt singers. The McCabe family of Navajo eagle dancers also performed. The National Anthem was sung by Hanaga Fisher. The colors were posted by members of the Freeman H. Sharp American Legion Post No. 70.

Helsel thanked the Parker Regional Chamber of Commerce & Tourism for their support and assistance with the ribbon-cutting.

Ground was broken for the new facility in 2017. The approximate cost was $3 million. Several speakers at the Sept. 10 ceremony said the facility had been up and running for almost two weeks, and it had been used more than a dozen times even before the dedication ceremony.

I don't know why Dennis Patch was given the scissors to dedicate new CT scan facility. I spoke with PIHS CEO Elizabeth Helsel yesterday and I asked her where the 3 million dollars came from to pay for it? She said The Federal Government paid for it. I asked her if CRIT Government put any of there own money towards it, She said "NO" zero. So this is all federal taxpayer dollars who paid for this and she said "yes". I don't understand how Dennis Patch made it seem to appear he paid for it?

To the Editor: Assessor’s letter was not accurate

From the Dugout: Ending a championship series on a dumb play

The National and American League Championship Series have been set. It will be the…