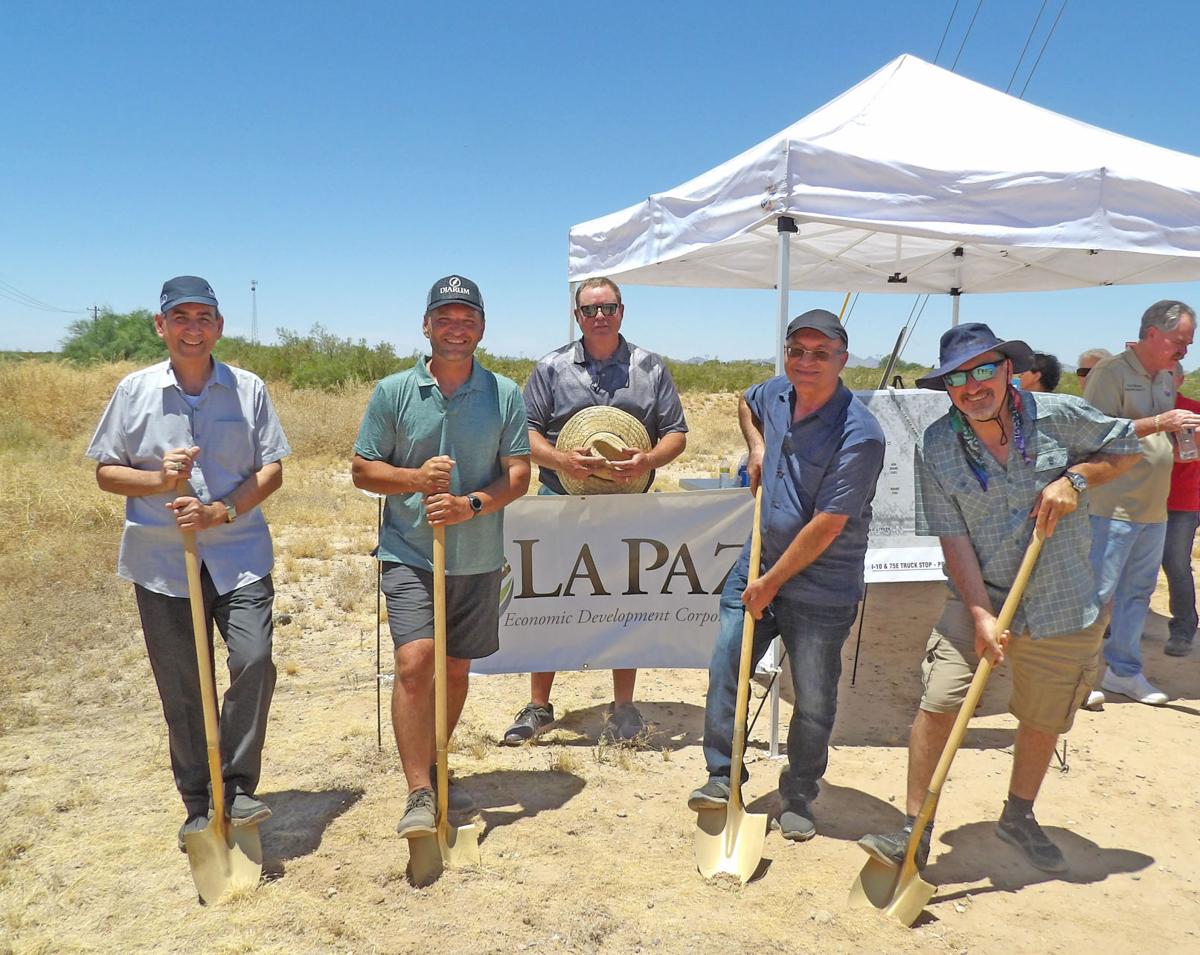 The partners in a $10 million truck stop project for the interchange of I-10 and Avenue 75E broke ground for the project May 29. They were joined by Skip Becker of the La Paz Economic Development Corporation. Turning the dirt were (from left) Nick Ramo, Sadir Hiedo, Becker, Art Hiedo and Nasim Hiedo. 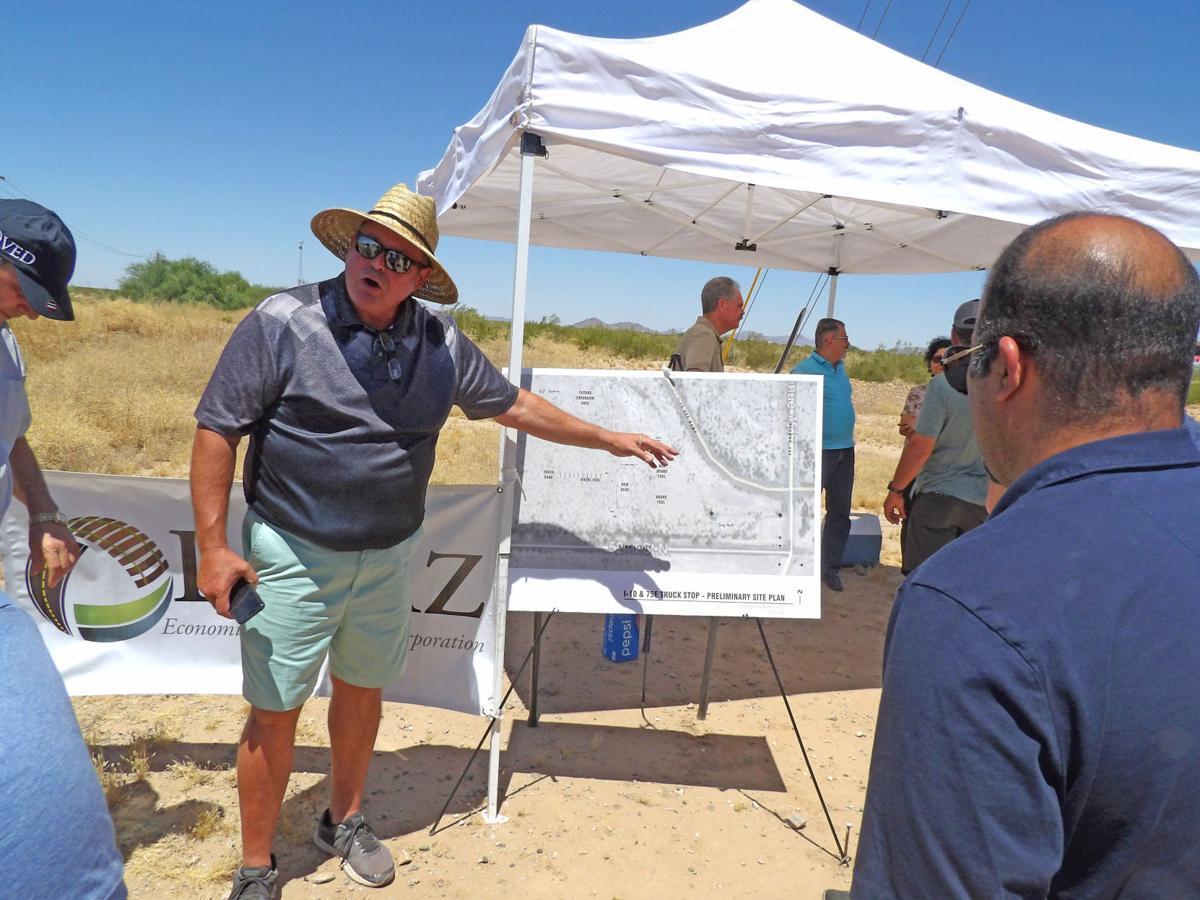 Skip Becker of the La Paz Economic Development Corporation explained the layout of the proposed truck stop development to the attendees at the groundbreaking on May 29. 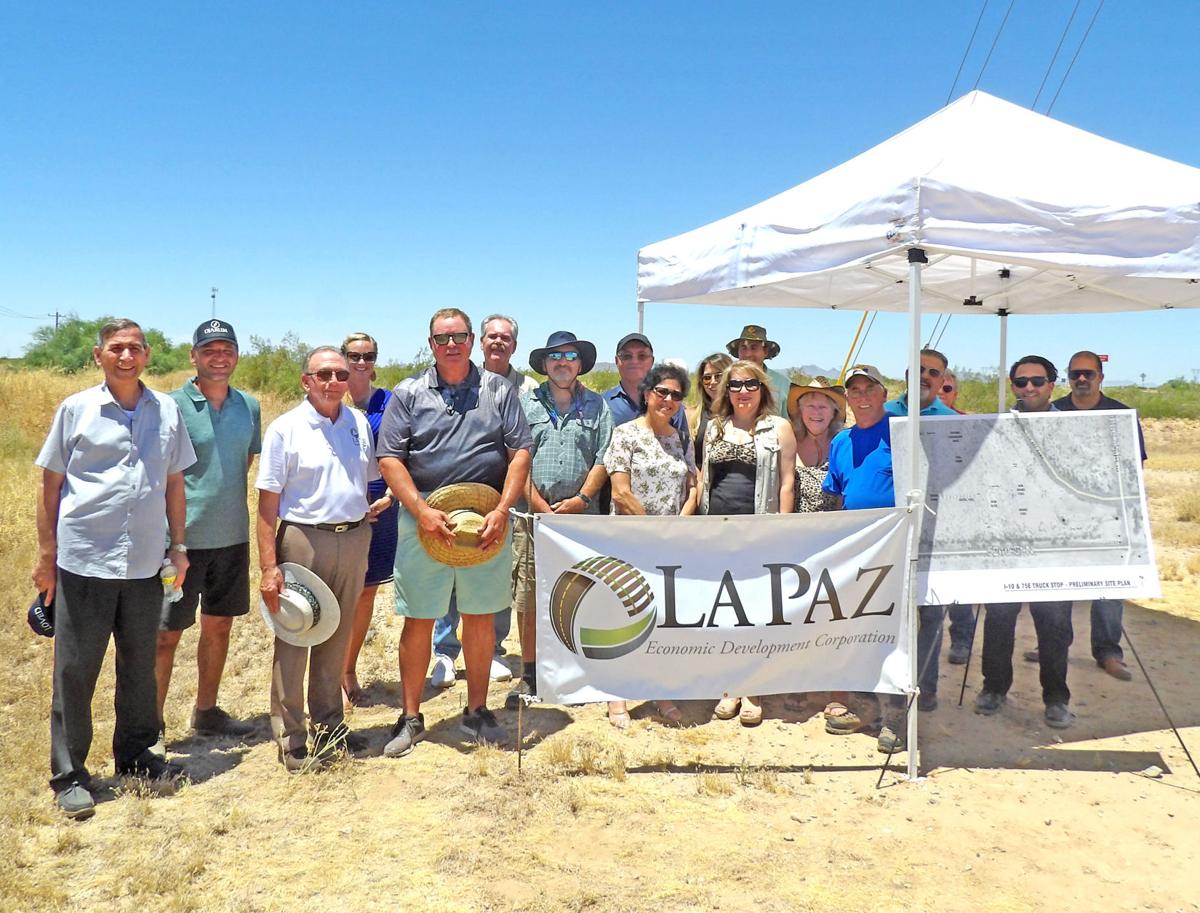 Attendees at the May 29 groundbreaking included the partners in the truck stop project and officials from the La Paz EDC, La Paz County and the Parker and McMullen Valley Chamber of Commerce.

The partners in a $10 million truck stop project for the interchange of I-10 and Avenue 75E broke ground for the project May 29. They were joined by Skip Becker of the La Paz Economic Development Corporation. Turning the dirt were (from left) Nick Ramo, Sadir Hiedo, Becker, Art Hiedo and Nasim Hiedo.

Skip Becker of the La Paz Economic Development Corporation explained the layout of the proposed truck stop development to the attendees at the groundbreaking on May 29.

Attendees at the May 29 groundbreaking included the partners in the truck stop project and officials from the La Paz EDC, La Paz County and the Parker and McMullen Valley Chamber of Commerce.

Ground was broken Friday, May 29, for a $10 million truck stop development project on Interstate 10 near the Maricopa County line. Avenue 75E LLC plans to build the truck stop on 15.9 acres at the southwest corner of the interchange of I-10 and Avenue 75E.

The groundbreaking was attended by the partners in the development and their families, and officials from the La Paz Economic Development Corporation, La Paz County, Arizona Public Service and the Parker and McMullen Valley Chambers of Commerce.

Skip Becker, President of the La Paz EDC, has worked closely with the family that is partnering in this project. At the groundbreaking, he said the project was started three years ago. He added it represents a major investment in eastern La Paz County.

“Avenue 75E LLC will provide much needed jobs and sales tax revenue to the area,” Becker said. “Employment numbers should reach 20 or more at all levels.”

The proposed solar project will be located west of the Avenue 75E truck stop on almost 6,000 acres of land that was recently conveyed from the U.S. Bureau of Land Management to La Paz County. In March, La Paz County signed an agreement with 174 Power Global, a South Korean company, to build a solar energy facility on 4,000 acres. At 850 megawatts, it will be the largest solar project in the nation. It’s estimated 800 to 1,000 construction jobs will be created, with the facility producing enough power for 300,000 homes.

“I always take a comprehensive business model,” Becker said. “It’s important to differentiate your product from the competition and make sure it is successful.”

Becker thanked architect Christopher Thompson of Yuma for his design work and Jim Downing of the Harcuvar Corporation for his civil engineering work. He thanked APS for their work on the utilities. He added that well-drilling should start within the next 15 days.

He especially thanked the partners in Avenue 75E LLC for bringing this project to La Paz County.

“I want to thank our clients, Nickolas, Nathan, Art, Sadir and their families for choosing the La Paz EDC to bring their dream of developing this project to fruition,” he said. “It’s been an honor getting to know this family.”

The partners said they would keep the Pioneer and other local media posted on the progress of the project as it moves along.

I have one simple question. Up in Tonopah Nevada there is a huge solar project that was financed by public and private money that has failed to meet expectations and public money is now being withdrawn. What are the fundamental differences between these two projects ? Is this going to be a repeat of the experience in Tonopah Nv. ?

To answer your question.....

The one you mention in Tonopah is a Solar Facility.

This is a Truck Stop.

So it probably won't be a repeat.

Youre so cool! I dont suppose Ive read anything like this before. So nice to find somebody with some original thoughts on this subject. realy thank you for starting this up. this website is something that is needed on the web, someone with a little originality. useful job for bringing something new to the internet! Mobile Game

And it's not just the United States. The rest of the world is keeping pace pound for pound. As a species, we are getting steadily fatter, day by day, year by year. This is not just a question of vanity. Along with weight gain comes the increased risk of chronic conditions such as diabetes and heart disease--not to mention all of those things you don't even think about, such as an increased risk of injury on the job. ketogenic diet building muscle

They give away so much credible information regarding their Internet Marketing strategy for free. These can include training material, which teaches their marketing system and the potential earnings if you put the needed effort and investment. Hence I said investment. Now you may be wondering, this is another kind of manipulative trick to make a payment to these sites, and gain nothing. I said investment because this comes as an investing your earnings just like any other business that exists in general. For instance, if you were to buy a franchise company, the amount you'll have to ask your bank to lend you is somewhat way too high, that may scare you a little. Why? This is because it is an offline business. This does not mean that it should not have a website, but the essence of it is the offline system that requires lots of attention and maintenance. That's why you may need to pay to purchase a franchise for hundred to two hundred thousand dollars to have a credible business yourself. seo solution company

Which businesses are on Tribal land?

To the Editor: Graduation parade was a wonderful event

Ducey tells Arizonans to limit time away from home during pandemic