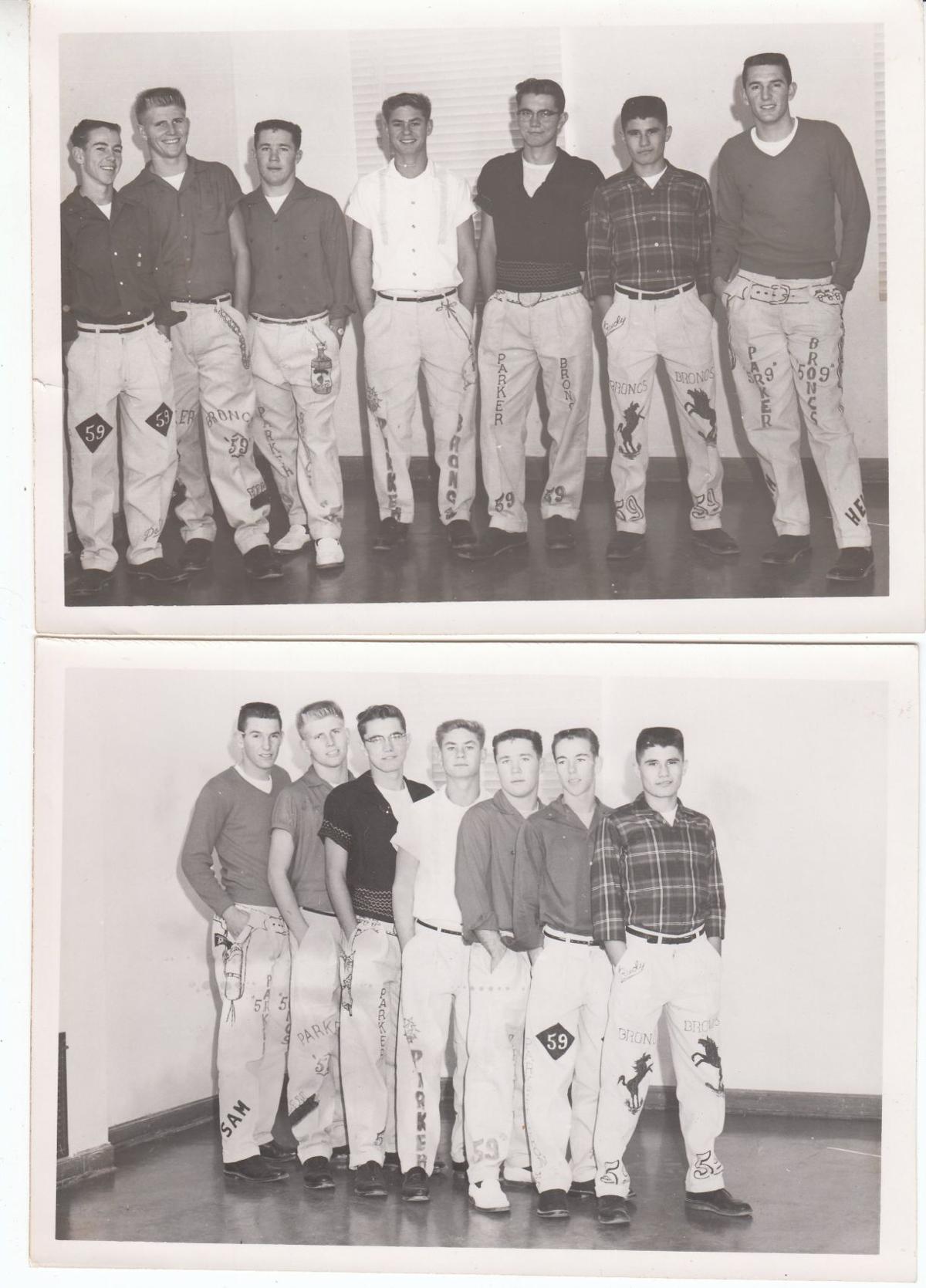 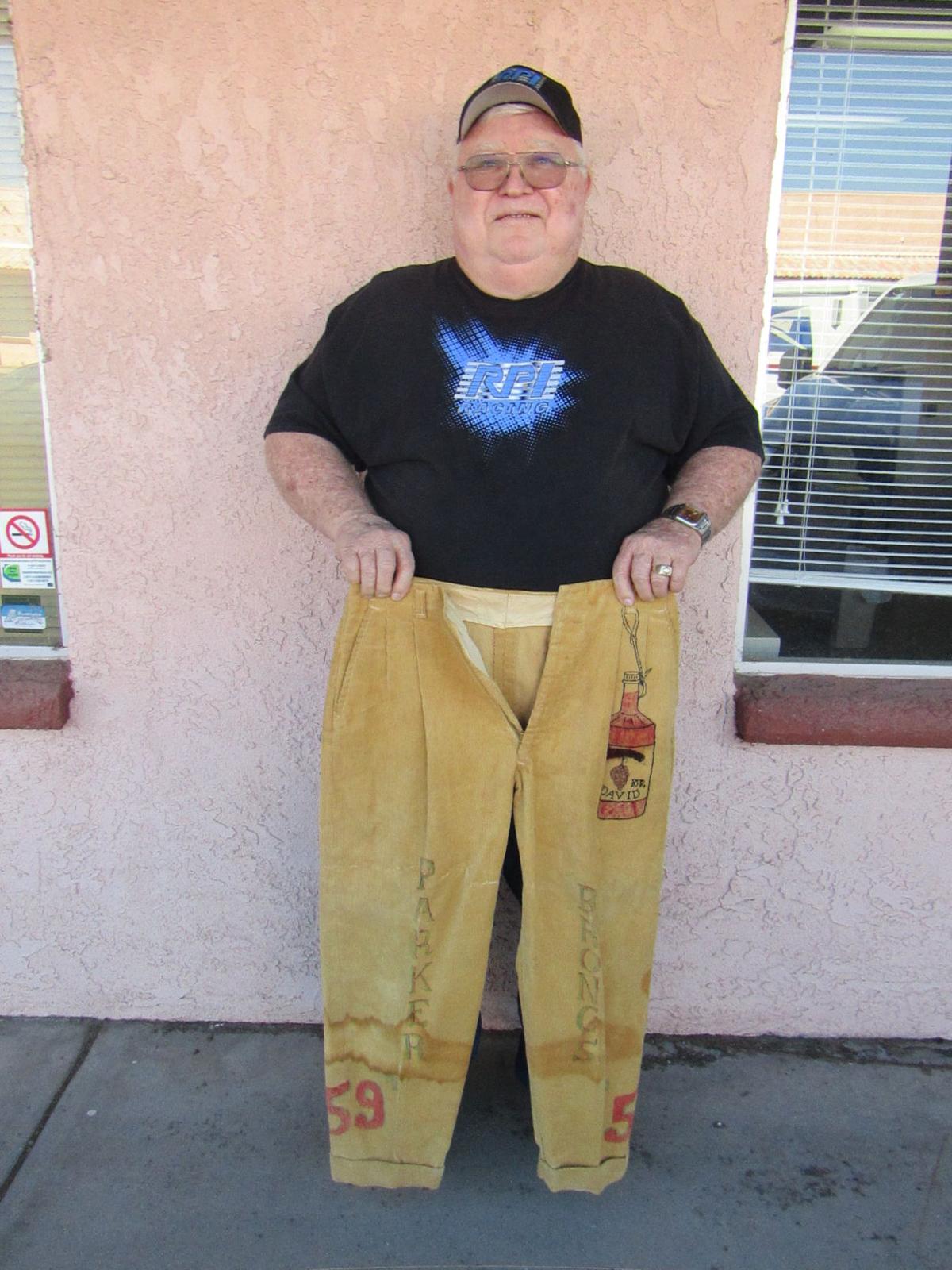 One of the Yellow Cord Boys, Carl Roland, still has his pair of yellow corduroy pants after 60 years. He admitted they don’t fit him anymore. Roland is one of six of the eight Yellow Cord Boys who is still alive.

One of the Yellow Cord Boys, Carl Roland, still has his pair of yellow corduroy pants after 60 years. He admitted they don’t fit him anymore. Roland is one of six of the eight Yellow Cord Boys who is still alive.

They were called the Yellow Cord Boys. They were eight boys from Parker who went through grade school, junior high and high school together, and they graduated from Parker High in 1959. They’ve remained close ever since. Now, as senior citizens, they’re getting together for a reunion at the 60th anniversary of their graduation from Parker High. They’ll hold their reunion at 11:30 a.m. Friday, Oct. 11 at Pirate’s Den Resort in La Paz County Park.

The reunion is planned during Homecoming Week, and they plan to attend the PHS Homecoming football game that evening at 7 p.m.

Rudy Burgoz was one of the Yellow Cord Boys, and the organizer of the reunion. He said six of the group are still alive:  Dale Haggard, Sam Blake, Billy Ripberger, Carl Roland, Don Martin, and himself. The two others, Alan Cox and Augie Fisher, died some time ago.

Burgoz said they were given the name the Yellow Cord Boys because, in their senior year, all but two of them purchased yellow corduroy pants, which was the closest they could find to their gold football pants. All eight of them played on the football team, and several of them also played baseball.

The pants were decorated with PHS slogans and symbols by Gus Torres. Burgoz remarked that Torres was quite an artist.

Playing football for Parker High School in those days was very different from what it is today, Burgoz said.

“We had only two classes in Arizona, A and B,” he said. “We were in the B West. Wickenburg was our biggest rival, with the firefighter’s axe and all. We also had Antelope, Gila Bend, Buckeye, Bagdad and Peoria and Phoenix Christian, if you can believe it.”

Burgoz said the Yellow Cord Boys followed different paths once they left Parker High. He said Ripberger, Haggard and Roland stayed in Parker, but the others moved elsewhere.

“Sam Blake worked for Metropolitan Water District and retired to Prescott Valley,” he said. “Alan Cox became a railroad worker. I became a business teacher in high schools and at Phoenix College.”

He couldn’t recall their first names, but Burgoz said several teachers influenced him. A math teacher, Mr. Hatch, influenced him into become a teacher. He was encouraged to study engineering, and he had to take math and business courses in college. He discovered he liked the business courses, so he changed his major to business. He soon found he also liked teaching business classes.

Parker has changed a lot since those days, Burgoz said. Many of the old buildings have been torn down. The town didn’t even have television reception until later. Burgoz said young people in those days made do without a lot of things they have today, like computers, video games, the Internet and cell phones. At the same time, they did a lot of things young people don’t do today, like make their own music in the desert.

Parker wasn’t quite the hot spot that attracts people to the Colorado River that it is now.

“The Colorado River wasn’t like it is now,” Burgoz continued. “You were lucky if you had a boat.”

Burgoz said he remembered the Grand View Hotel that stood at the corner of Arizona and California Avenues. The Parker Theater on Arizona Avenue was a popular place for young people to gather. He said he worked for a time for Claypool’s Grocery, which has since gone through several owners and is now Food City.

Although he hasn’t lived in Parker for many years, Burgoz said his heart is still here.

“I have fond memories of Parker,” he said. “That’s where my roots are. That was the beginning of a successful career.”

Bourgoz requested that anyone who wants to join them for their reunion lunch on Oct. 11 make their own reservations with Pirate’s Den at 928-667-3102.

The co-owner of a local gun shop that also sold gold, silver and collectibles took…