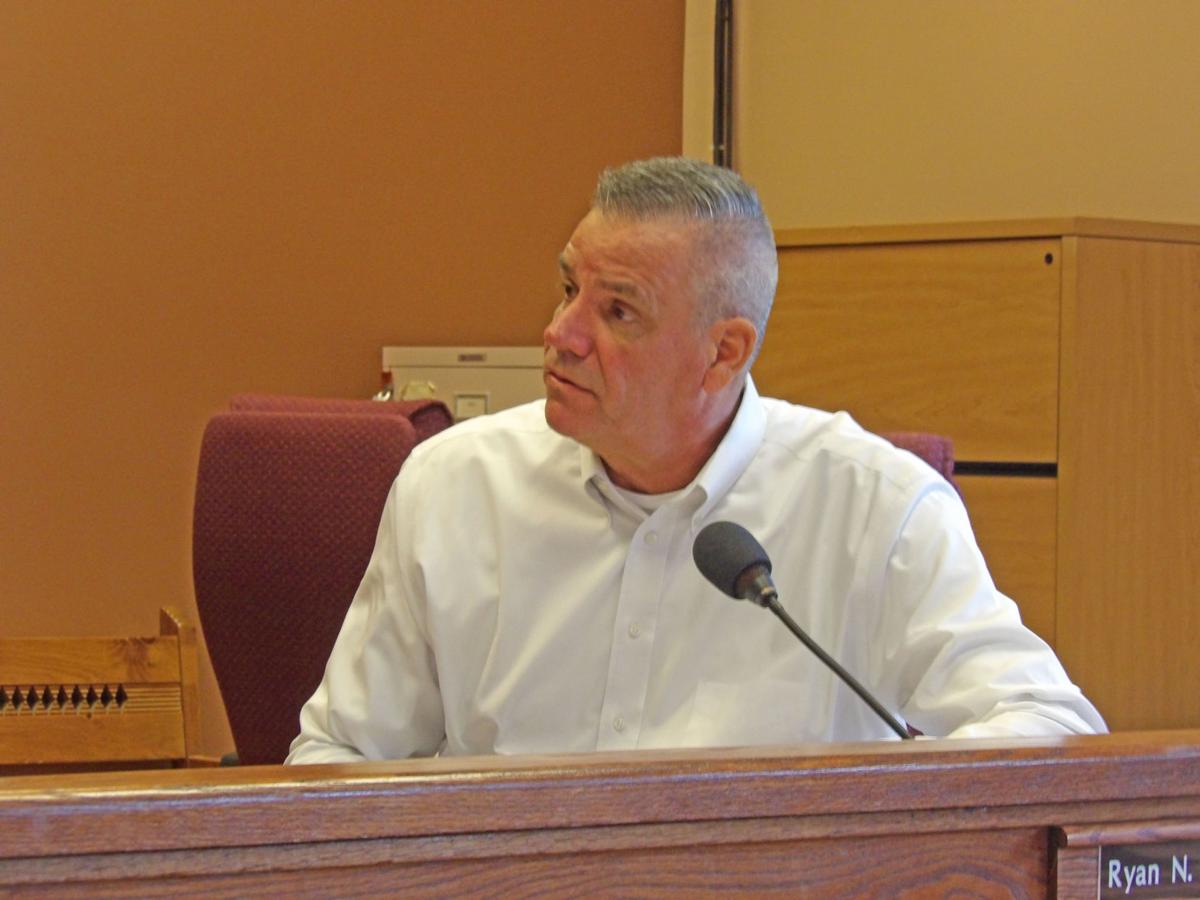 La Paz County Administrator Ron Drake said he and Finance Director Terry Krukemyer created revisions to the budget proposals so the county could do the most it could with the money it has. 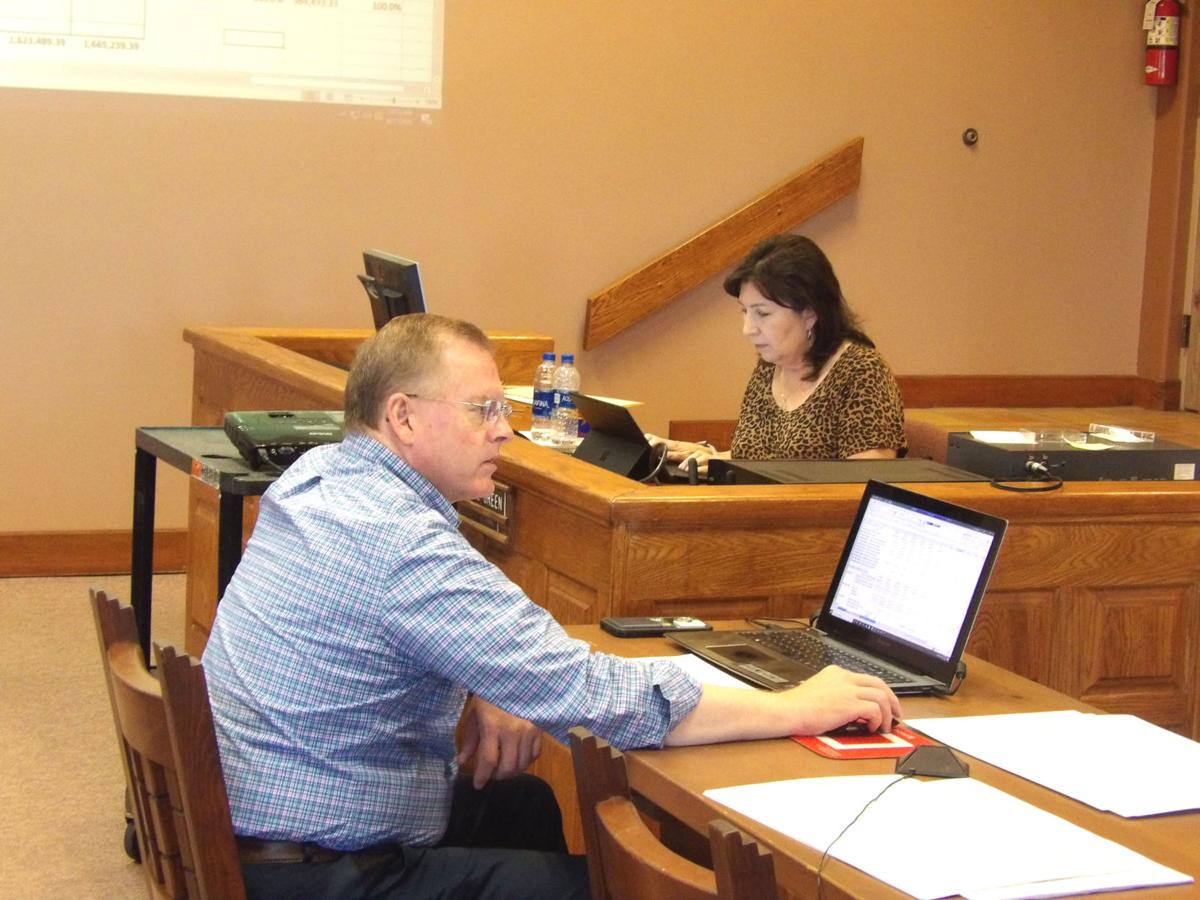 La Paz County Finance Director Terry Krukemyer (foreground) presents budget revision proposals to the County Supervisors June 17. Behind him is Clerk of the Board Diane Green.

La Paz County Administrator Ron Drake said he and Finance Director Terry Krukemyer created revisions to the budget proposals so the county could do the most it could with the money it has.

La Paz County Finance Director Terry Krukemyer (foreground) presents budget revision proposals to the County Supervisors June 17. Behind him is Clerk of the Board Diane Green.

EDITOR'S NOTE:  A follow-up to this meeting is what's planned for a work session Wednesday, June 24, at 10 a.m.

“We’re looking at every budget and asking where we can save the county the most money,” Drake said.

Krukemyer explained that, while the overall county balance was estimated to have a surplus, the general fund was coming up $516,000 short on revenues estimated at $18 million. He said over $1.45 million in cuts were made to produce a positive balance of $633,000.

Krukemyer told the board that these were conservative estimates as far as revenues went. He said sales and excise tax revenues are expected to be lower in the coming fiscal year due to restrictions from the coronavirus pandemic.

The overall county budget is estimated at $35.6 million in expenses with $39.2 million in revenue. Krukemyer said this included special funds, grants and the jail district.

The jail district’s revenue is estimated at $7.4 million, but that’s only if the district gets paid for beds for 200 federal prisoners. Krukemyer noted a new contract is needed for the county to receive federal prisoners.

“If we don’t get that contract, this budget is out the window,” Krukemyer said.

As an example, Krukemyer and Drake said the Emerald Canyon Golf Course wanted to purchase 10 new gold carts at $5,000 each or $50,000 for all of them. This was cut to five new carts at a cost of $25,000. Drake said the course needed new carts as some of the ones they have are 12 years old.

Course Director Steve Benton said they have 35 carts, which means that, with few new ones per year, they’d have a complete turnover in seven years.

Some line items were actually increased. In the current fiscal year, Central Dispatch had $1,000 budgeted for software, but they actually spent $2,100. The amount for the new fiscal year was increased to $3,000.

Drake and Krukemyer announced a small increase in the minimum wage for county employees. It will go from $14 per hour to $14.10 per hour.

Assessor Anna Camacho noted her request for two new employees had been removed. Camacho has been vocal is saying her office needs more staff to get their work done properly.

Drake responded that every county department is short-staffed because the county does not have a lot of money.

“We’re trying to do what we can with the money we have,” he said.

Another work session to discuss appeals on the budget proposals will be scheduled for this week.

There are 20 government agencies in La Paz County carrying guns. The sheriff, DPS, Parker PD, Quartzsite PD, Border Patrol, to name a few. Do we even need deputy sheriff's? Every time I go by the Sheriff's Office, it seems that every Sheriff vehicle is out front, parked. In other words, why are deputies needed at all if they're not on patrol? Get rid of the waste in the Sheriff's Office and you have plenty of money to hire employees in the Assessor's Office, where they would generate revenue, not p*ss it away as the sheriff is doing by training new recruits, only to lose them to big-budget police departments. Where is it written in LPC's Charter that taxpayers are supposed to fund training for the Phoenix Police Department's officers? If the sheriff isn't imaginative enough to figure out how to retain recruits, then just cut his funding in half. Boom. Problem solved. No more new recruits that can quit.

You don't know what you're talking about. Some of those vehicles are not being used at the moment, in other words many of the vehicles are not assigned to anyone. These deputies are out in their districts doing their job. And they also have duties to do at the sheriff's office some times during their shifts. Every deputy, detention officer and dispatcher should sign a contract not to leave for at least 2 or 3 years. But, is that really binding if someone and their family has no choice but to move? What if their spouse gets hired in another state because they applied for work?

[thumbdown] These budget cuts are not needed, why can't Drake and all these department heads take a cut in pay? Those raises for them should of never been approved and shame on those on the board of supervisors that approved them. Maybe the public should inquire from county employees how their payroll keeps getting messed up. This socalled inteligent finance director can't do payroll right. Employees have to email them every pay period to let them know they messed up on their balances of vacation hours, comp hours and even sick hours. He can't even take out the right amount of funds for ASRS or other deductions that employees have coming out of their paychecks. Seems like we need a better finance director, but his bestie Mr. Drake won't consider that.

Peaches to all the new teachers in the Parker Unified School District. I will tell…