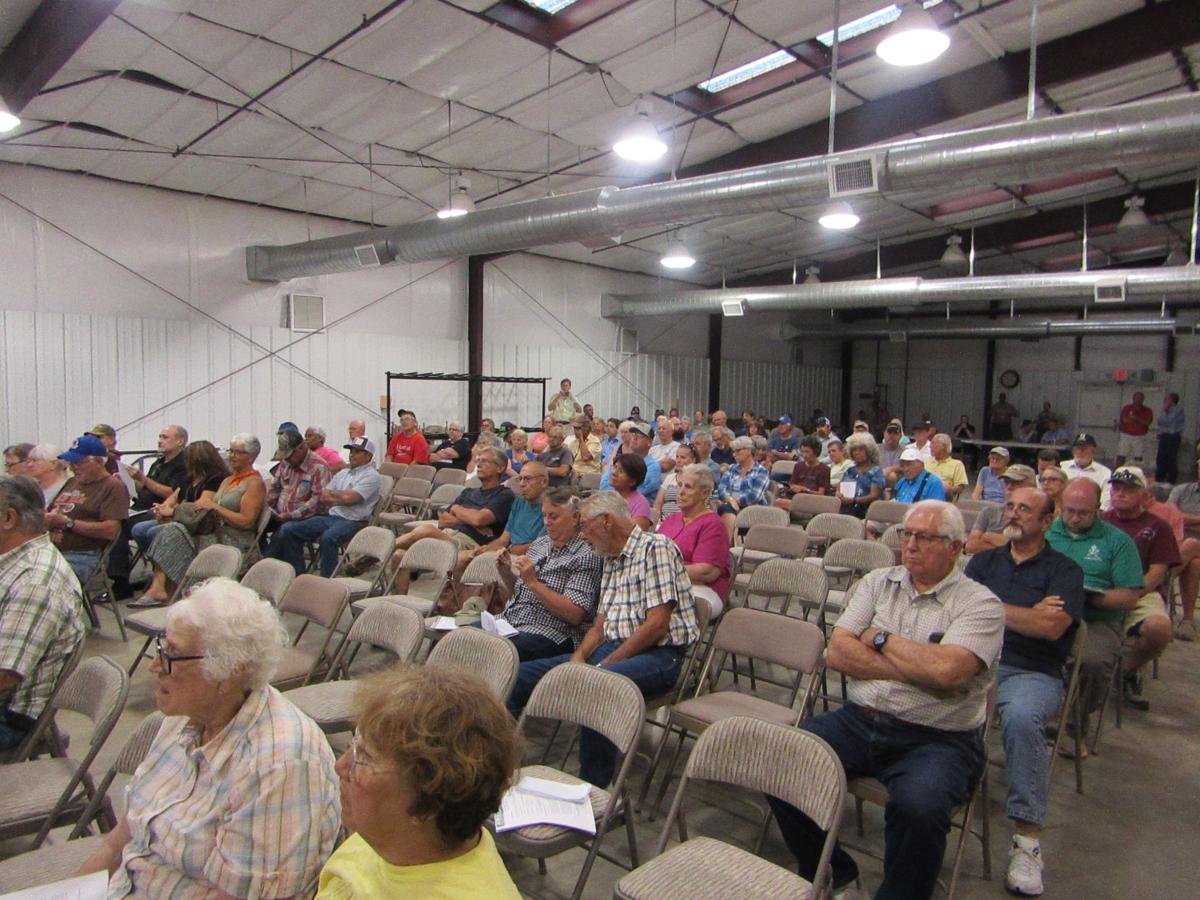 Salome and Wenden residents were at the Centennial Community Center Sept. 4 for an ADEQ public hearing on an air quality permit for a proposed aluminum smelter to be built between Salome and Wenden. Several speakers commented that, if the winter visitors were back, the center could not have held the audience. 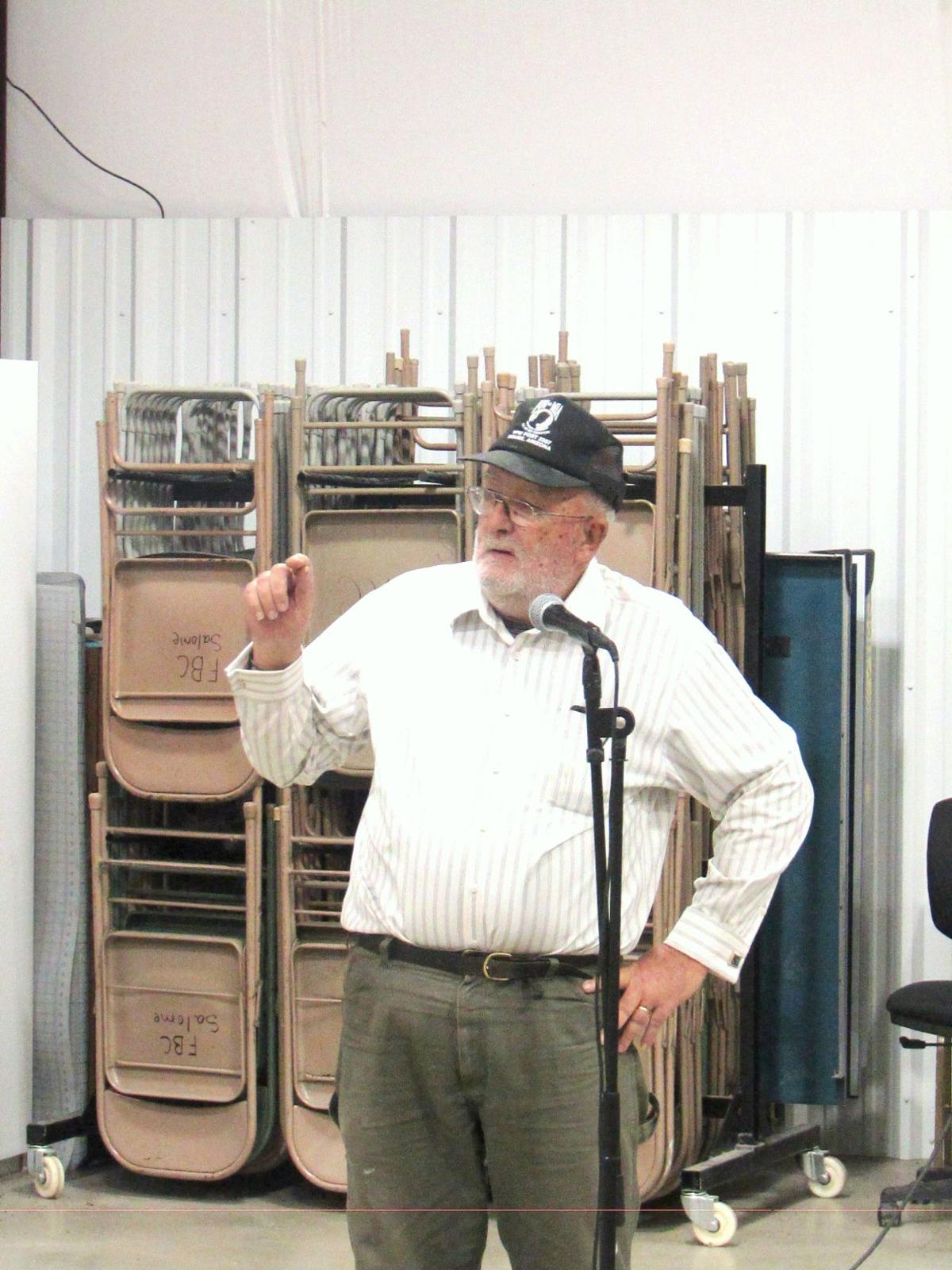 Wenden resident Larry O’Daniel spoke against the proposed smelter at its planned location. He said it should be put in an area zoned for heavy industry. 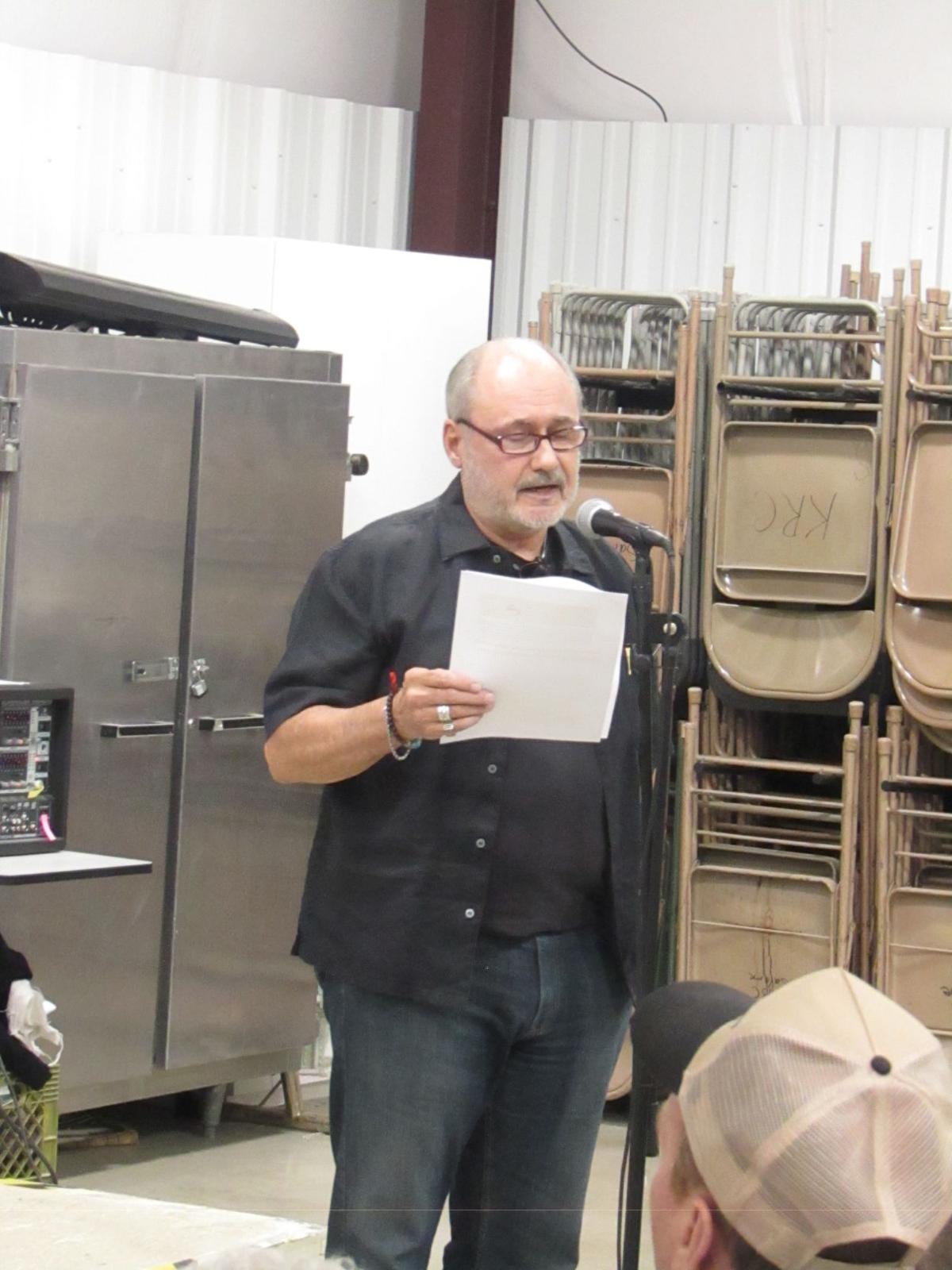 Gary Saiter, the head of the Wenden School Board and the board of the Wenden Water District, said he was concerned about possibly hazardous materials being used so close to populated 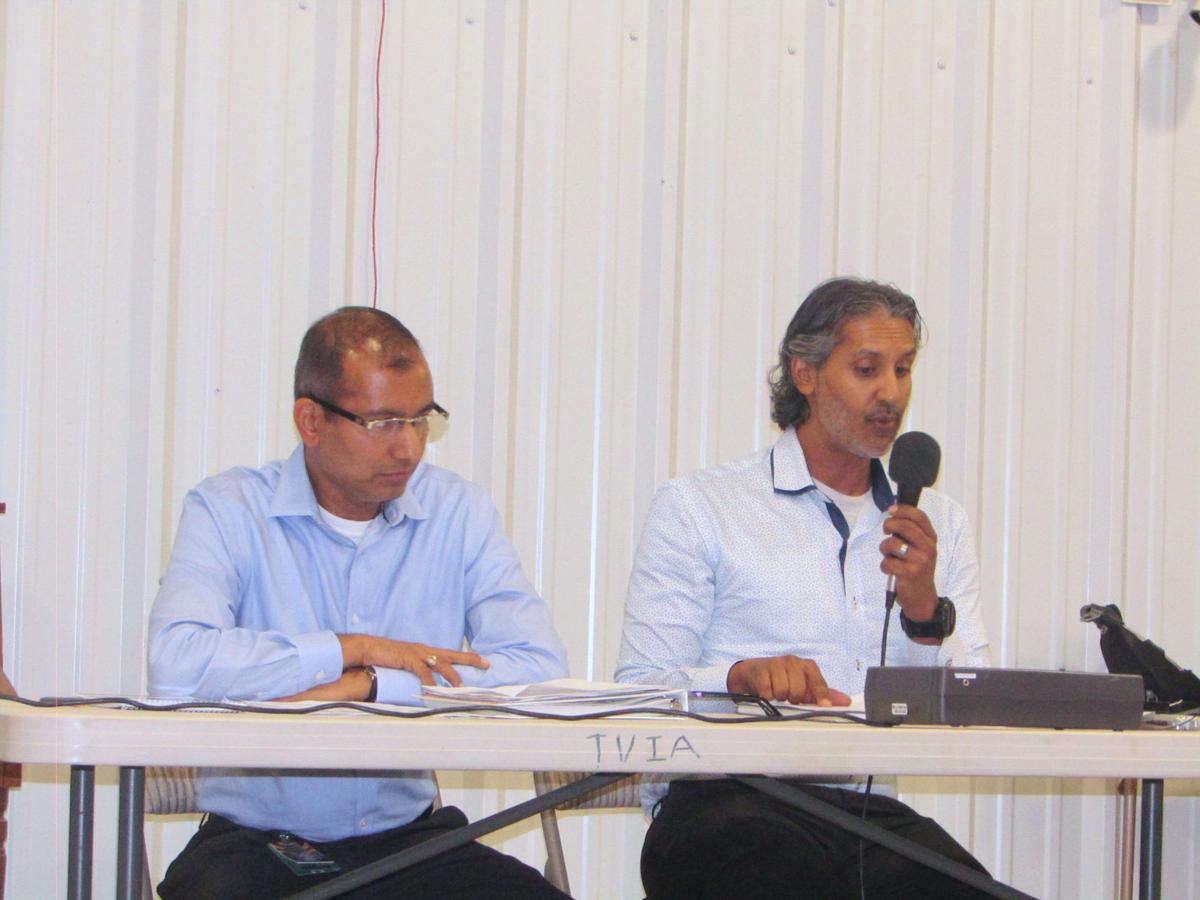 Salome and Wenden residents were at the Centennial Community Center Sept. 4 for an ADEQ public hearing on an air quality permit for a proposed aluminum smelter to be built between Salome and Wenden. Several speakers commented that, if the winter visitors were back, the center could not have held the audience.

Wenden resident Larry O’Daniel spoke against the proposed smelter at its planned location. He said it should be put in an area zoned for heavy industry.

Gary Saiter, the head of the Wenden School Board and the board of the Wenden Water District, said he was concerned about possibly hazardous materials being used so close to populated

Residents of the Salome and Wenden had plenty to say to representatives from the Arizona Department of Environmental Quality Sept. 4 at a public hearing held at Centennial Community Center between Salome and Wenden. They let their thoughts be known on a proposed aluminum smelter plant in their community.

The hearing was part of the public comments process on an Air Quality Permit application from Technocon International, which is doing business as Alliance Metals Southwest LLC. They plan to build a facility that would melt down and recycle scrap aluminum. They plan to invest about $30 million and create 30 permanent jobs.

Proponents of the facility say it would bring in jobs and revenue for the county. Opponents question the location and the level of pollutants. They were also concerned over potential problems with hazardous materials. Many of those who spoke at the Sept. 4 public hearing said they didn’t mind the plant coming, but they wanted it in a different location. They wanted it in an area that is already zoned for heavy industry.

The location will be at 70050 U.S. 60 in Wenden, near the entrance to Centennial Park. The property once housed a large cotton gin. District 3 Supervisor Holly Irwin and County Community Development Director Jeff McCormick said it is currently zoned for agriculture, and would need to be rezoned for heavy industry if the plant is to be built there.

Irwin told the Pioneer in an e-mail the parcel is currently zoned RA-40 (Rural Agricultural-40 acres minimum) and that Alliance has petitioned for a rezoning to Light Industrial. This has not gone before the Planning & Zoning Commission. Alliance has also requested an application for a Conditional Use Permit, but an application has not been turned in to the county.

“The current zoning does not allow for this type of facility,” she said. “No permits have been issued.”

McCormick said parcels along Vickburg Road north of Interstate 10 have been zoned for Heavy Industry.

The hearing was presided over by ADEQ Hearing Officer Naveen Savarirayan and Facilities Emmissions Control Section Manager Balaji Vaidanathan. The first speaker was Wenden resident Larry O’Daniel. He said he was concerned about pollutants not staying on the property. He said winds would blow pollutants over Wenden, and reminded everyone of the monsoon storm the previous weekend.

“Who knows what would’ve happened,” he said.

O’Daniel said the plant would be too close to homes, schools, their water treatment plant, and a 100-year flood line. He said he didn’t mind Alliance Metals coming to La Paz County, but the site on U.S. 60 was not the place for it.

“If it was in an area zoned for heavy industry, I wouldn’t be here,” he said.

The next speaker was Gary Saiter, the head of the Wenden School District board and the board of the Wenden Water District. He got laughter from the audience when he quoted an Alliance statement that homes could not be seen from their property.

Saiter said the facility should be at least 25 miles from population centers. He noted all of Wenden is within one mile of the proposed plant. He stated that vaporized chlorine will be used in the recycling process. In the event of a major spill, potentially lethal concentrations of chlorine gas could be over Wenden in a matter of minutes.

Saiter also stated first responders in the area are not trained for hazardous materials work.

Like O’Daniel, Saiter said he supported Alliance Metals coming to La Paz County, but not at this location.

Area resident Dean Lyman said this company has never operated a smelter before, and they have a bad record internationally. He asked why they should be trusted to operate a smelter. He added he wanted jobs for the area, but he did not want the smelter where it is proposed to be.

Lyman said they have to protect the desert environment.

“We can’t sit by and let these people come in and pollute it,” he said.

Bonnie Powell said she’d seen an increase in truck traffic on U.S. 60. She asked if ADEQ had calculated the extra pollutants from the trucks.

Several speakers asked what this would do to traffic in the area, as U.S. 60 is a two-lane federal highway. Others commented that only the summer people were at the hearing. If the hearing had been held in the winter when all the winter visitors were in the area, the Community Center wouldn’t have been large enough to hold them all.

The ADEQ officials thanked everyone for their comments. They said all these comments would be taken into account when ADEQ made their final decision on an air quality permit. While they could not answer questions during the hearing, they stayed following the hearing to answer questions from people in the audience.

Technocon is based in Florida. According to an article published at AzCentral.com, it’s run by Jacob Gitman and his son, Larry. They have been linked to more than 80 Florida-based companies, mainly involved in transportation, logistics, telephone service and health care. Jacob Gitman, a Russian national who immigrated to the United States in 1990, told AzCentral.com most of these companies are not active.

The rumor mill about the Gitmans and their businesses have been very active on local social media sites, according to Susan Sewell of the McMullen Valley Chamber of Commerce. She told AzCentral.com that most of it has been negative.

Loren Barton, Alliance Metals USA’s vice president, responded to the AzCentral.com story with a written statement saying Alliance Metals wants to be a good neighbor to the community. He noted the high level of poverty and unemployment in the community, particularly in Salome and Wenden.

“We firmly believe our manufacturing investment will help the community,” he said in his statement on AzCentral.com. “It will also bring in critical new tax revenue for schools, the local community college and the flood control districts. The town have been hit by major floods in recent years.”

Barton said the company is experienced in manufacturing metals, and they will have safety, environmental and operational protocols, standards and procedures to make sure the plant is operated in a safe the environmentally-friendly way.

Barton noted the cotton gin also put out a lot of pollutants when it was in operation.

In a statement e-mailed to the Pioneer, Barton said, “Our innovative operations will make our processes environmentally friendly. The cotton gin that previously operated on the same site produced 1,000 particulate emissions per day during ginning season. Our facility will also use a very small amount of water. We will take significant steps to protect our water supply.”

Barton added there would be only a couple of trucks passing through the facility per hour.

Barton added the company welcomed dialogue and input from the community, as this makes projects better. He said the company is ready to address the concerns of local residents.

La Paz County District 3 Supervisor Holly Irwin said the hearing provided her with plenty of food for thought. She said the zoning would have to be changed for the plant to be built.

“Right now, it just isn’t zoned for that,” she said.

I worked for ADEQ - they are born liars. They underestimate potential pollution to make it seem like there won't be a problem. Don't buy what they are selling you. Demand pollution monitors, insist they are endangering your family's health.

I am identified in the article as "George Saiter". George is my father and has not lived here in over a decade. My name is Gary Saiter and I am a resident of Wenden. I also serve as the Chairman of the Wenden Water Board and President of the Wenden Elementary School Board.

Weekly coronavirus by the numbers