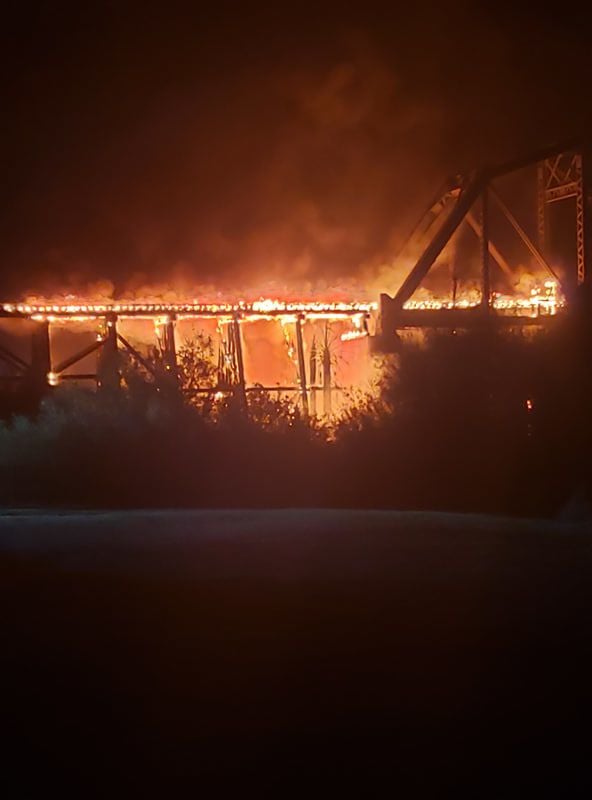 The Arizona & California Railroad's bridge over the Colorado River at Parker caught fire the night of Sept. 14. Most of the damage was on the south end of the bridge, the Arizona side. 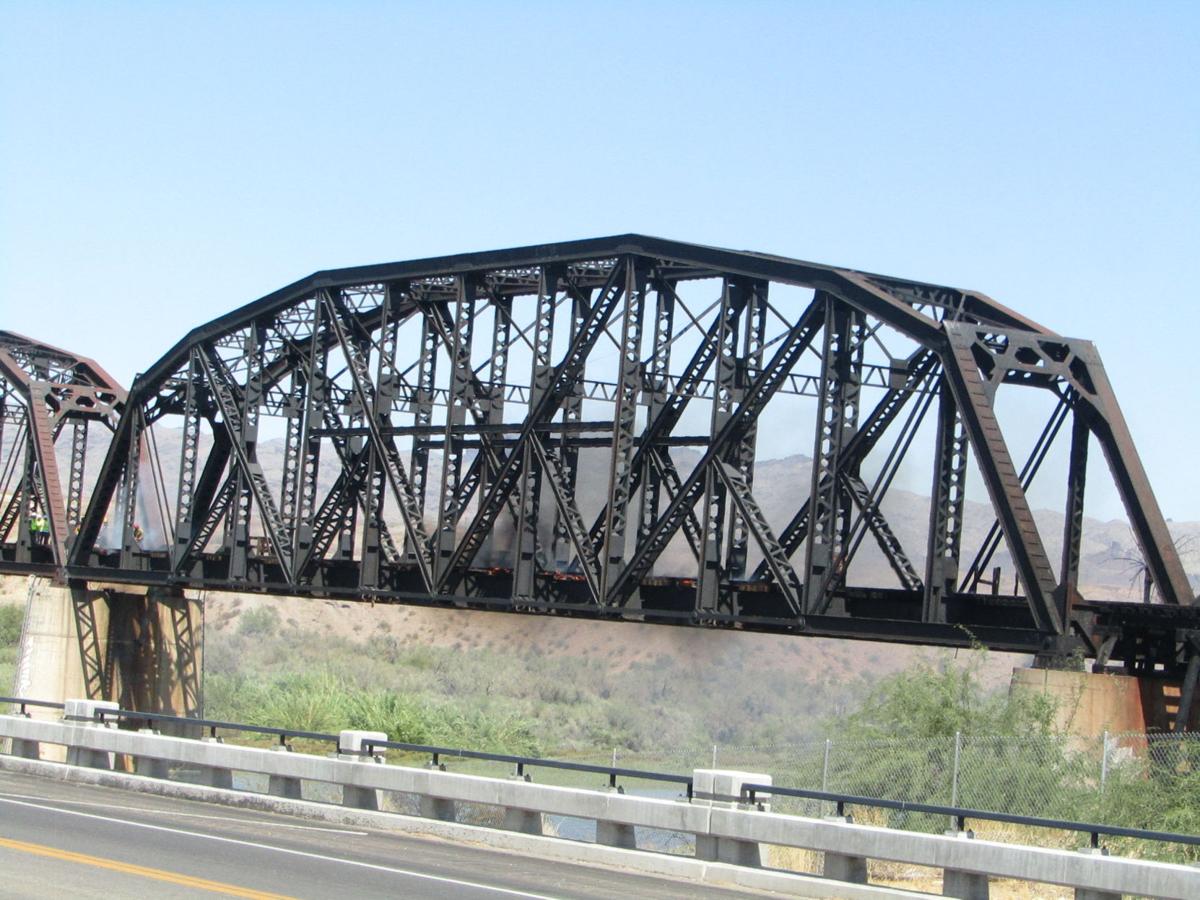 By late the next morning, Sept. 15, small flames were still visible and the bridge was smoldering as crews inspected the damage.

The Arizona & California Railroad's bridge over the Colorado River at Parker caught fire the night of Sept. 14. Most of the damage was on the south end of the bridge, the Arizona side.

By late the next morning, Sept. 15, small flames were still visible and the bridge was smoldering as crews inspected the damage.

The Arizona & California Railroad’s bridge over the Colorado River caught fire late Saturday evening, Sept. 14. The bridge caught fire sometime around 10:45 p.m. The fire burned the southern end of the bridge (the Arizona side) near the entrance to BlueWater Lagoon. The bridge deck and pilings were both burned, and vegetation along the banks of the Colorado River was burned as well.

As of noon, Sunday, Sept. 15, small flames could still be seen and the bridge was smoldering. Fire crews remained on the scene.

No injuries were reported.

Genesee & Wyoming Railroad Services spokesperson Michael Williams told the Pioneer in an e-mail that the fire was still burning in hot spots as of Sunday afternoon, and railroad ties were being removed to keep the fire from spreading. Genesee & Wyoming is the parent company of the A & C.

“The railroad has begun mobilizing contractors and materials and expects a two-week outage,” Williams said. “But it’s early in the process and pending damage assessment. The railroad’s customers are all east of the bridge, so we are working to route traffic to the east.”

Williams said state and federal authorities are investigating the cause of the fire.

Buckskin Fire Chief Troy Maloney said the wooden support structures on the Arizona side of the bridge were heavily heavily involved in fire and a brush fire had started below the bridge. These were quickly extinguished, but the fire had spread to railroad ties further out in the steel sections of the bridge. Maloney said firefighters couldn’t reach these sections with their water streams.

Early in the morning of Sept. 15, Maloney said the decision was made to have Parker and Buckskin firefighters use chainsaws to remove ties to make a fire break. The other ties would be allowed to burn out. He said the bridge would be monitored by the railroad.

Maloney said motorists, boaters and others are advised to use caution when near the bridge.

“People in the area are highly recommended to stay out from under the bridge as large pieces of burning railroad ties will continue to fall into the water,” Maloney said.

Maloney added no cause has been determined.

Among the emergency agencies that responded to the blaze were the Colorado River Indian Tribes, Parker, and Buckskin Fire Departments, San Bernardino Fire, Quartzsite Fire, and Bureau of Indian Affairs Wildland crews.

The A & C is a short line based in Parker. They operate a main line from Cadiz, Calif. to Matthie, Ariz., with trackage rights over the Burlington Northern-Santa Fe into Phoenix. They had a line from Rice, Calif. through Blythe to Ripley, but that line has mostly been abandoned. They interchange with the BNSF at Cadiz and Matthie and Union Pacific in Phoenix.

According to the Genesee & Wyoming website, the A & C’s principal commodities are agricultural products, construction products, lumber and petroleum products.

The largest shipper on the A & C is Rose Acre Farms’ Lone Cactus Egg Farm south of Bouse.

The bridge was completed in 1908 as part of building the original Arizona & California Railway, which took place from 1903 to 1910. The line was a subsidiary of the Atchison, Topeka & Santa Fe, or as it was commonly known, the Santa Fe. The Santa Fe was looking for a shorter route between Phoenix and the big markets of California.

The railroad played a key role in the development of Parker. The Santa Fe needed an operations center for the line, and the most likely place was where the line would cross the Colorado River. This point was in the middle of the Colorado River Indian Reservation. Congress deeded one square mile of CRIR land to the railroad. This became the site of the Town of Parker.

The Santa Fe operated the line until 1991. Seeking to cut many of their secondary lines, the line between Matthie and Cadiz was sold to ParkSierra Railgroup and the newly reconstituted Arizona & California Railroad began operations in May 1991. ParkSierra was sold in 2002 to RailAmerica, which was sold to Genesee & Wyoming in 2012.