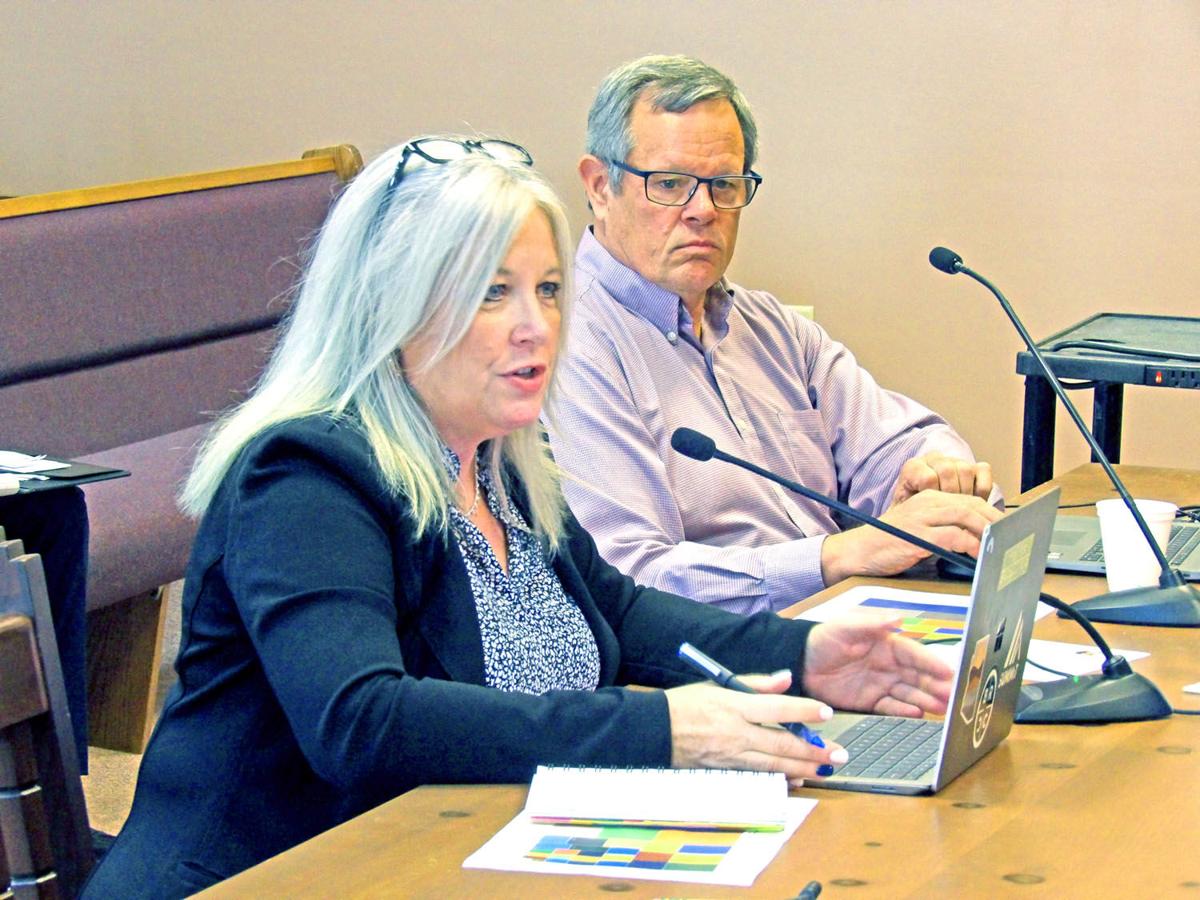 Financial consultants Vanessa Burke (left) and Russ Branson of the Pun Group explained various options for cutting expenses in La Paz County’s general fund at a July 12 work session of the County Board of Supervisors. 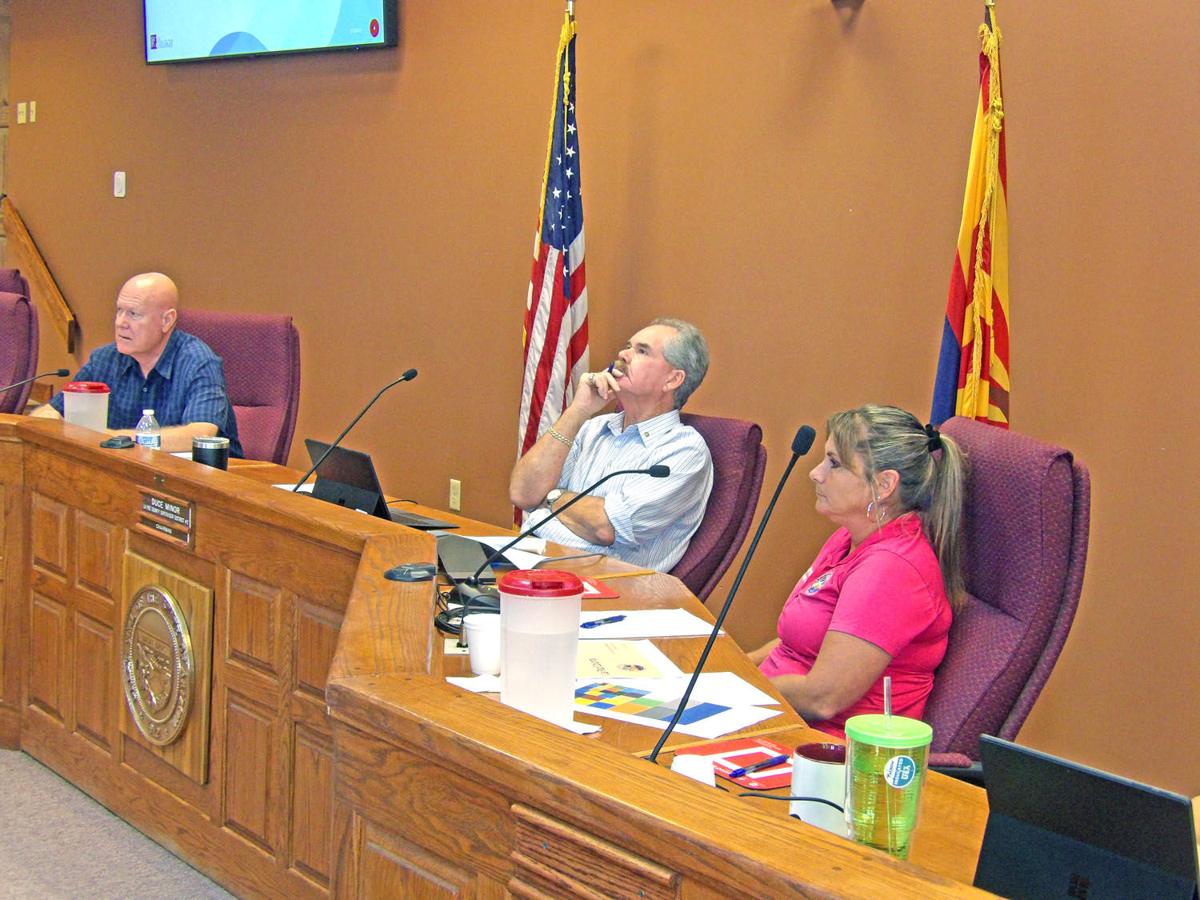 The La Paz County Board of Supervisors (from left) Dave Plunkett, Duce Minor and Holly Irwin, listen to presentations at a July 12 work session on the county’s budget for FY 2021-22. Minor is looking at information presented on an overhead screen, one of several screens recently installed in the county boardroom.

Financial consultants Vanessa Burke (left) and Russ Branson of the Pun Group explained various options for cutting expenses in La Paz County’s general fund at a July 12 work session of the County Board of Supervisors.

The La Paz County Board of Supervisors (from left) Dave Plunkett, Duce Minor and Holly Irwin, listen to presentations at a July 12 work session on the county’s budget for FY 2021-22. Minor is looking at information presented on an overhead screen, one of several screens recently installed in the county boardroom.

UPDATE:  The County Supervisors approved La Paz County's tentative budget for the 2021-'22 fiscal year on July 20. The Pioneer will have details in a later story.

The La Paz County Supervisors are looking at how to eliminate a projected $2 million shortfall in the county’s general fund for fiscal year 2021-22. At work sessions with the county’s financial consultants July 12 and 14, various options were discussed, including a hiring freeze and furloughs for county employees of two to four days per month. The Supervisors made it clear such actions towards employees are not something they want to do.

“These things are not fun,” the Board’s Chairperson, District 2 Supervisor Duce Minor, said.

Spielman said the county needed to make “smart and sustainable” changes to meet the current shortfall and have a better financial future.

“This is it,” she said. “We have to do this now. Everyone in this organization must decide what they want to give up today so we will have a sustainable future.”

The July 12 work session included a presentation from consultants Vanessa Burke and Russ Branson of the Pun Group, the financial advising firm hired by the county. They said the projected revenue for the general fund is $15.1 million, but expenditures are projected at $17.25 million. This will produce a shortfall of $2.15 million.

Burke said a healthy general fund would have a surplus of 16.67 percent. Given the funds needed to have an adequate contingency, Burke said 23.6 percent of the county’s general fund is deficit.

For the general fund to become financially sound, Burke said they will need to address the $4.1 million shortfall from previous years and add an additional $3 million.

“Only a small portion of revenue is within your control,” Burke told the Supervisors. “The county must learn to live within the limits of its revenue sources.”

Branson said 63 percent of the county’s labor costs, or $12.2 million, came from the general fund. About $7 million came from other funds. He said the Sheriff’s Office and the jail had the highest labor costs of all the departments.

Burke said 70.5 percent of the county’s general fund expenditures go to employee salaries and benefits. She added the county has 275 employees.

Burke and Branson offered several alternatives for employee costs. These included a hiring freeze and simply not filling open positions. They also offered two furlough options. To furlough county employees for 8 hours per week would produce a $1.06 million surplus for the general fund. To furlough county employees for 8 hours every two weeks would produce a surplus of $415,000 for the general fund.

These furloughs would apply to non-public safety employees.

Spielman said her preference was for a hiring freeze and furloughs. She said they were also looking at consolidating some county departments.

District 3 Supervisor Holly Irwin said some departments have employment requirements due to grants and other outside funding that they receive. She said she was glad they were talking about furloughs and not Reductions-in-Force (RIF).

Two county department heads had comments regarding the proposals. Sheriff Will Ponce said regular public financial reports were needed. These would allow department heads to keep better track of their budgets and how much money they actually had to spend.

Assessor Anna Camacho asked how much county employees would lose per year with the furlough proposals. She was told it would be an average of approximately $2,900 per year.

Minor said he wanted solutions to the shortfall that did not include furloughs or any reductions in pay for employees. He said that would be best for everyone. He said it was up to the department heads and the staff to do what they could to make furloughs unnecessary.

“It’s horrible that we’re talking about people’s lives and livelihoods,” he said.

Minor added that the county needs to adopt policies and habits so they do not have more financial crises in the future. He said the county had started following such habits during and after the 2017 financial crisis, but they stopped following these ideas and began falling back on old habits.

“I hate it that we’re here,” he said. “We did this to ourselves. We were making progress in 2017, but we stopped following those ideas. If we don’t stick to it this time, we’ll be right back here. I want to get this done right, so we don’t end up here again.”

Minor said the county will adopt a budget, and the supervisors will get monthly reports so they can make adjustments to the budget if they are needed. He added he felt confident the supervisors were getting real numbers to work with.

“We were getting smoke and mirrors,” he said.

“The numbers aren’t pretty,” he said. “We’re trying to minimize the pain for everyone.”

more hot air from the talking heads. can't have it all iL Duce. gonna have to cut cut cut. furlough furlough furlough. you are part of the problem too. all 3 of you are. the buck stops at your level. the county couldn't run a free lemonade stand here in august without mucking it up. who hired ronny and terry? ooops a daisy! none of you can figger out how to make a buck off all the snowbirds and kal lee fornians that come here. maybe see if we can just let san berdoo county annex us. no more rabbits out of hats. all ya got left is more smoke and more mirrors.

Don't worry folks. The Supervisors, all other elected officials, and department heads are sure to get their entire paychecks. No furloughs for them. They're too important to miss days of work, but everyone else, they can do without. Also remember that the elected officials will be getting raises. Not until January 2024, but at least they have something to look forward to, unlike the rest of the County employees. The Supervisors, Recorder, Assessor, Treasurer, and School Superintendent will go from $63,800 to $83,800 on Jan 1 2024. Sheriff will go from $100,824 to 120,824, and Attorney will go from 123,648 to $143,648. While they don't vote or enact their own raises, I'm sure that they and their mouthpieces in the various Associations bent the ears of the State legislators that make the laws that pay them. And don't forget that their retirement costs will also go up, along with the amount of their retirement, when they actually do retire. I propose that we move them along quicker into retirement, BEFORE those raises take effect. And while County employees won't be getting any raises (and haven't got anything substantial for decades) the elected officials who will decide to cut YOUR hours, your pay and your benefits will be enjoying a 32% raise. Anyone really think they deserve it?

Quick correction. Their raises will take effect January 2025. But you all get the idea.

spot on former boatcopper. of all the problems we have in in Peace County, one of the biggest is no one really to choose from a field of candidates. all we get is a worse selection of grifters and other riff raff. if their were any money in this county, we would have a bigger field of refuse to pick from. our refuse isnt even good enough to hold a position in the Metro area. but they are able to land a spot here. google ol ronnie drake. that carpetbagger moves around a lot. cant hold a position too long. hes a perfect example of all we get. as much as i love living here, all la paz is, is a place for hack govt types, snow birds in the winter and kommiefornians in the summer.

While we're on the subject of County representatives (they aren't "leaders", by a long shot) and the transparency that should exist, why haven't they posted the minutes from their various meetings? No updates since March? How about it new County Administrator? Are you going to post the Supervisors meeting minutes? Or just do the very minimum, like all those before you? If you and the Supes are proud of your decisions, then put them out in public, instead of delaying the postings for months in hopes that people forget about them.

wait and see judge quickle will be out.