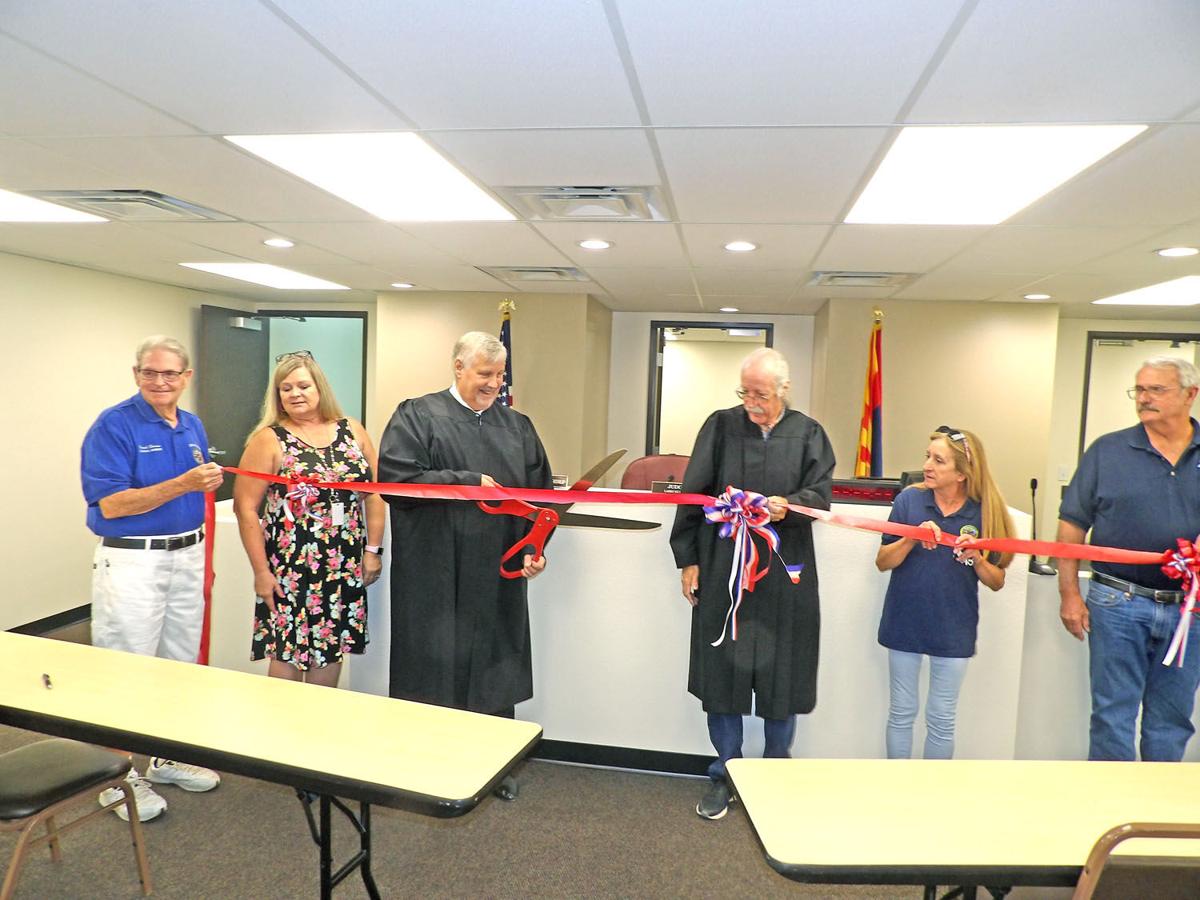 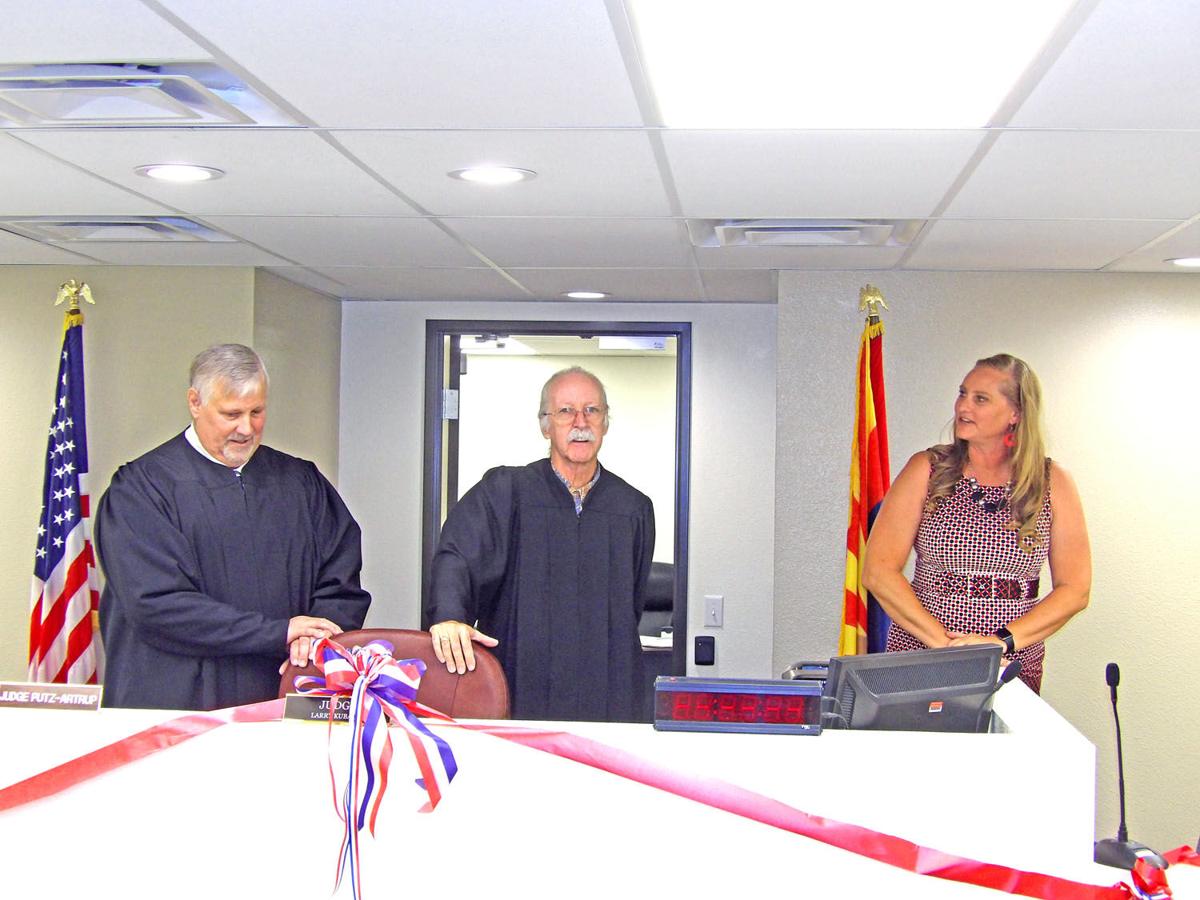 Magistrate Pro Tem Jim Putz-Artrup (center) spoke to the audience at the ribbon cutting ceremony May 27. He was flanked by Magistrate Larry Kubacki (left) and Melissa Newton of the Parker Regional Chamber of Commerce & Tourism. 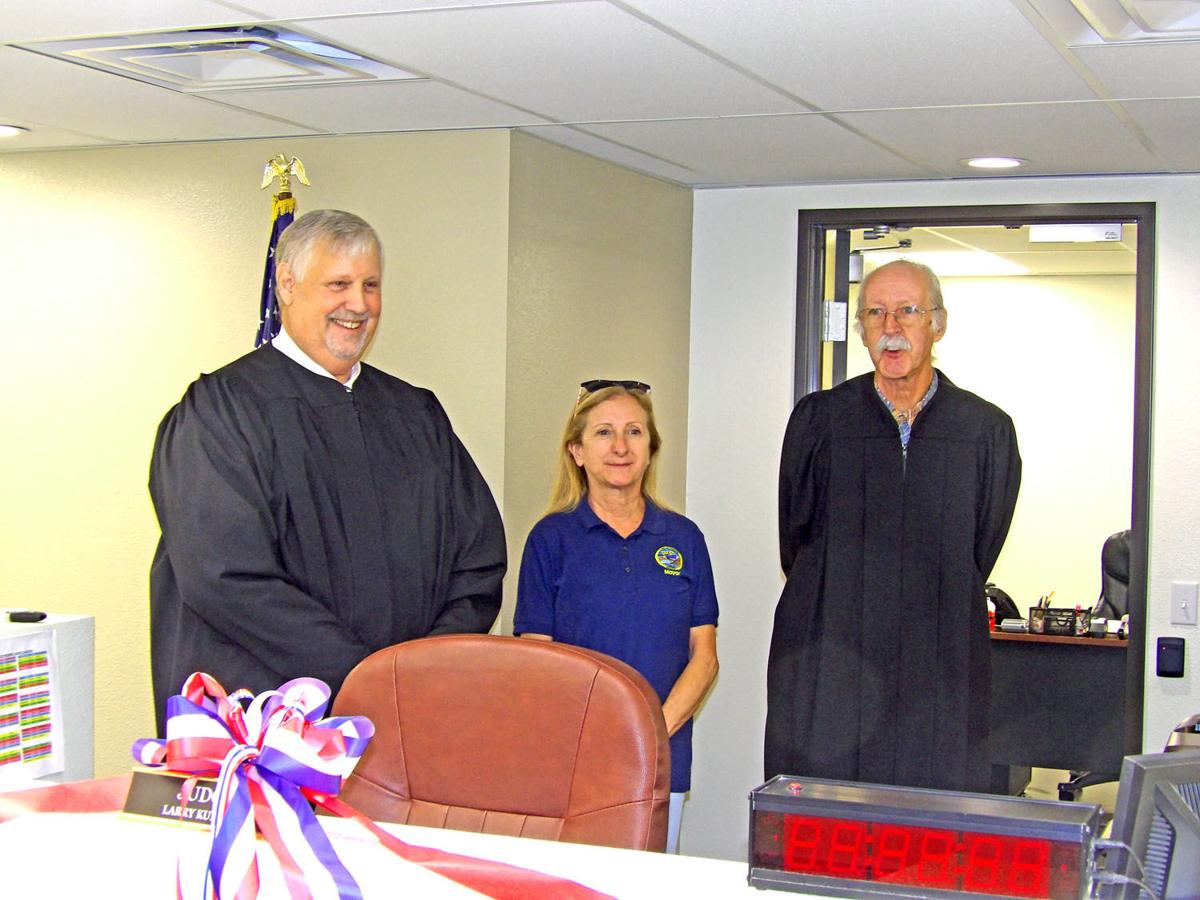 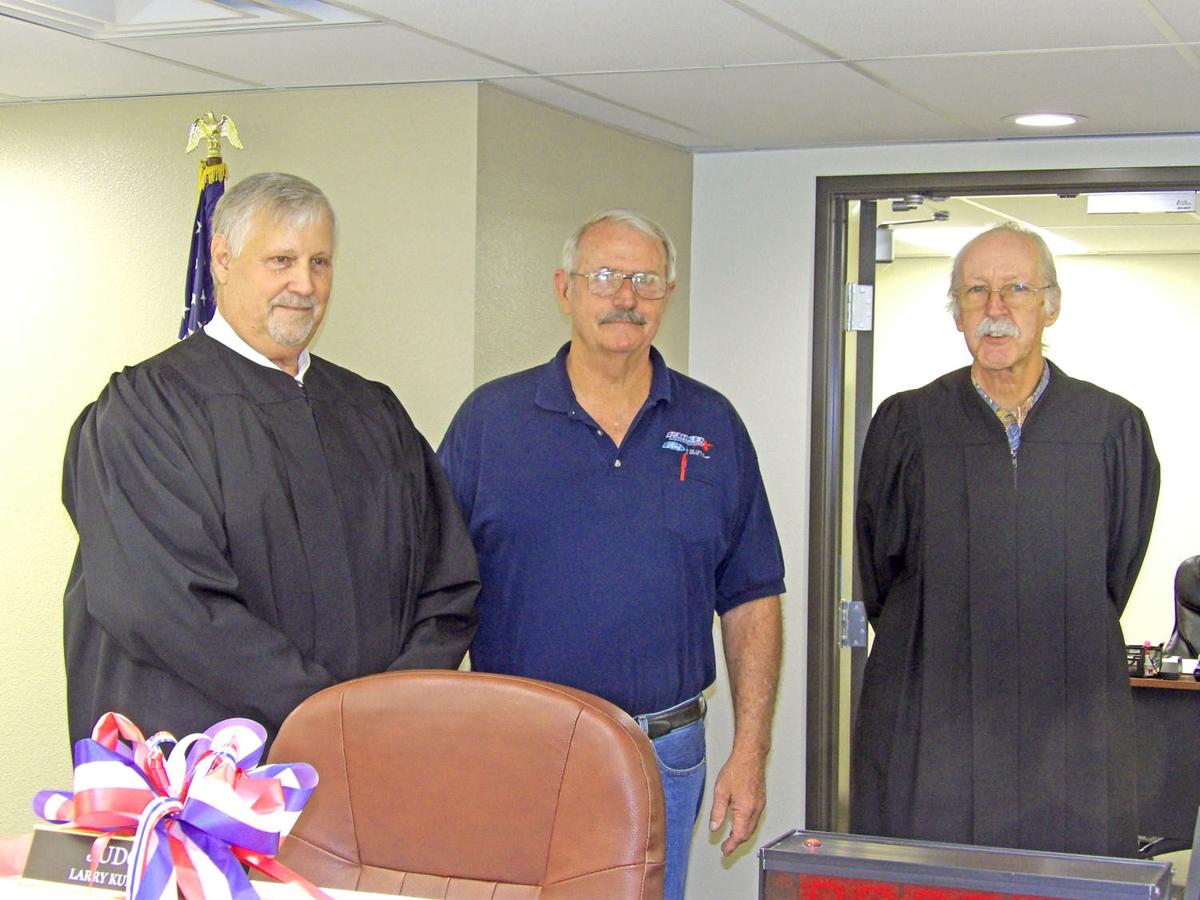 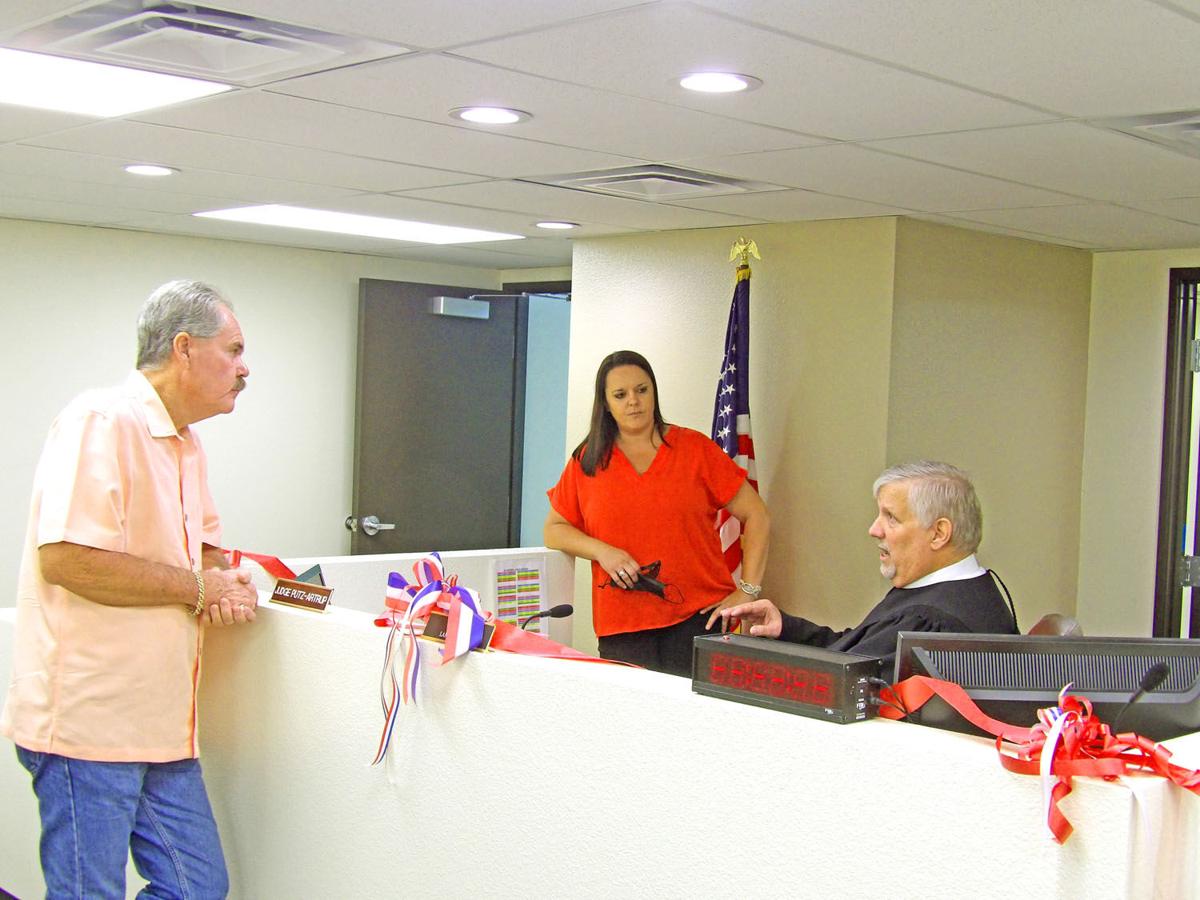 Magistrate Pro Tem Jim Putz-Artrup (center) spoke to the audience at the ribbon cutting ceremony May 27. He was flanked by Magistrate Larry Kubacki (left) and Melissa Newton of the Parker Regional Chamber of Commerce & Tourism.

The Town of Parker celebrated the new home for the Parker Magistrate Court with a ribbon-cutting on Thursday, May 27. While the court moved from Town Hall into its new home in December and started conducting business in January, the ribbon-cutting was delayed due to Magistrate Larry Kubacki being ill with the coronavirus.

The new courthouse is located at 1112 Arizona Avenue.

Kubacki spoke at the ceremony, which was held in the courtroom. He thanked everyone who worked on getting the new facility built, and he thanked Magistrate Pro Tem Jim Putz-Artrup for filling in for him while he was ill.

Kubacki also thanked everyone for their prayers and well-wishes when he was ill. He said they meant a lot to him.

Putz-Atrup said this was a facility Parker residents would be using for a long time. He thanked Public Works Director Steve Ziegler for coordinating the construction, and thanked the Town Council for developing the project.

Parker Mayor Karen Bonds said she was pleased with the facility, and thanked everyone who came by for the ribbon-cutting.

Former Mayor Dan Beaver said this project took a lot of time and met a lot of roadblocks. He was glad to see it was done.

“This was not an easy project,” Beaver said.

Speakers at the ribbon-cutting had plenty of praise for Ziegler and the Public Works crew, as well as the contractor, Mike Sleppy.

Earlier, Kubacki and Ziegler said Sleppy, and his company, River Impact Construction, did a great job at a price the Town could afford.

“I’m thankful Mike Sleppy was able to step up and make a bid we could afford,” Ziegler said. “I think everyone will be happy with this.”

The Magistrate Court will occupy one-half of the building, which had been used for retail shops and offices. The new courthouse includes a reception area with key card access to the courtroom and reception office area, a bullet-proof reception window, a public and private bathroom, file room, court clerk office, jury room, judge’s office, break room, courtroom with judge’s bench, jury seating, and a prisoner holding area.

In addition to the new court facilities, the project included a new roof, redesigned front façade, and new air-conditioning units.

The firm of Spray Systems was hired early in 2019 to remove asbestos and lead paint from the building prior to remodeling. The cost of $13,000 was paid by a grant from the Arizona Department of Environmental Quality. The firm of Seabury Fritz was hired to do the architectural work at a cost of $24,700.

The Town applied for and received a grant from the Arizona Administrative Office of the Courts for $39,322 for security equipment mandated for all the courts in the state. The AOC is part of the Arizona Supreme Court.

The need for this equipment was stated in Administrative Order 2017-15 in 2017, which was prompted by a fatal shooting at the Navajo County Superior Court on June 28, 2016 following a custody hearing.

The order, which was signed by Arizona Chief Justice Scott Bales, said all courts in the state would need to adopt and implement all the standards and procedures set down in the order. The order went into effect July 1, 2017, and state courts had three years to come into full compliance.

Ziegler said the building is mostly complete, but they still have some things to do. A metal detector is planned for the entrance into the courtroom. He added the sidewalk on Arizona Avenue needs to be rebuilt because it is not in compliance with the Americans with Disabilities Act. While the structure itself is in compliance with the ADA, the sloped sidewalk is not.

Ziegler said these are matters that will be taken care of in the near future.

From the Dugout: City Park and a new pool

Normally in this column, I talk about national sports or the Arizona Diamondbacks.…