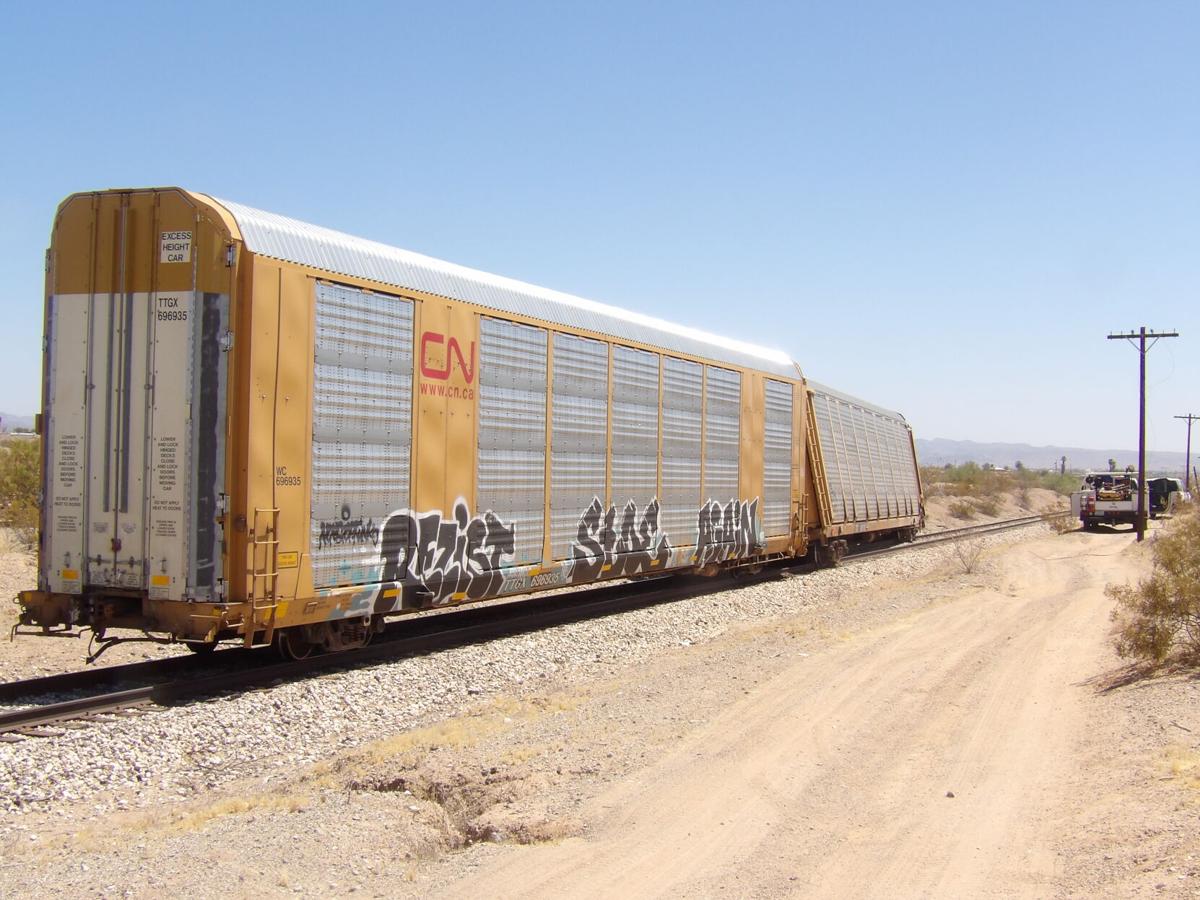 The Arizona & California Railroad had a derailment July 29 in Big River, Calif. The auto carrier on the right was the last car of a 31-car train. The accident is believed to have been caused by a misalignment of the rails due to the summer heat. 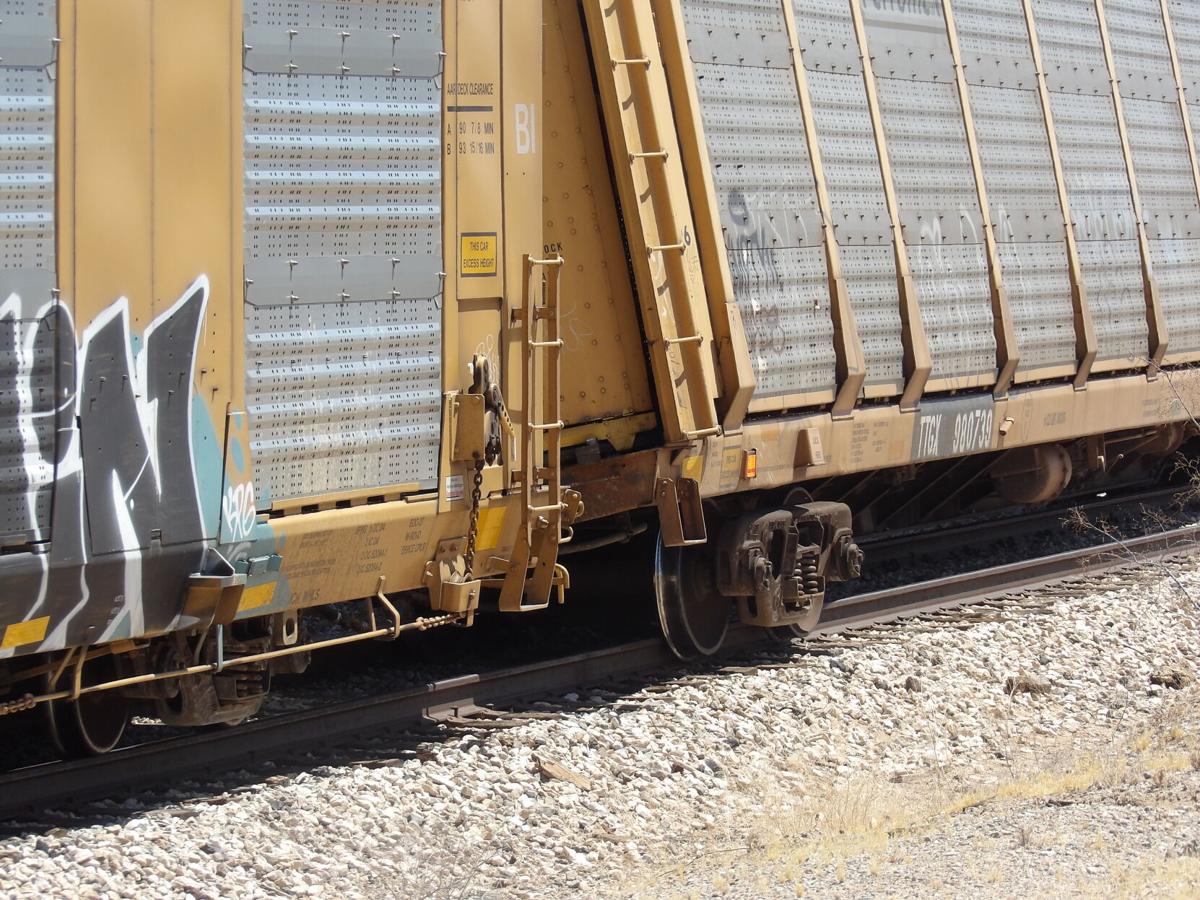 This close-up shows the wheels of the auto carrier that have gone off the tracks.

The Arizona & California Railroad had a derailment July 29 in Big River, Calif. The auto carrier on the right was the last car of a 31-car train. The accident is believed to have been caused by a misalignment of the rails due to the summer heat.

This close-up shows the wheels of the auto carrier that have gone off the tracks.

The Arizona & California Railroad experienced a derailment on their line July 29 in Big River, Calif. While not as disastrous as the Union Pacific derailment at Tempe Lake, the A & C’s line was closed until the following morning.

Michael Williams, a spokesperson for Genesee & Wyoming, the A & C’s parent company, said the car that derailed was the last car of a 31-car train. It was a tri-level auto carrier, and it was empty at the time. The car remained upright and was left coupled to the car that was ahead of it. That car was another empty auto carrier.

Williams said the cause of the accident was determined to be a “thermal misalignment” of the rails. He noted the temperature at the time was 113-114 degrees Fahrenheit.

Extreme heat, like that of the summers in the American Southwestern Desert, can cause problems for railroads and their tracks. In an article dated July 25, 2019 on the Business Insider website, Dina Spector said extreme heat can cause steel rails to expand, causing stress on the rails and the anchors, crossties, and ballast holding them in place. Tracks can buckle in what are called “sun kinks.”

“It makes the tracks look like spaghetti,” Spector said.

According to published reports, sun kinks have causes more than 2,100 derailments in the last 40 years in the United States.

Such derailments can cause property damage and be deadly. In July 2012, tracks warped by the heat were blamed for four coal train derailments in two weeks in the West. Coal trains are particularly heavy, and so are more prone to track problems than other trains might be.

On April 18, 2002, a sun kink caused an Amtrak Auto Train to derail near Crescent City, Fla. Four people were killed and 140 were injured, according to NBC News.

The track problems associated with heat got worse as more railroads went to welded rail rather than traditional jointed rail, John Zuspan of Track Guy Consultants told Progressive Rail in 2013. While the older style allowed for some expansion as there was space between where the rails were connected to each other, that is not the case with welded rail. While welded rail provides a much smoother ride, it is also prone to more sun kinks.

The problems aren’t just limited to America. In 2019, the British website itvnews.com quoted Network Rail, the owners and managers of Britain’s rail infrastructure, as saying tracks in direct sunshine can be as much as 20 degrees Celsius (68 degrees Fahrenheit) hotter than the surrounding air. Rail systems around the continent of Europe suffered extensive delays and disruptions during a record heat wave in the summer of 2019.

The railroads can and do respond to extreme heat by slowing the speed of their trains. Spector said this reduces stress on equipment like locomotives and cars, as well as the track. However, this can lead to delays for trains that are supposed to keep to tight schedules, like passenger trains and commuter services.

As examples, Boston’s commuter rail services had many delays and slowed their schedules in the summer of 2019 due to extreme heat and its effects on the rails. Amtrak faced similar delays to their services in the Northeast at the time.

There are other things railroads can do. Many rail suppliers offer products that help offset the effects of heat, and the rails themselves can be conditioned to handle certain temperatures. Zuspan said track maintenance is essential, and the ballast should be part of that maintenance. Well-maintained ballast can help to keep the rails from becoming so hot.

As for welded rail, Zuspan said the railroads have learned much about the physical qualities of it in the last 20 to 30 years. They have learned methods of how to relieve heat stress, such as “stretching” the rails when they are installed. As a result, the number of sun kinks and derailments have declined.

“That type of rail is here to stay,” Zuspan told Progressive Rail.

From the Dugout: The odds don’t always show how a game is going to go