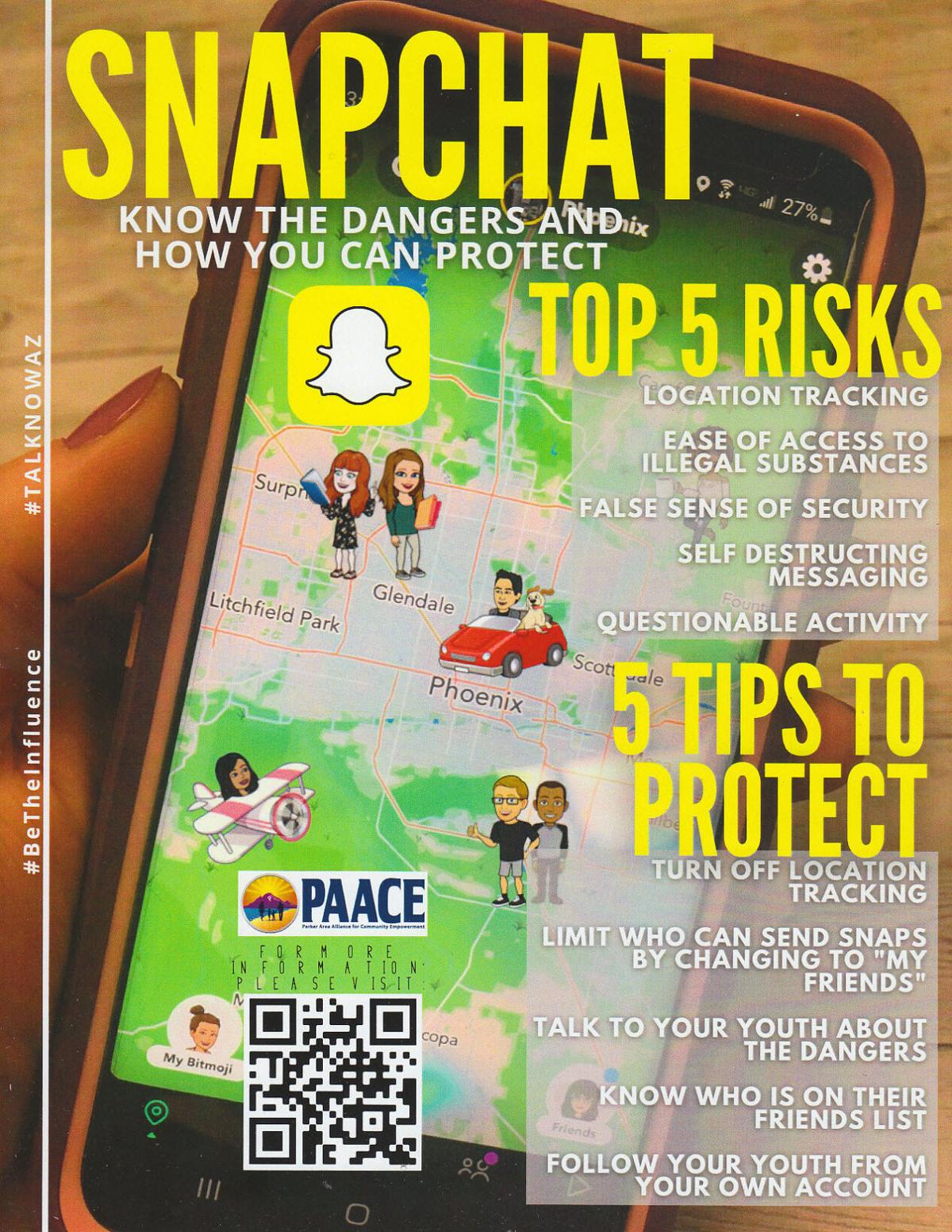 The Parker Area Alliance for Community Empowerment has many flyers and other information on how parents can talk to their children about the dangers of drugs and social media apps. This is one of the flyers they have about Snapchat. 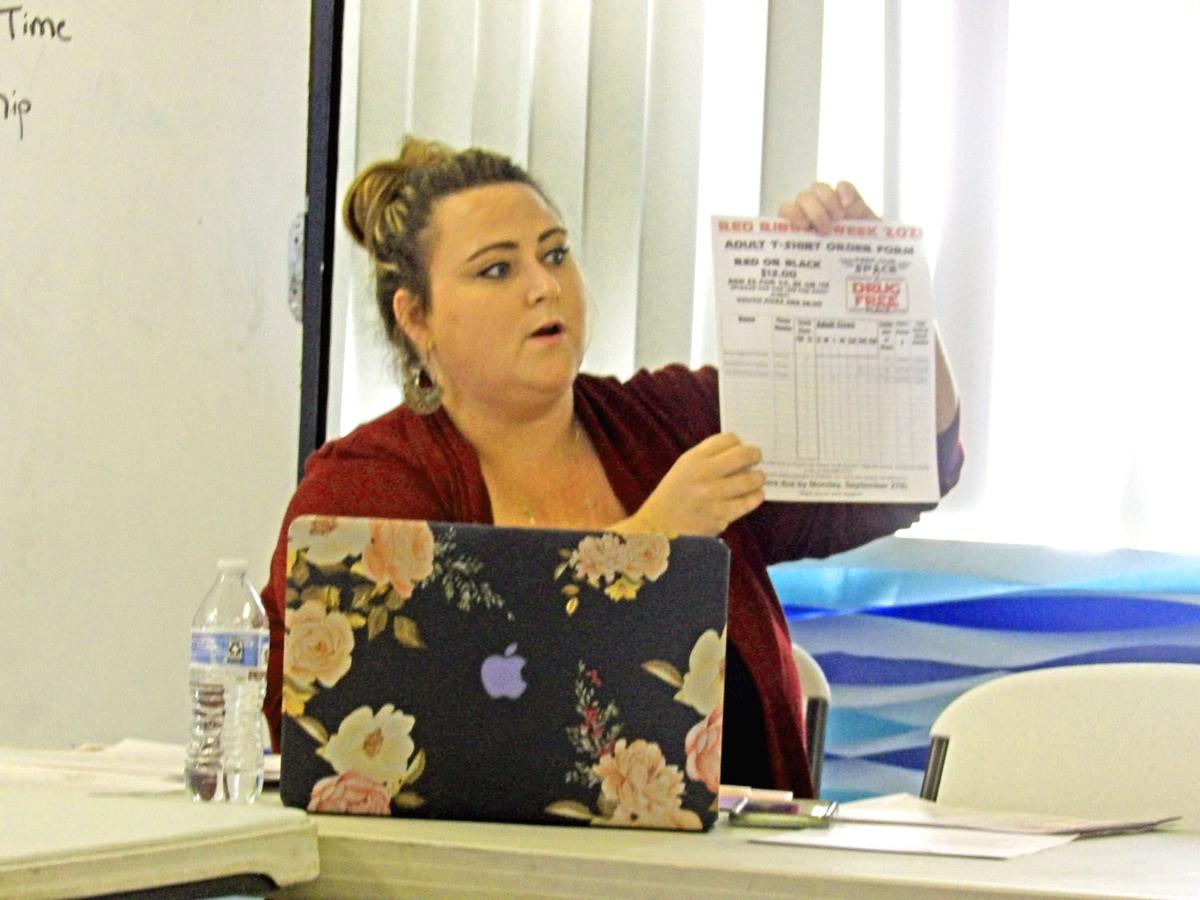 Courtney Kom, the Outreach Coordinator for the Parker Area Alliance for Community Empowerment, is seen at a recent PAACE coalition meeting. PAACE is warning parents on how social media apps are being used to buy and sell illegal drugs.

The Parker Area Alliance for Community Empowerment has many flyers and other information on how parents can talk to their children about the dangers of drugs and social media apps. This is one of the flyers they have about Snapchat.

Courtney Kom, the Outreach Coordinator for the Parker Area Alliance for Community Empowerment, is seen at a recent PAACE coalition meeting. PAACE is warning parents on how social media apps are being used to buy and sell illegal drugs.

Young people are using their smart phones and social media in order to purchase drugs. This is something the Parker Area Alliance for Community Empowerment, the local anti-drug coalition, wants parents to know about. PAACE Community Outreach Coordinator Courtney Kom said one social media site that has become very popular with drug dealers and buyers in Snapchat.

A PAACE flyer about social media and drug use stated the following:  “According to the latest research, more and more youth are getting drugs from social media apps like Snapchat and Instagram. And the drugs are being delivered right to their front door.”

Kom said one of the dangers is young people never know what they might be getting. They may think they’re getting one thing, but the dealer may have given them something else. She said counterfeit pills laced with the potent opioid fentanyl are being sold through social media apps.

“We don’t know what’s happening locally,” Kom said. “But we want parents to understand the apps and how they works.”

Like most social media apps, Kom said Snapchat allows its users to send messages, photos and videos to each other. However, it has certain qualities that make it popular with those selling or seeking dangerous drugs.

One of the qualities that makes Snapchat popular is the ability to make messages disappear. Kom said a message sender can set a timer on a message so it will disappear after a period of time. She said this makes it easy to conduct illegal activity while covering one’s tracks.

The other quality is location identification. One can see where their friends on Snapchat are. Kom demonstrated for the Pioneer how she was able to find where her Snapchat friends were on her smart phone. She said the location finder makes it easier to set up places for illegal drug deals and other activities.

Kom stated there are many positive aspects of social media like Snapchat. She added it can be fun and helpful for young people. At the same time, it can be misused for illegal purposes.

What can parents do? Kom said parents need to learn about how these apps work, and how to follow who their children are talking to online. They can look up Snapchat and other social media online and learn how they work, or they can pick up flyers from PAACE. They can also turn off the location finder in Snapchat on their children’s cell phones.

Perhaps the most important thing parents can do is talk to their children about social media and drug use. Surveys, including the Arizona Youth Survey and surveys among young people conducted by PAACE, have repeatedly shown the major deterrent to drug use among young people is the knowledge their parents will not approve.

PAACE has a lot of information and flyers to help parents talk to young people about drugs in general and social media in particular. Two of the items they have is family contracts for Internet and cell phone use. These contracts spell out in detail what’s expected from young people and parents, and what they will and will not do.

PAACE is located in Players Ninth Street Youth Center, which is located at 1309 Ninth Street in Pop Harvey Park. Their phone number is 928-669-5565. Kom’s e-mail is courtney.paacce@gmail.com.

The total number of coronavirus cases in La Paz County has topped 3,000, and more …