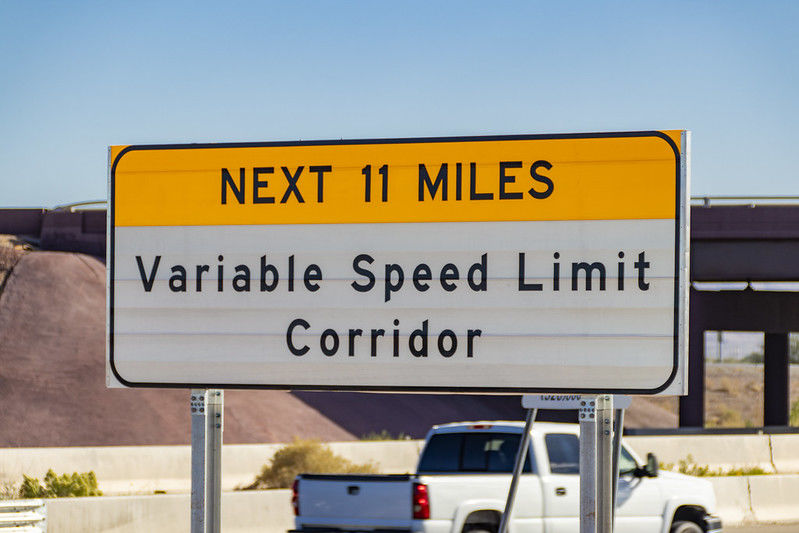 The Arizona Department of Transportation is experimenting with a new dust storm warning system on I-10 between Eloy and Picacho Peak. This system includes speed limit signs that will change reflect visibility and other factors. This sign announces to motorists the start of the system. 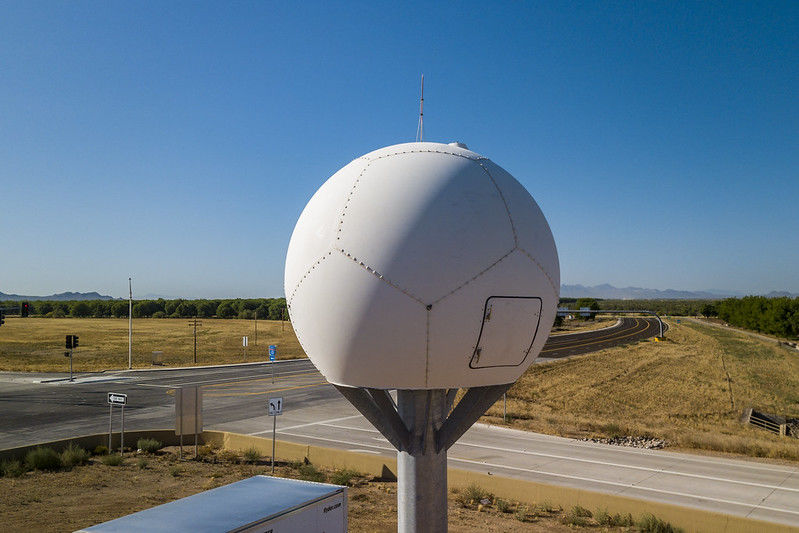 The new dust storm warning system includes this weather radar located at I-10 and State Route 87.

The Arizona Department of Transportation is experimenting with a new dust storm warning system on I-10 between Eloy and Picacho Peak. This system includes speed limit signs that will change reflect visibility and other factors. This sign announces to motorists the start of the system.

The new dust storm warning system includes this weather radar located at I-10 and State Route 87.

The Arizona Department of Transportation is experimenting with a new system to let motorists know when they should slow down due to lowered visibility from blowing dust. Clustered on a 10-mile section of Interstate 10 between Phoenix and Tucson, the system uses visibility detectors, a weather radar system, variable speed limit signs, closed-circuit cameras and overhead message boards.

This first-of-its-kind dust system developed by ADOT is deployed between Eloy and Picacho Peak, an area prone to sudden blowing dust. After completing a 30-day test period, it will be operational for the official June 15 start of monsoon season, the peak time for severe storms that create hazardous driving conditions.

As a pilot project, the system will advance ADOT’s knowledge of whether similar technologies would be effective along other Arizona highways.

While drivers should be familiar with dust storms and warnings to “Pull Aside, Stay Alive,” those passing through the detection and warning zone between mileposts 209 and 219 should be ready for the new possibility of reduced speed limits and other warnings.

Overhead electronic message boards in and near the corridor will alert drivers to blowing dust and warn them to slow down. Speed feedback signs will inform drivers of their actual speeds.

Those highly visible elements of the dust detection system are supported by mostly invisible technologies that work automatically.

Thirteen visibility sensors mounted on posts along the freeway use light beams to determine the density of dust particles in the air. Once visibility drops to certain levels, the system activates overhead message boards and the variable speed limit signs.

The sensors are complemented by a weather radar on a 20-foot tower at I-10 and State Route 87. It can detect storms more than 40 miles away, providing additional warning of incoming storms to ADOT and forecasters at the National Weather Service.

All this technology is monitored by ADOT’s Traffic Operations Center in Phoenix, where staff can see real-time information on conditions such as the speed and flow of traffic. Closed-circuit cameras provide visual confirmation of conditions along the roadway and in the distance.

The roughly $6.5 million system was funded in part by a $54 million federal FASTLANE grant ADOT received for I-10 projects that widened sections between Eloy and Picacho, and between Earley Road and Interstate 8, to three lanes in each direction.

ADOT says none of the technology can replace common sense when it comes to driving in dust storms. While drivers will get almost instant warnings about hazardous driving conditions within the 10-mile corridor, the safest decision drivers can make is to delay travel if a severe storm is on the move. If drivers are caught in a dust storm, drivers should take the next exit if possible. When no exits are nearby, drivers should pull off the roadway, turn off lights and take their foot off the brake.

Arizona’s monsoon season is right around the corner, and that means some structure…

Candidates for Sheriff meet the voters in Bouse